My graph should do the standard preprocessing for a lot of data. Therefore i would like to Read the data, import a shape file for the tool “Land/Sea Mask” to use the shapefile as Mask. Afterthat calibration and terrain correction are done. I could build the graph with all this features but i can’t implement an tool like “import shapefile”. How can i import a shape to use it in the graph builder especially the “Land/Sea Mask” ?

Thank`s Iveci for your answer. I found this solution today. But it only works in the standalone S-1 Toolbox. If i try to implement it in SNAP with the Batch Processing, the first dataset will be ok but at the second dataset the Land/Sea-Mask jumps from “Use Vector as Mask” to “Mask out the Land”. Are there any significant changes in the programming ?

Hi,
I found this topic, which I believe is relative to mine, so I did not want to create a new one.
I want to create a graph builder which does the following steps:
1.Reads a S2 product
2.Imports shape file
3.Resamples the product
4.Perform an unsupervised classification using the imported shape file as ROI
5.Writes the new product.
The problem is that no matter where I have placed the import vector operator I can not select it on unsupervised operator as ROI because it is not recognised. Although the graph does not complain about any error and the shape file is in the same projection as the S2 product I can not find the reason it is not recognising the vector. Besides from that unsupervised classification denies to recognise source band names as shown in the picture. 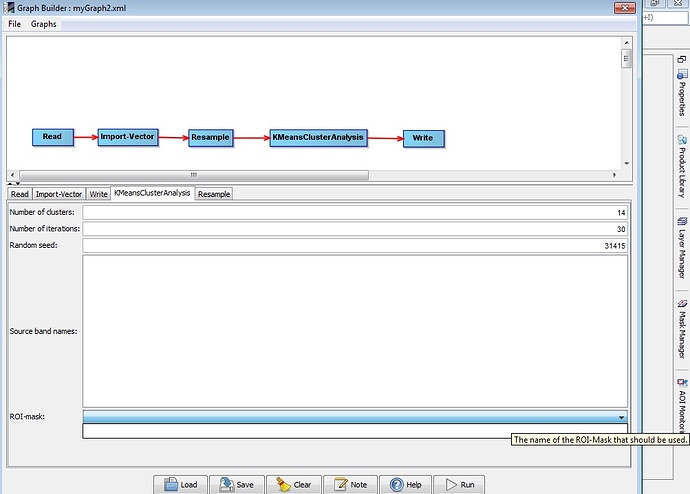 I would suggest to test everything manually in SNAP to see where is the error. My bet is that probably you will have to import the ROI after resampling.