I have been using the snappy library in Python without any problems until now, on a virtual machine. I have just been given a new desktop computer at work and can now work locally, but am now struggling to install Snappy.

I have setup Python with Anaconda 3, and followed the steps listed below:

When I start a python shell and type: import snappy , I get the following message:

Does anyone here know how I can sort this out?

Which Python version are you running. The missing symbol seems to indicate that it is a 3.5+. Unfortunately, snappy Python bindings are for 3.4 only. We are working on this issue right now.

Thank you for your response. Indeed the problem was linked to the Python version. I have managed to complete the install in a Anaconda Virtual Env, using Python 3.4 .

Hi Maxim, do you have some tips regarding the snappy installation in the Anaconda virtual environment ? I can’t have a successful install on my secondary py34 environment.

I would suggest you take a look at this thread if you haven’t already:

Hi - I’m getting started with snappy and python and have been running into problems with the configuration. I’ve referenced the “Configure python to use SNAP” page and all posts on this forum - that have gotten me part way. . . but still not fully there. To start with - I’m using Python 3.6 on mac 10.12. I understand that snappy isn’t yet supported in this python version - but not sure if this is the reason I’m having problems with the install. If I open python3 and try to import snappy I ge…

Thanks for the answer.
I’ll have a look and come back with a comment over the solution and resolved issue if it will do the job :).

I tried installing snappy. My conclusion is that you can use snappy only if your start the script from the snappy interface folder. For example I have installed snappy on C:\Users…snappy\snappy-python, if I run the script anywhere on c:\ the script is working, if I move on D:\ then I can’t use snappy and the script is not working. I’m using an anaconda 3 py34 environment.
Do you have any other opinion ?

I didn’t run into this issue (but I’m on Linux). Probably @marpet can help you…

How have you integrated snappy into your anaconda environment?

Which of the steps have you done of the Configure Python
the section on the Configure Python to use the SNAP-Python (snappy) interface page. What kind of error do you get?
I’ve copied the snappy folder into the site-packages directory.
For me, it works also from another drive. See the image.

First, thanks for not letting me down

Second, I’m resuming in the next rows the steps that I’ve used to enable snappy on Anaconda 3 (x64) .

You can see the difference also in the attached picture. 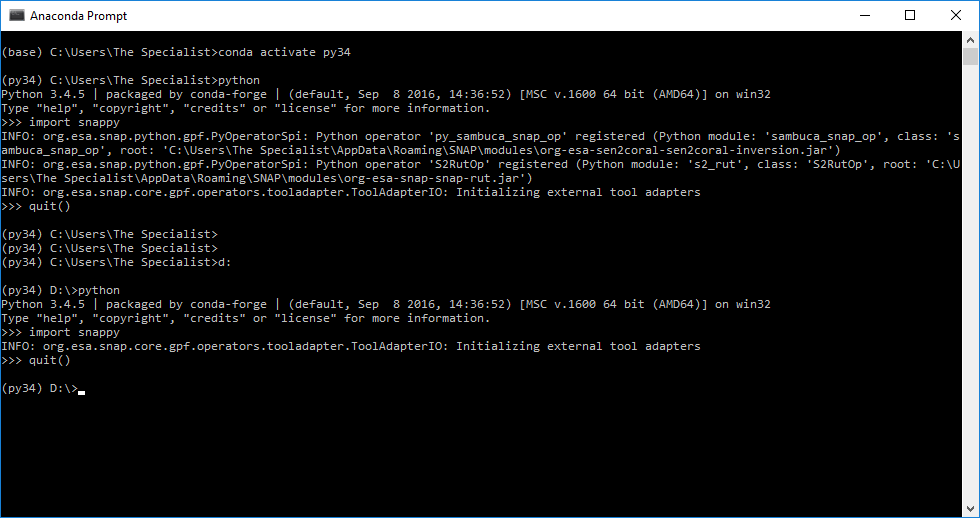 I don’t understand what should I do more in order to make it work.

Okay, now I see the problem and I can reproduce it.

In general your snappy is working and you could use the API. The problem is that some modules are not loaded. I see the same behaviour when I’m on my drive G. The S2RUT is not loaded in my case.
So it seems that modules installed later or updated are not considered.
I guess somewhere in snappy a wrong path is used. I’ll take look. (SNAP-929)

I’ve found the problem and fixed it. For the explanation see the issue SNAP-929

You can work around the problem by editing the __init__.py of snappy.
Go to method _get_nb_user_modules_dir() line 113.
And change it to:

Many thanks for the report @geoagr2003

I will come back with a feedback tonight!

I forgot to mention that the reported issue was causing me also the necessity to write folders full paths in order to read/manipulate files from project location because I had to run the project from C:\ … .

Now, I hope to get my project working straight from its location.

Just finished in dealing with the proposed solution.

Here are the steps that I pursued in having a clean and correct install of snappy, because there was an already installed version of the module (and I wanted to be sure that everything is ok).

First I uninstalled ESA SNAP, installed back without “Configure SNAP for use with Python” enabled.
2.
Run steps from ‘Configure Python to use the SNAP-Python (snappy) interface’ (https://senbox.atlassian.net/wiki/spaces/SNAP/pages/50855941/Configure+Python+to+use+the+SNAP-Python+snappy+interface) until the step:
Windows:
snappy-conf <python-exe> 3. After the step 2) I have operated the proposed changes inside __init__.py 4. After those changes I tried to permanently install snappy cd /snappy
$ setup.py install
No other folder copy was needed.

Wonderfull, now, the snappy module can be used from any location/disk (see the attached picture). All additionally installed modules are imported. Now I can run my sentinel 2 project from it’s location, no full paths are needed inside the developed modules 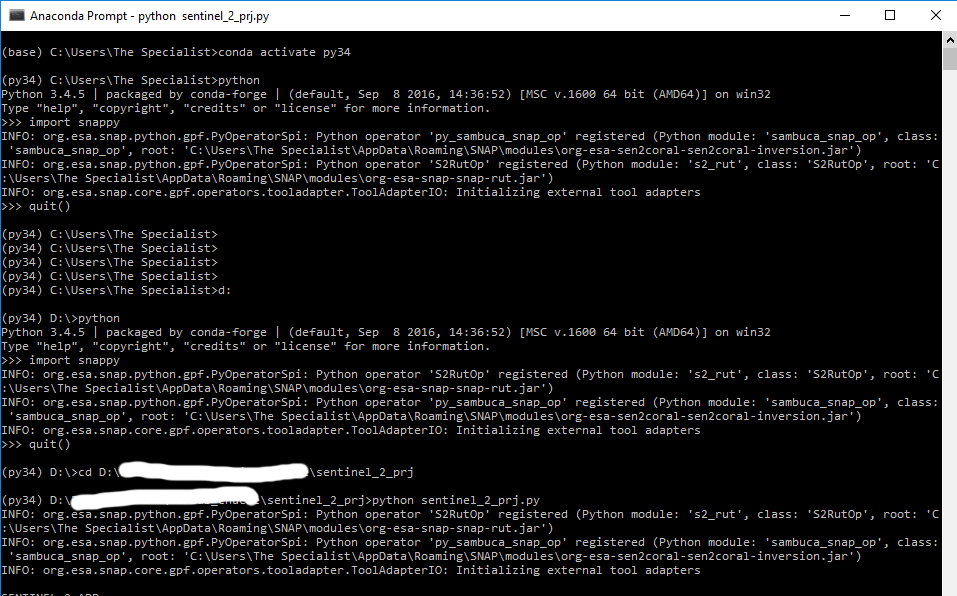