I am using a time series of S1 images to extract backscatter above a point like location, but…these radar images are acquired from ascending orbits with 44 and 34 degree and descending orbits with 41 and 30 degree incidence angles. I think some of you may have come across similar issues while processing a time series. My question is how is it possible to correct for this incidence angle differences and use all the images as one dataset?

Thank you so much

you can calibrate to Beta0 and then perform Terrain Flattening in order to reduce the effect of topography on your image.
But generally, information in shadow areas (slopes facing away from the sensor) is lost and cannot be restored.

Please have a look at my comparison:

Hi, ABraun.
Your above answer solved my present part of confusion, thank you! I have a few more questions to ask you. I used sentinel-1 data(VV+VH,IW,GRD) to do long time soil moisture inversion.The yellow area is the research area. The study area is located at the intersection of the image data of two different orbits. The incident angles of the study area in the left image range from 36 to 36.7 degrees, while the right image ranges from 45.5 to 46 degrees. 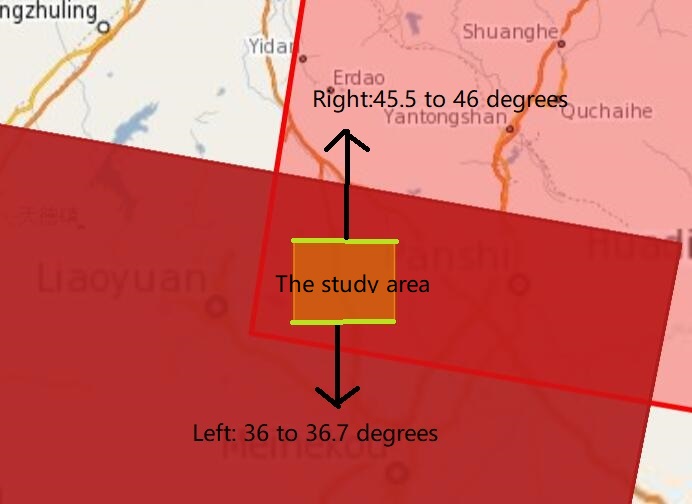 Question 1: Is the sentinel1 data corrected for its incident Angle effect at the ground station or during the processing I mentioned above?

Question 2: In the same research area, are the pre-processed results of images with different incident angles obtained from different orbits greatly affected by the incident Angle effect? If so, do you have a good solution?

Radiometric calibration to Sigma0 corrects for changes in the global (image wide) incidence angle, yes. But it is advisable only to combine images with the same looking direction.

If you want to correct topographic changes as well, you calibrate to Beta0 and apply Radiometric Terrain Flattening. This operator makes use of a DEM (ideally SRTM 1Sec) to adjust the local incidence angle as well and produces Gamma0 as a higher level calibrated product.

Thank you very much for your answer，ABraun.
I’d like to confirm some further information.

Both of my left and right images are descent data. Both images are viewed from left to right. I want to make sure that this is the same looking direction as you said?

yes, this is what I meant.

In terrain correction, I have used SRTM 1Sec for topographic changes correction. Gamma0 can be converted to sigma0 in SNAP? Because the algorithms I studied in the field of soil moisture inversion mostly use sigma0.

When you have a comparably flat study area (or at least the areas in the image which are analyzed), there is no need to calibrate to Gamma0. So radiometric calibration to Sigma0 in the beginning would be ok.

Gamma0 is only needed for strong slopes.

Thank you for your careful reply，ABraun. Thank you very much！