((Now, how can I check that applied orbit and coregistration are correct??))

After this step by clicking on " phase_ifg_vv … " file , only PURPLE is shown on the screen.
please help me on this problem.
It should be mentioned that I used 3 types of DEM ( SRTM - GDEM and ASTER ), but the result is the same.

after the coregistration, you can display both images with an RGB image. To do that, right-click on your stack and select “Open RGB image Window” Select the intensity of image 1 for red and image 2 for green.
It should then look something like this 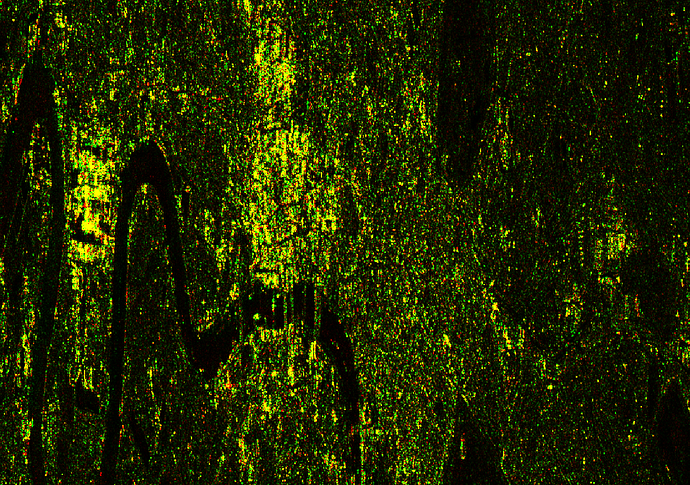 If you see only red or only green, the coregistration failed.

Hi
Thanks ABrun.
Last night I updated SNAP 6 plugins after update my problem solved.( tools menu - plugins - sentinel 1 toolbox kit module )
but my another question is about my interferogram .
On the left and to the right, it shows only the green color.( like like attached image )
What is the reason for this problem? and how can solve it ? 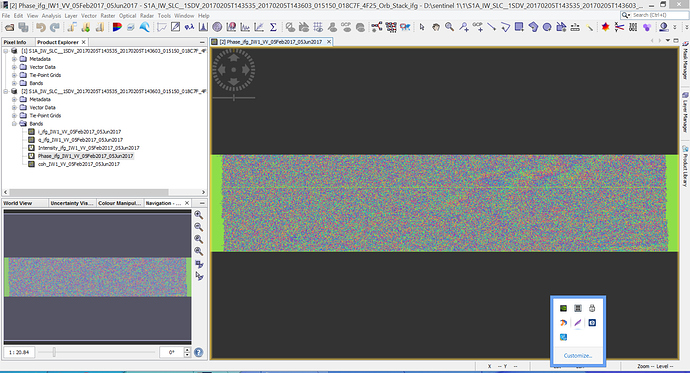 the green color is just some remaining pixels where only one of both rasters is covered. No interferogram can be computed here. You can remove it in the end (creating a subset after terrain correction). I would leave it by now and don’t recommend subsetting the interferogram before the unwrapping because this caused issues in some cases.

@ABraun These exact green pixels are the ones bringing the problems in step1 of stamps!!
Even if this is now solved in my script, it would be nice if the developers could make that those pixels are not saved/exported after doing the StaMPS/PSI export.

Still, I have solved it and I have shared my script with the community. Here again!ps_load_initial_gamma.m (7.2 KB)

I see, thank you for clarification.
I supposed the aim here was traditional InSAR and that is why I suggested to neglect them. But you’re still right, they are unnecessary and in some cases even harmful.

Hi,
Please can You help with step by step Interferogram generation. I have tried to follow this video (https://www.youtube.com/watch?v=sxDgmPYyimg) but afer few minutes these are the error messages 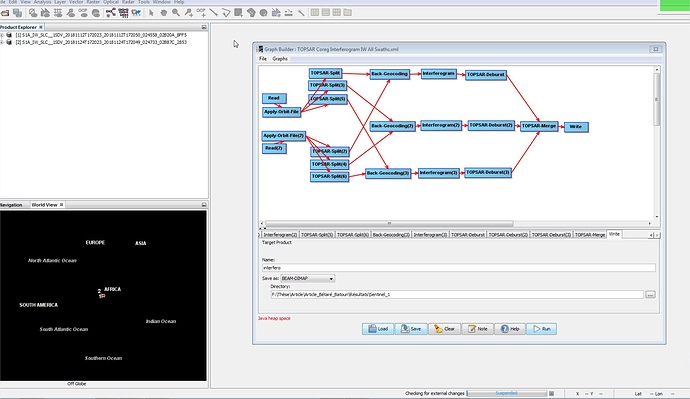 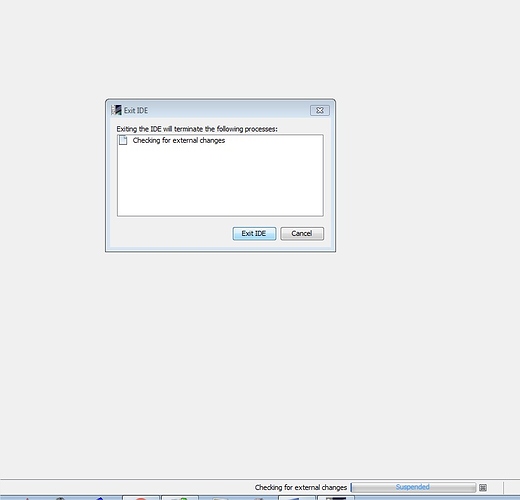 Hi,
I have followed your steps. I have this error message 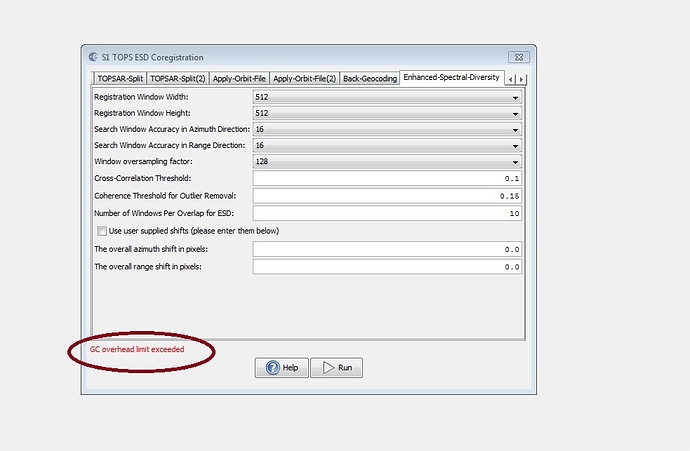 GC overhead exceeded means that your computer ran out of memory. You probably need more RAM.

Hello, I am trying to do the S1 TOPS Coregistration for two Sentinel1 SLC images. The problem is that I am getting the “GC overhead limit exceeded” error. [image] What does that exactly mean? and how can I solve the problem? Thank you.

hello,
do you mean the first image and the image after geocoding?

no the master and slave image after coregistration.

Hi
I imported 2 sentenil-1a slc format in iw mode images to SNAP for subsidence measurement. after interfrogram production, coherence will be like this picture and has consecutive black stripes. could anyone tell me what is the cause of this problem and how can I fix it?
thanks 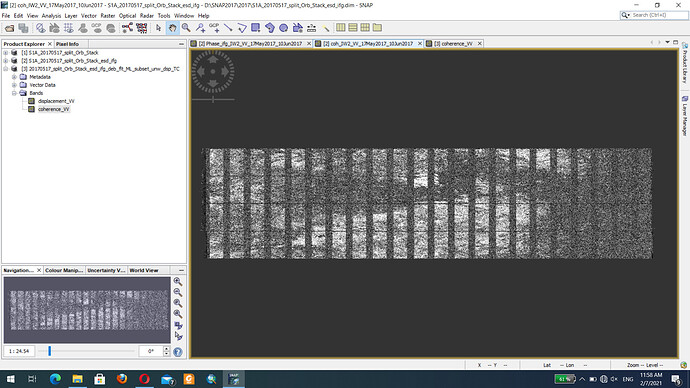 was the coregistration successful? You can create an RGB image to check the quality of backscatter of both dates.

thanks for your answer. this is the RGB image after coregistration. this is not my speciality, my major is geology. in your opinion, is there any problem with coregistration? 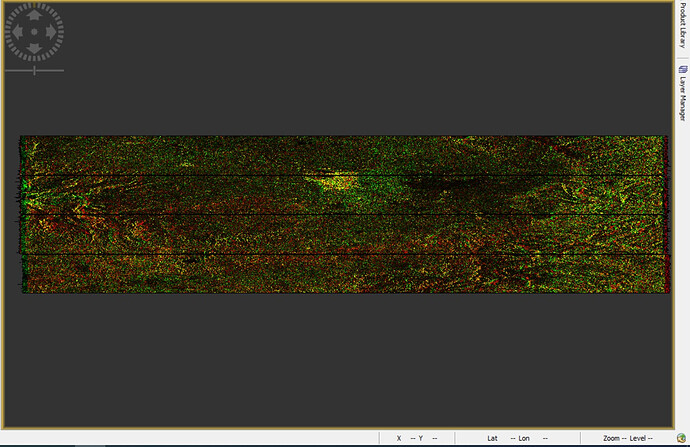 This looks alright so far.

Can you please run the coherence operator separately (not the one within the interferogram generation) and compare the results?

yes, at best with the standard settings

Just to go sure: I meant to run it after BackGeocoding and ESD

I did it but the result is same as coherence within the interferogram production. 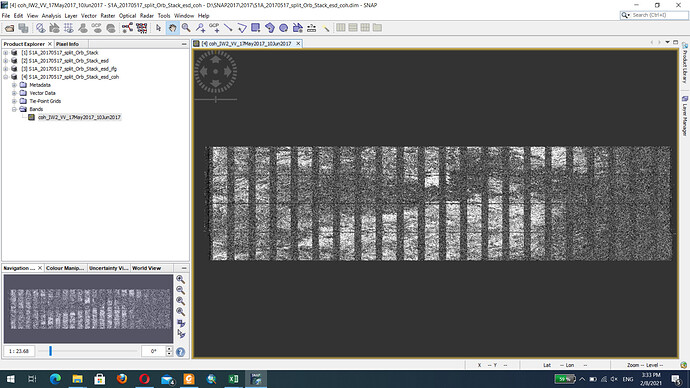 Is this repeatable? What happens when you run all steps again from the beginning?

Have you tried different dates for a test?

I didn’t repeat for these dates, but I tried different dates and there wasn’t any problem.