Interferometry in an undermined region

Hello to you all! I am working on my master thesis on the topic of radar interferometry. The goal is to pick some region and make a time series of a few photos and their interferograms. I am from Czech Republic so I though that I could pick an undermined region (since we have no big earthquakes or volcanoes here) and see whether this affects the elevation somehow. I have already downloaded four photos and now I am trying to do my first interferogram according to the tutorial.

The main question which bothers me is whether the interferometry is a good tool to watch this small movement (if any) with half a year distance. I have a few pictures I would like to show you now and then a few questions 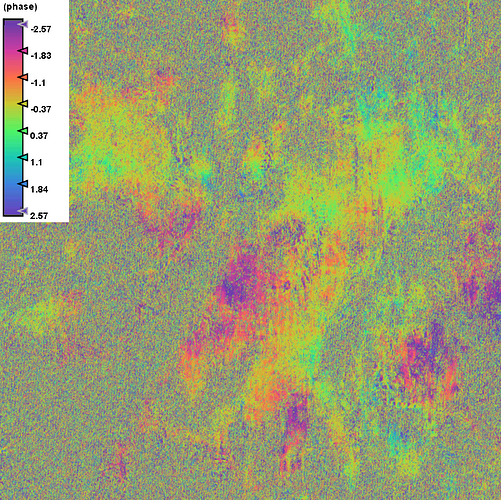 My main questions:
The coherence is good only where the cities are and I know its logical but can you use those photos then for deformation models?
The first two photos I am using are from December 2014 and June 2015, might the better results be by using two photos from just winter season (when there is little vegetation)?
The next step now should be phase unwrapping but is it even viable for this interferogram, would the results be any meaningfull?

I am open to discussion and would be really glad for any kind of response, thank you

Thank you very much for quick reply but I have two complementary questions:

I haven’t done this personally so I cannot give you a detailed answer. I think it would be good to get consecutive pairs that together span a long time-interval (I’m assuming the deformation signal is weak). If the signal is visible in cities you might see it in a single pair with a long-enough temporal baseline. If there’s no deformation nothing will work of course

@mfoumelis should be able to give you a more informed reply.

Ok, I see. For now, I will try to do the unwrapping just to see what kind of result it will give me (and to try whether my PC has enough memory for it, since I have read that it is quite demanding). And that person you mentioned will be noticed by it?

SNAP is good for start, but it does not have to match possibilites for movement calculation. There is export for Stamps. STamps is program that calculate movment form stack of intefereograms. Additionaly is availible GMT5SAR that is independent and does not need SNAP. Both are linux based. STamps also need Matlab for postprotsessing.

Thank you for your reply, I have found some powerpoint tutorial for NEST (todays SNAP I believe) in which stack of interferograms is described. I have only windows so it would be better for me to work in software for windows if it is possible.

Anyway, this is my first outcome: 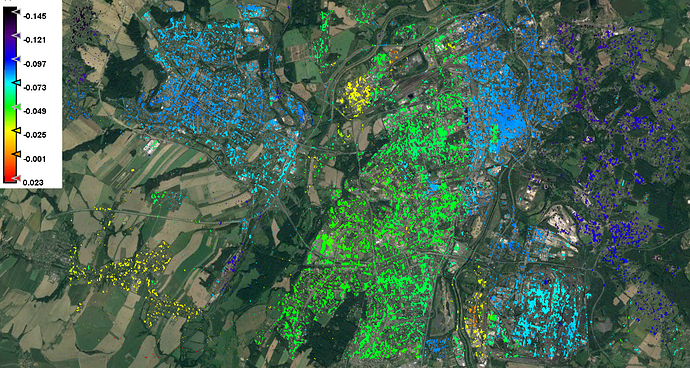 It look wrong though - I mean 5 cm decrease of the land in just half a year? That is probably nonsence right?

could you please share the link to the tutorial with us?

How do you conclude from the unwrapped phase to the 5cm of subsidence?

In the first one, they are calculating displacement by using band math. I did it by the tool “Radar -> Interferometric -> Products -> Phase to Displacement” since I thought it was the right tool.

both the band maths approach and phase to displacement should result in the same values. These are, however, along the line of sight (LOS) of the sensor. So it’s not pure uplift/subsidence which is recorded but movement towards (or away from) the sensor.

I see, and is there any tool for counting subsidence in the way I want? And if so, in what step?

Thank you very much for answering, it is quite fascinating process but very complex. When I signed for this topic I had no idea of how difficult it would be

I don’t know any tool which automatically does this.

This is very complec subject. Not “Klick Klick” result. I have got tons of sutch results. :). For my point view there are no good tools to get better result in snap. This is good tool for one or two inteferogram genereation. But get useful result you need at least twenty intefereograms. so sooner or later You must turn to Linux based programs Because them are possibilites manage big stacks by programming result (not use gui).

All SNAP functionality is accessible from scripts. In my opinion the largest deficit in DINSAR-processing within SNAP at the moment is the lack of handling multiple master scenes (we are planning to fix this in the near future).

The Snap cmd funcionality is good, I have use it.I had 59 scens and “klick klick” way seemsed to be headache.

Is there any chance you still have these tutorials because the link doent’t work?

These are the two tutorials