Hello! I am getting an error at step 3 of snap2stamps “Coregistration and Interferogram computation”:

I have tried every suggestion I could find online to no avail. Any help would be greatly appreciated. Thanks!

Most of the problems with libjblas.so in SNAP involve mismatched gfortran runtime libraries, so may not be relevant here. SIGILL means the CPU doesn’t support an instruction in the dgemm_otcopy_OPTERON_SSE3 code. Are all those linux version running on the same hardware? What does cat /proc/cpuinfo | grep sse3 give?

Very old hardware (or a VM that doesn’t provide the full instruction set of the host) could explain the unsupported instruction. Wikipedia SSE3 lists older CPU’s with SSE3. I think “OPTERON_SSE3” refers to AMD’s partial implementation of SSE3, used so the code will run on both Intel and AMD processors.

Interesting, thank you. It did not occur to me that it could be CPU related. I have a custom AMD 5950x workstation running Proxmox which I then use to spin up VMs as needed. SNAP is installed on one of those VMs.

Here are the options I have on Proxmox for the CPU: 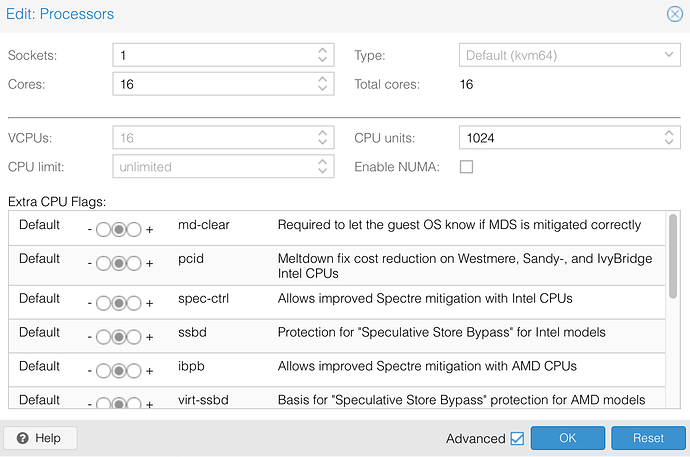 Reading more into this… the default “kvm64” CPU type in promox emulates a Pentium 4 look alike in order to simplify things. I will try a new VM with “host” CPU flags.

Thank you, @gnwiii, for pointing me in the right direction. I did get another error after fixing the problem with the CPU that i was able to solve by installing libgfortran5 on Ubuntu 18.04. Thanks again!

Having two issues (CPU and gfortran versions) at once is rare bad luck! Did this start last Friday (the 13th?).

I’m glad you were able to sort out the problem. For the benefit of the next unlucky user, please describe how you fixed the problem with the CPU (different computer, changes to VM settings, or something else).

Yep, some bad luck but I am grateful for this forum.

On Proxmox, when creating a new VM, under CPU type I chose “host” which allowed the OS to see the AMD 5950x I have. The downside of doing so is that might not be able to migrate the VM to another host if I wanted to but I do not intend to do that anytime soon.