All that looks fine.
As I’ve implemented the Terrain Flattening, correction for topographic effects have been removed.
However, the inherent variation of backscattering mechanism between the radar and target with incidence angle remains.
I’d like to investigate these effects and think about the impact that they’re having on my data.

So I thought I’d write out the “projected local incidence angle” option from the Terrain Correction function, assuming this would give me the variation in incidence angle across the scene.
But the values are not what I was expecting.

According to the metadata, the incidence near and incidence far are 30 to 45 degrees. But my local incidence angle data (and indeed all the other terrain output options from the TC module) are in the range 14-17 degrees.

I assume I’m misinterpreting something somewhere. Could someone tell my where I’m going wrong?

Hi there - of course, they can be very different. But this applies across the whole scene (including some mountainous areas), and some low lying regions at sea level. 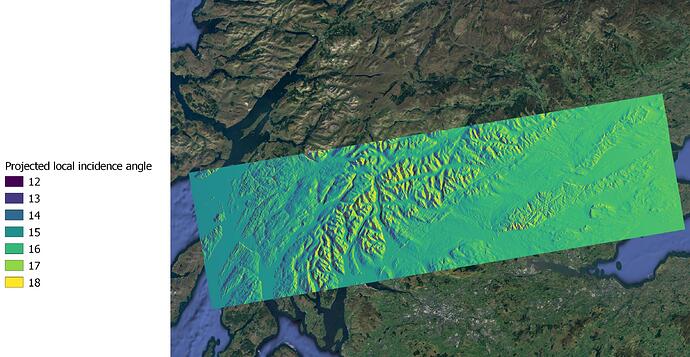 I was expecting angular variation from around 30 to 45 on the basis of the metadata in the file, but instead I have values from 12-18 or thereabouts. I get similar ranges of values when I export the incidence angle from ellipsoid as well. As you can see there is a general increase in angle across the scene (as expected) but just not the absolute numbers I expected.

two things come to my mind:

Re: The subset is still 190km from east to west. Apologies I did not put a scale on it.
I looked at the histogram of pixel values rather than relying min max values which can be misleading e.g. 0. The vast majority of the data is within the range of 12-18 degrees. I have chosen a scale to reflect that.