Misalignment during the creating stack layer

I try to stack three images (one coherence and two sigma0 images) but I notice a misalignment at one image.
I use SNAP ver 6.0.
Thanks

How did you stack them? What was the pre-processing?
Radar images need co-registration due to their acquisition geometry.

For each of the two images, I have done the processing steps. Precise Orbits - Callibrate -Deburst-Multilooking - Terrain Correction
After I create the Coherence Image. Finally, I want to stack the 3 images but I notice a misalignment between them.

are you using ALOS data?

Maybe screenshots of your misalignment would help.

Thanks for your response. I’m using Sentinel-1 data
I’m sending you a screenshotUploading…

you need to wait until the upload is finished before submitting your post.

I have sychronised the two images. See the white spot… (It’s a bridge)

have you tried making an RGB image out of these three? Maybe the mouse position is just not perfect.

I’m sending you the RGB image: R=cogerence G=mean B=difference.
See the river at the left side of the town. I believe there is a misalignment. 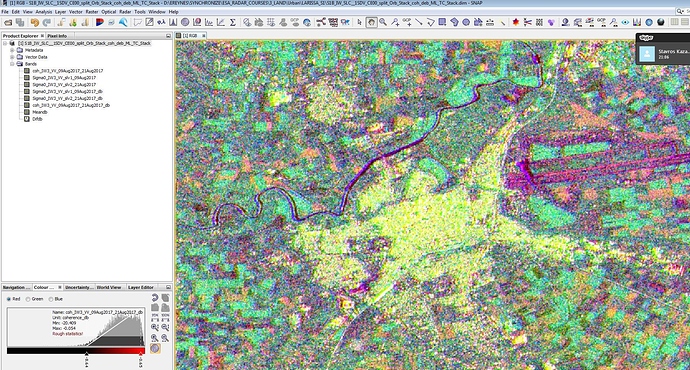