I seem unable to move polygons between vector containers.

It’s possible to do so, once the polygon has been created within one product, it’s possible to move it to the other product vector container, by right click on the class vector, and select geometry as sh.file,

other panel will pop up to save it,

Later one , activate the product you want to copy the same vector polygon sh.file by select it and from File import, Vector ESRIS sh.file, 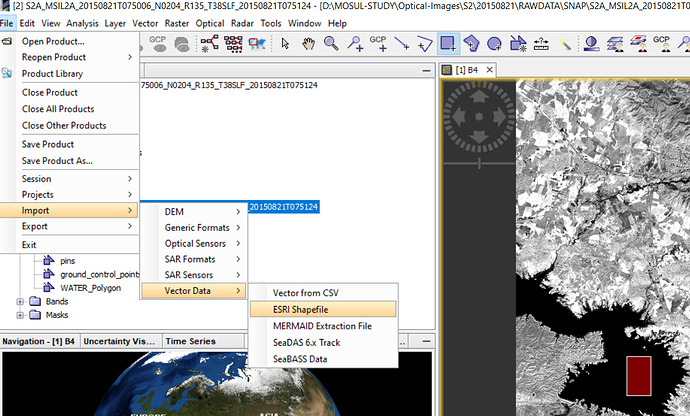 The same vector class will be appear within the new product, Move to a new vector container,

When I am satisfied that each sample (each polygon) is a good representation of my class I would like to combine the polygons into a single vector container.

Similar process could be done within one product,

Is that , what are you looking for?

@falahfakhri, thank you very much for your reply, I appreciate it.

Your suggestion does work, however I consider it to be a ‘workaround’, which may be the best we can do here. If I have, say, 50 samples (50 polygons) in total to represent my different classes, and each sample (polygon) is in its own vector container (for reasons I explain in my original post), it means I must individually export the vector container and import the shapefile into a new vector container 50 different times. That is a very cumbersome process when, in my view, moving geometries between vector containers should be as simple as selecting it and moving it with the mouse.

moving geometries between vector containers should be as simple as selecting it and moving it with the mouse.

I also hope this option could be done, but let’s ask the developer, might be @marpet , @mengdahl could helps in this point,

Indeed the handling of shapes and geometries is not as good as could be.
SNAP is still lacking some GIS functionality because of its origin from the raster data domain. If you want to combine multiple shapefiles I would suggest to use QGIS.
There, it should be easy to merge shapfiles.

Thank you for your reply, marpet. It’s helpful to have it confirmed that it’s not possible so I don’t spend any more time on it. Your suggestion to use a GIS program to merge the shapefiles is an excellent idea.