Can you give us an idea when a new version will be released? I’m specifically interested in the fix for the LUT issue discussed here. as many new scenes have this problem.

After I allowed the toolbox to apply an automatically downloaded update, the LUT fix got incorporated. However, it would still be great to have standalone archive with new releases to help in staging the toolbox onto compute nodes.

Maybe the following might make it easier for you to update a SNAP installation.
On the command line you can call:
Unix:

Currently we think about a restructuring of our installers. So maybe there will be an updated installer version soon.
A new major release (v3.0) is planned for February.

Thank you, this is an option.

To follow up, looks like VERSION.txt does not get updated when new modules are applied. Any chance this could be fixed? Alternatively, is there another file I can look at to find out the exact version?

So what is the version of your installation? You see it is not obvious. Additionally there can be updates of single modules which then might have the version 2.0.3.1.

What do you need the version for?

I’m saving the version as metadata on images ingested into Earth Engine. In case a bug is found later, we will know which images were processed with which version. I think I only need to know the versions of SNAP and S1TBX. Can I read them from somewhere?

In these files are elements which have the attributes last and specification_version.
By analysing this you can identify which is the last/current version.

Probably it is easier to look into the metadata of a processed image.
After processing the data a metadata element named “Processing_Graph” should exist.
This contains for each node the module name and version. 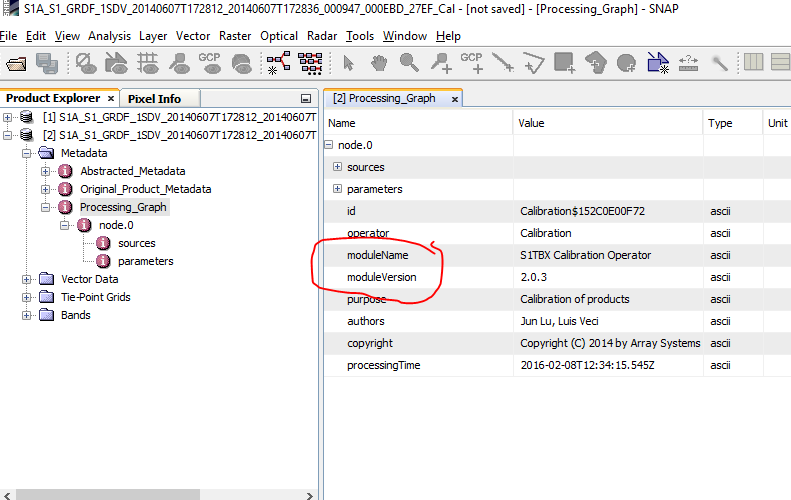 In GeoTiff files you should find a tag number 65000. This contains xml containing also the metadata. Actually it is the same content as it would be written to the *.dim file when using the BEAM-DIMAP format.
Somewhere inside the xml you’ll find

Inside this tag you’ll find the information above.
This information is also restored if you open the file in SNAP again.

Thank you, this exactly what I was looking for.