Since it have high intensity so object detection detects these noise (ghost?) objects. It degrades desired output.

Therefore, I would like to know what makes these objects and how to handle them, if possible.

Many thanks in advance.

+) Plus, it often appears in VH polarization. In the same product, VV polarization does not contain these ghost objects. 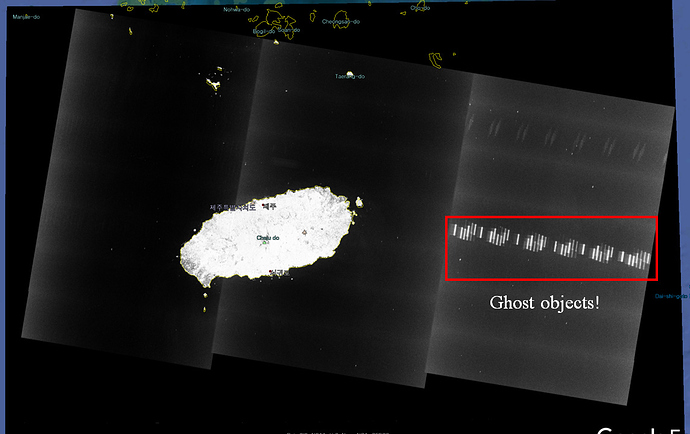 Hi, The ‘features’ you have labelled Ghost objects are due to radio frequency interference (RFI) from the ground. Although it can be removed in the processing from raw data (Level 0) to image data (Level 1), this is not performed by the Sentinel-1 Instrument Processing Facility (IPF). It cannot be removed from the processed Level 1 image such as the one you show. RFI can appear in any polarisation but can be more obvious in HV or VH imagery due to the lower radar cross-section of cross-polarisation imagery.

thank you for clarification. I wonder: If they are caused by something on the ground, why are they so regular and exactly perpendicular to the flight direction? Is the effect caused by a single object and then propagated in range direction?

Within each range line the increase in energy is not continuous but occurs at specific times/ranges. This gives the pattern in range. This pattern depends on the transmitter on the ground and so each RFI looks slightly different.

thanks, @peter.meadows, for the great explanation!