Hi @mauleon.fb you would want to look for areas of no change at all, like a mountain, for example. It’s best to choose an area that historically holds a trend of no change. You would know this by having a good historical understanding of your project area. Take a look at your interferogram and identify a few places that show no change. Then take a look at an aerial to see what’s there. Make the best decision based on your findings. Once you have picked a spot, you may want to have a historical look at the area to make sure it in fact has looked the same for a while to indicate that its a solid known zero. You can use Google Earth to view historic images, and also use any other data in the area that you may have, like survey data, ect. Once you are sure about your area, take an averaged sample of the area to get a good number to use for the subtraction to get absolute displacement.

@dsmilo thank you for your response. this provided me a good understanding of the process. Appreciate it big thanks!

that ascending and descending pass data produces different DInSAR results is little wonder as the displacement is described along the line of sight. So you basically look at deformations from two different angles and directions.
Please have a look at this topic as johngan explains it nicely:

Hello everyone, I am trying to estimate building subsidence for the area of Ho Chi Minh in Vietnam. I have used 6 interferograms (between June 2016 and June 2017) where I stacked them and produced the subsidence map. Firstly, I produced displacement in LOS geometry using the following equation. unwrapped (phase * wavelength) / (-4 * PI) (or 'phase to displacement' from SNAP where the results are the same). I also calculated the vertical displacement using the following equation: (unwrapped …

Combining an image pair of ascending and descending passes for one interferogram shouldn’t work, flight direction must be the same.

Completely agree with ABraun. It is common sense to use only one direction of the platform in estimating the vertical motion. My experience with tracing landslide in NE Bulgaria was to select ascending orbit, because (as far as I know) S-1 satellites are right looking sothe expected motion is towards the sea and not vice versa. As previously said it is essential to have some preliminary knowledge about the processes studied.

Download citation | Resolving three-dime... | One-dimensional measurement along the Line-Of-Sight (LOS) direction has greatly limited the capability of InSAR technique in the investigation of surface displacements and their dynamics. In recent years,...

Yes, I also completely agree with @ABraun. Both aquisitions need to have the same angle and path direction for both scenes to be statistically comparable and analyzed.

hai @dsmilo , according to your suggestion about zero point on project area i want to ask, if my interferogram is want to know the displacement of mount eruption, then what point i have to choose? bcs my project area is tropical country (covered by vegetation), instead my radar source is sentinel-1 which carried band C. thanks before!

Hi. I have a quastion, when i calculate vertical disp as you mentioned in your shot, after applying geometric terrain convertion, my disp map appear black and white!! What can go wrong during band math calculations, i dont know!!pls help me

Hi @zealandia_sarah, I am having a little trouble understanding your question. I think you are asking where to find your zero point in such a high vegetative site. In my opinion if you can’t find an area that has no change to help you create a benchmark for all your data, the amount of error will go up in your results. High vegetation can create a whole lot of decorrelation which can skew your results pixel by pixel. It would be hard to call your results reliable. Do a little more geographic research in your AOI and see if you can find a feasable zero benchmark. You can also use other data to help. Try to see if you can find survey data, well data, contour data from similar time periods to help orient your dataset. Are you trying to track the change in the ground under the canopy or is there a bare earth or near bare earth space that you are trying to detect change at?

You always want to apply the geometric terrain correction last. You want to apply vertical displacement calculation after you import you unwrapped image back into SNAP. Order of operations is really important here. Remember that when you orient your image using geometric terrain correction, you are changing the units from radians to meters. Your image is born in radians and all work done to your image in SNAP needs to stay in radians until you are done. If you terrain correct your image that changes your units to meters, then you apply a tool that works in radians, you will have some messed up results. Hope this makes more sense.

@zahra0729: Did you have a look at the histogram or the image statistics if the values are still ther? Maybe you just need to refine the colour manipulation.
Edit - solved here: Phase Unwrapping to Vertical Displacement

hai @dsmilo i’m sorry my question didnt complete. what i want to know is how to find a zero point for vert disp reference if my AOI is full of vegetation. if i use survey data from GPS (elevation) is that reliable? thankyou for your answer

vegetation is very bad for interferometry. Search for ares with high coherence to find suitable points.

It will be very hard to do that in an AOI full of vegetation. In my opinion, whatever results you do get probably won’t be very good to be honest. Remeber the concepts of how satellites collect data for interferometry. It all goes back to that. If the data isn’t collected well and correctly, then you are starting out with a bad dataset to begin with. Vegetation creates interference during data collection.

Hi, i have a quastion, i want to analayse ground deformation through a year for a region, so i have created displacment maps by generating interferogeram of all 12 month of year such as slave image and image of the first month such as master image,I mean in whole during of analysing,my master image was the first month image and the other images was slave.but now i,m confused if have i done it right or not!is it possible that I use from two images in different season!!!

Hi, I want to analayse ground deformation through a year for a region, so i have created displacment maps by generating interferogeram of all 12 month of year such as slave image and image of the first month such as master image,I mean in whole during of analysing,my master image was the first month image and the other images was slave.but now i,m confused if have i done it right or not!is it possible that I use from two images in different season!!! 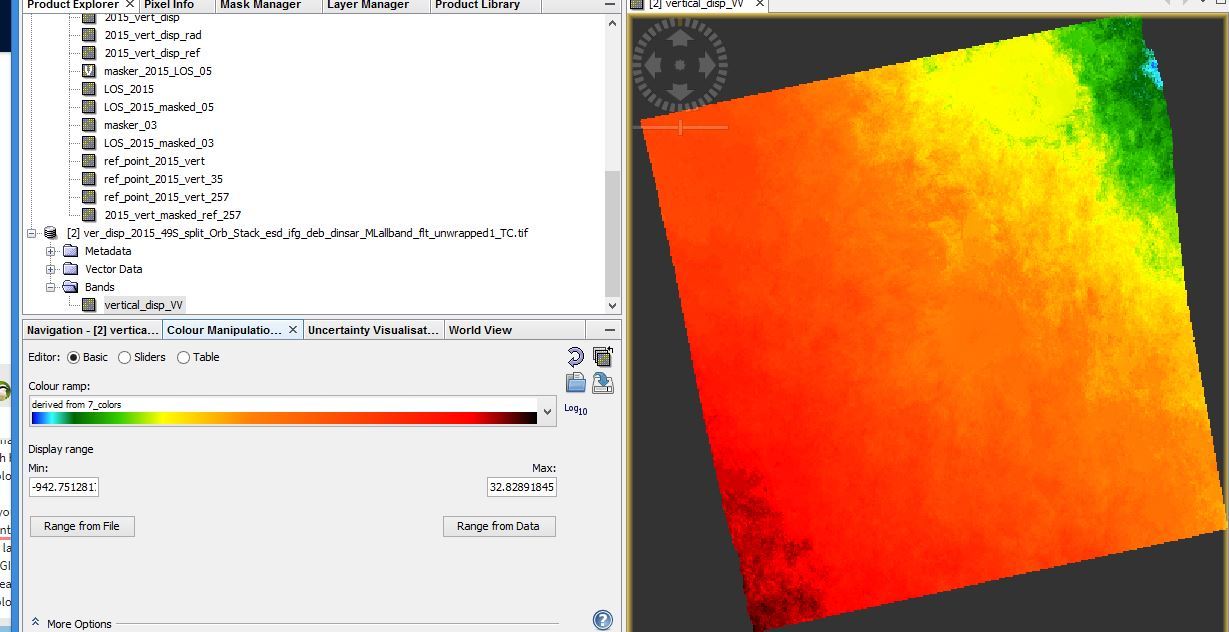 vert disp 2015 tc.JPG1229×632 92.5 KB
as you can see, the minimal value in blue (-924 cm) and the highest value in dark red- black (32 cm). when i tried to find point of refference, because my area of interest is in tropic area, which covered by vegetation, therefore i choose the land use (resindent area) for point of refference. so, the vertical displacement overlay with the land use shp in ArcGIS. what i want to ask is which point i have to choose, according to picture, resident area (yellow) is spreading, some of them in higher value, some of them in smaller value. thankyou 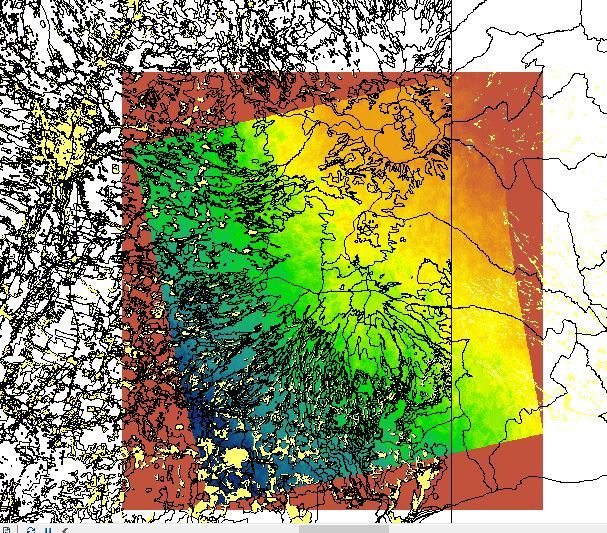 We cannot tell you which point is suitable als a reference, this is based on field experience and knowledge on the local conditions.
Again, look at the coherence, as I suggested above. The reference area should be a point with high coherence.