From there, I want to apply the Range-Doppler Terrain Correction so I can bring the result into ArcMap in the right place. When I look at this final result in ArcMap, it makes sense that the units would be in meters, but nothing tells me for sure. The result is in WGS84, which uses meters as the unit for pixel spacing, but I don’t know what my displacement units are in. Does anyone know the answer to this?

When you convert the unwrapping phase to displacement, you get the displacement in Line Of Sight (LOS).
In order to convert LOS to vertical displacement you can apply the following formula using band maths
vert_disp = (unwrapped phase * wavelenght) / (-4pi * cos(incidence angle) )

Hi @johngan, thank you for the explanation. I have had to manually convert with previous software programs before, and I was thinking that I would have to do the same with this software too.

In my mind, it doesn’t matter if the conversion happens before or after terrain correction. Can you confirm that that is true or not please?

Hi,
Usually, the map geocoding is performed at the end. This is the last step you do converting your image into WGS84 coordinate system and export it into Google earth. To me, calculate the vertical displacement first and then use terrain correction.

Bear in mind that you get relative displacement between the two acquisitions. If you want to get absolute displacement, you must find a point on your images that you think it has zero displacement. Then, you just subtract this value from the whole image

one last thing that i missed.
in the equation I gave you before, i missed the ‘rad’.
here is the correct one:
vert_disp = (unwrapped phase * wavelenght) / (-4pi * cos(rad(incidence angle) ))

I am using Sentinel-1A data right now. Do you just build that equation as is and all at once using band maths in SNAP? Can you give me an example of what this looks like?

you go to Raster->band math->edit expression.
below is my screenshot 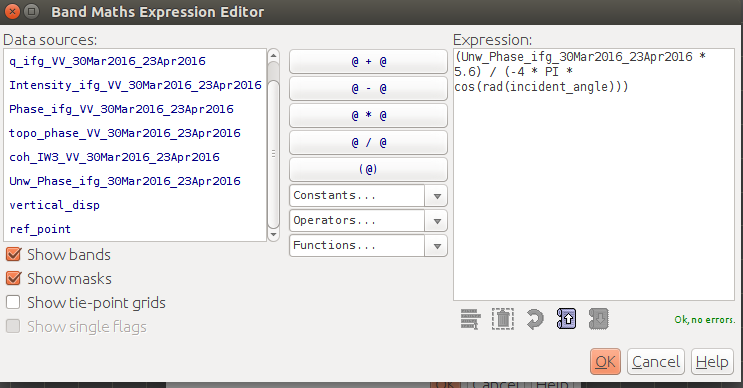 hmmm…so to me it looks like once you identify the unwrapped phase file, you don’t have to manually enter in the incident angle? However, you do have to enter in the wavelegth?

the unit of the wavelength in my case is in centimeters, hence, the final displacement map will be in cm

The screen shot you are showing doesn’t have a number for incident angle. How is the tool reading that number if you aren’t entering it in manually?

make sure the ‘show tie-point grids’ is ticked

Fantastic! Thanks! Any other hidden tricks I should know?

hmm, I do not know any other hidden tricks. That’s all you need

Are you just using the standard C-Band wavelength?

yeah, its just the wavelength of C-band

Is Phase to Displacement operator needed to be applied just after I applied this equation to unwrapped phase? Thanks

Instead. You either apply the equation yourself or the tool. Both do the same task but work slightly different. I don’t know the details however.

Hi. After unwrapping I also use that formula to convert to vertical displacement but snap tool doesn’t show any unis so i assume it should be in cm same as the wavelength. But like user sentinelgyb, should we perform Phase to displacement after applying this formula in the band math? or perform terrain correction right away? Thanks!