I would like to check the activities of my study area especially the faults which are near to the earthquake epicenter using the S1 images. Could anybody please guide me about how far from my study area around the faults I should consider investigating the activities? Or which parameters will be effective and important to determine this extent?

@EJFielding Could you please kindly share your valuable experiences in this issue?

The tectonic activity in many parts of Iran is quite complicated. Almost the whole country is deforming with distributed deformation, as we can see on the GPS velocity maps. I don’t know if there are many faults that move aseismically with creep between earthquakes in Iran. Other faults near the earthquake you are studying are not likely to show significant deformation unless they had their own substantial earthquakes. I would look first at the historical seismicity of the area to see which faults had significant earthquakes recorded.

If you still want to look for interseismic deformation related to a magnitude 6 earthquake, I would not look more than about 20-40 km away.

Thank you so much for your reply. You can see the historical seismicity of the area exported from the USGS as follows: 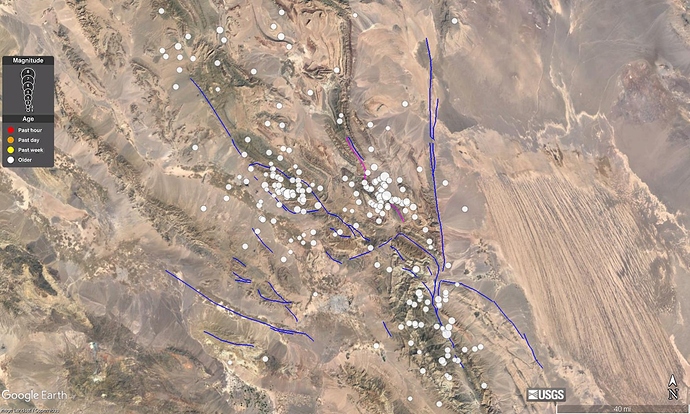 I see that there is no major earthquake happened in this area but I can check more evidence in the details to know the activities.

If you still want to look for interseismic deformation related to a magnitude 6 earthquake, I would not look more than about 20-40 km away.

Great. About 20-40 km away to the center of the local epicenter of an earthquake. Yes?

Do you believe and confirm that the high-rate land subsidence caused by water exploitation can motivate the tectonics activities in the areas such as Iran? I already asked the second question from Devin L. Galloway, a research hydrologist from USGS, and he sent me this answer and the attached file:

“I do believe the state of stress on faults is related to fluid pressure. There are many studies that show increased fluid pressure, such as occurs when deep faulted groundwater systems are artificially recharged (e.g. by direct good injection of fluid), can cause fault movement. Theoretically, this is attributed to decreased effective stress in the faults related to increased fluid pressure. By this theory, generally, the opposite is true for decreased fluid pressure – the faults would tend to become more locked owing to increased effective stress. However, with that said, differential fluid pressures in groundwater systems separated by faults may have different behaviors owing to high fluid pressure gradients (and thereby altered stress fields) across the faults. In these systems, large decreases of fluid pressure on one side of the fault could give rise to the increased opening of the fault and promote motion on the fault. If you add subsidence (aquifer-system compaction) to the mix, the differential compaction of the aquifer system across the fault can also promote fault opening. Not only motion along the faults are of concern, but also the generation of earth fissures in the aquifer system itself is of concern. I know earth fissuring occurs in some basins in Iran, apparently related to groundwater depletion and land subsidence. A recent paper presents some of the general factors related to the generation of earth fissures in aquifer systems (attached).”