Problems when running back geocoding/ESD on S1 SLC data

The relative orbit number is the same for both acquisitions, as well as slice number.

If this is your case,

The relative orbit number is the same for both acquisitions, as well as slice number.

Your study area should be located in the same bursts, not as you mentioned,

For example I selected now IW3 burst 7-12 for one acquisition and burst 3-10 IW3 for the other acquisition. Is snap so “smart” to only

But how can they be in the same bursts, if the number of bursts is not the same for both scenes? And in snap, I so far only found the way of visually doing the selection fo bursts in snap in the TOPSAR-Split step. So

Would you please to share the image name, orbit number, slice number, and the place of the study area, in this case I could give try.

So this is the problem, the two images frame don’t much each other, that’s why you found the difference between the bursts number cover the same area,

Please take a look carefully to the meaning of this thread I mentioned above to you,

For instance I found these pairs for you, check the slice number of both, cycle number and the orbit,

I’m attempting to make a Land Subsidence map for my dissertation, I’m relatively new to remote sensing and working with snap and just come upon a error.

When processing my graph it came up with an error stating: 0, I then attempted to follow each of the steps manually but when I came onto ESD the error came up again. 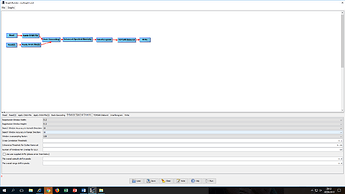 Does anyone know how to solve this error or experienced a problem like this before?

Does anyone know how to solve this error or experienced a problem like this before?

you can also use the “S1 TOPS Coregistration with ESD” module to prepare the two-product-stack.

Besides that, a one year temporal baseline is quite large…

I have started the processing again yesterday using my original pair, but with the simplified graph and only my selected bursts for one swath. that ESD error so far didn’t show up again. Still I am amazed, that since 24h processing time, it is only at 30% and the processing server has 16 cores and 40GB RAM.

I will have a look at the links you provided. This sentinel data processing seems much more complicated than TSX or PALSAR data which I have been processing in the past.

did you reduce the number of bursts in the Split operator? It is shown here: The Order of DEM Creating Steps

Again, for image pairs, I recommend the TOPS Coregistration with ESD

I will have a look at the links you provided. This sentinel data processing seems much more complicated than TSX or PALSAR data which I have been processing in the past.

TSX and ALOS PALSAR are acquired in StripMap mode while Sentinel-1 is acquired in TOPS mode. This brings new challenges regarding the processing of swaths and bursts.

If your reply was directed to me: yes, I selected only bursts 7-12 for one acquisition and burst 3-10 for the other, only subswath IW3.
And mu intention was to do the Coregistration with the ESD, but as I mentioned in my initial post, the ESD failed, returning zero match. Which was possibly due to non overlapping bursts that were selected. However, from Falah’s recommendation of simplifying my graph and doing the burst selection, ESD step now seems to work. But still veeeery slow.

From InSAR processing of other datasets I am used to being able to highly automate the processing chain with scripting, but with the sentinel and snaps I am quite lost still

This is sort of just a try with one image, or now even just a tiny portion of this image. But how can one even process a timeseries with intention of PS analysis for example? I imagine this taking ages if one doesnt have access to some supercomputing center …?

Again, for image pairs, I recommend the TOPS Coregistration with ESD

However backgeocoding and ESD , works fine fore me, for image pairs, the above graph is used to process many pairs,

I’d like to draw your attention, to the post I explained the selection of matched pairs , Also it is quite clear explained by @ABraun but still you insist to process unmatched pair,
Concerning the orbit as it is mentioned in access hub the number ranged between 1-175,

Concerning your demand of PSI, this topic heavily discussed in SNAP to stamps,

Try up to process the pair , I supposed to you, and you’ll find out the difference,

And I am not insisting on processing wrong pairs. But since the bursts of my intial selected dataset that does have the same relative orbit, but not cycle number, as you pointed out and in the current processing the ESD step did not fail, I am letting it run now, to see what it turns out to be.

For the question I am trying to answer with my InSAR processing, the time span of the image is also relevant. THat is why your provided pair is not suited for my purpose. I am trying to see if there is another pair that matches all criteria

But how can one even process a timeseries with intention of PS analysis for example? I imagine this taking ages if one doesnt have access to some supercomputing center …?

@mdelgado developed a python script for these tasks: Snap2stamps package: a free tool to automate the SNAP-StaMPS Workflow
If you want to automate your preprocessing (generating stacks and interferograms), this is the tool of your choice.

Otherwise, why wouldn’t one be able to search for a matching cycle number if this is required?

I listed some recommendations on the search for images here: Same sub-swath is expected
The question about relative orbit and absolute orbit is also answered there.

Also I explained in here

Also please have a look at this tutorial, it explains in details the parameters of searching S1 data,

Sorry, if I still don’t understand correctly: But does this mean that if path=track=relative orbit # is the same for two scenes they are suited for interferometry for sentinel1 (as would be the case for other datasets)? Because as mentioned earlier, this is the case for my initial dataset , where just cycle # differs.
Thanks so much by the way for clarifying these simple steps so patiently!

Thanks for the link. I have taken webinars from RUS before, very nicely explained. My graph steps are the same as explained in the tutorial link you posted.

If you want to automate your preprocessing (generating stacks and interferograms), this is the tool of your choice.

thank you for pointing me to this! My worries were also regarding processing times actually. If one small subset already takes several days …