Python interpolation does not pass through all data points

it is my first time using python. I usually use Fortran or C++ and or Mathematica to do plotting and such.

I wanted to interpolate a set of data, linearly. Just the simple method. But it does not work correctly, the interpolation ignores some of the data set.

Here is what the plot shows. Points are the data, green line is the connected data by matplotlib, while the red line is the interpolated data using scipy: 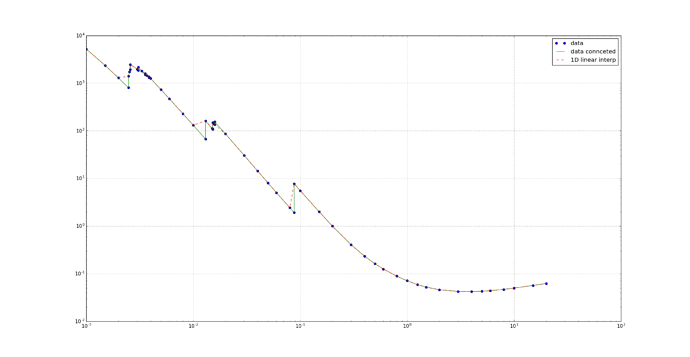 One expects the green and the red to coincide, but they don’t!

Note: I tried first scipy.interpolate then I tried np.interp. Both gave me identical behavior.

I think your question better fits in a general python forum (e.g. the one on stackoverflow) since it concerns basic python (or scipy/numpy) behaviour, not the sentinel toolbox.

As for the reason of interp1d’s behaviour, I’d speculate that your data is not continuous. It seems to have “jump points”, where there is two different y for identical x. In that case, it is ambiguous which y should correspond to this x, hence any interpolation function has a hard time to decide what to do (and to decide for the right thing, because it is not clear what “the right thing” is. it depends on the user.).
you could try with keyword assume_sorted=True, but no idea whether that helps. better would be to clean up (pre-process) your data, such that it is continuous.