Resetting the logic in the Graph Builder

I love the Graph Builder, but often I’ll find that some sections of a graph will complain about incorrect source bands, particularly when a saved graph is loaded and changes are made. For example, the graph below shows an error for the Change Detection box because the original Graph was made using the IW2 subswath but now I’ve changed the TOPSAR Split to operate on IW1. 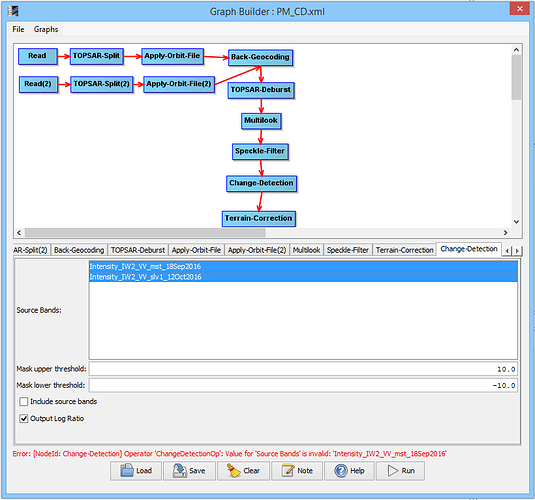 Is there some way to get the Graph Builder to re-parse the logic of the graph from the start? I’ve tried deleting modules and changing their sources, but no luck.

Check that the saved graph xml doesn’t have a specific band name saved with it.

I experienced similar things. The errors are caused when changing an existing graph. You can correct them by opening the xml file with a text editor and search for the .1

I investigted this some more: The problem re-occurs every time you insert a new module into an existing graph and place it between two connected modules, and remove the old link respectively. This somehow adds the .1 in the source product tag in the XML file which makes the graph incomplete.

Thank you, Luis and Andreas, for your continuing wonderful and excellent support.

Perhaps this might be a good idea for an improvement - the ability to reuse graphs is great, but the necessity to edit them outside of SNAP is a little wonky. Re-parsing the logic of the graph doesn’t seem to be a really hard thing to do, but users always say that