Apologies - i know this isnt toolboax related, but does anyone know what the colours mean in the images on ESA Datahub? For example - what is the large red cloud representing the water? What does the change in intensity represent? What processing has been applied to get this data?

Is it related to sea state? 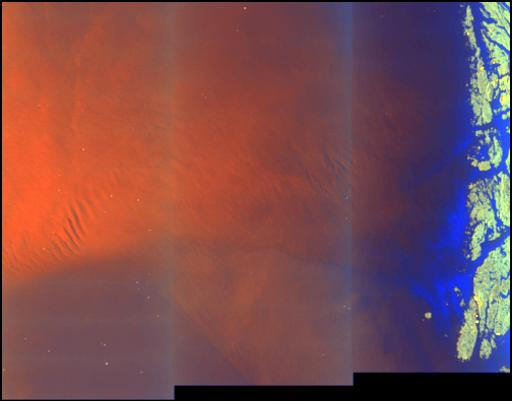 I don’t know what combination of polarization bands are used to generate the quicklook.
The large gradient across the image is due to the incidence angle and the whiter parts between subswaths is the thermal noise.
Over land, these can be reduced using the noise removal and calibration operators. However, over ocean, closer to the noise floor, it may not help.

Thanks - the change in incidence angle did not occur to me.

More info on how the quicklooks are generated:

The appearance of the quicklooks has changed markedly with IPF updates. I don’t know whether the info above has kept pace with those updates

makes sense - thanks for the link.

I wonder if there is a colour that you might expect to be predominant if the sea was rough? It would help when looking for slicks - slicks are almost invisible between 0-3m/s wind speed and >7 -10m/s. Without incorporating/finding additional data on sea state from other sources i wonder is there a sub-optimal way of avoiding bad weather from the quick look alone?

The web information will be updated.

Well that sounds exactly like what i am looking for - avoid the red water images if possible. Thanks everyone for the info.