I had installed the SNAP(old version) and then Sen2Cor(old version). i had have Python2.7 already installed in my pc (win10/64-bit), and in the beginning i had some problems to fix the path. Finally, i uninstalled my old Python2.7 and installed the Anaconda2-4.2.0 and i fixed the problem. Later, i tried to do an atm. correction and it worked.

Unfortunately, some days later, I tried again to applied the atm. correction, but it didn’t work. I realized that there were a new version of Sen2Cor-2.3.0 and also SNAP-5.0. However, I wanted to work with one the image that already had the atm. correction, and i started having problem with the masks.

So, at that moment i didn’t know what to do. and i chose to uninstall everything! and installed the new versions.
I didn’t have any problem in the second installation. Then I checked with the command line if everything was fine, without any problems or errors.
BUT, when I installed the sen2cor in the snap (tools-plugins-available plugins) and later reopen snap…I think that i have an error somewhere! because the Sen2Cor doesn’t work. i tried to edited in the external tools but Sen2Cor doesn’t appear! Now I’m confused.

I had read some topics in the forum and checked if i have errors in the installation or somewhere else. but I didn’t find a similar problem.
Could any one please tell me the error or what is I am missing? 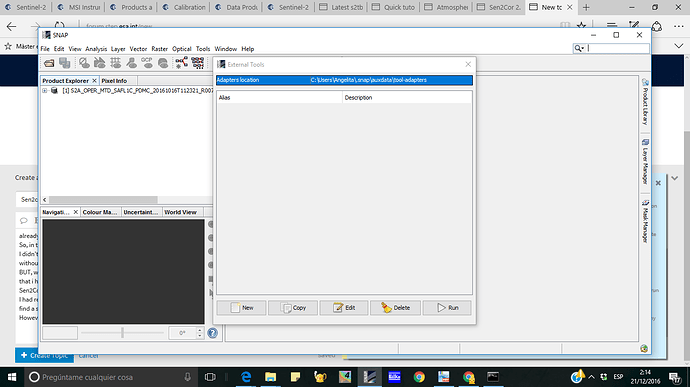 Hi
I have the same problem, but now it’s solved, you have to uninstall Sen2cor and reinstall it in SNAP >> Tools >> Plugins

Hi! thanks for the answer! I tried but it not worked for me…
I also have read in the forum that depends if you have more than 8 GB of Memory RAM…but I did the installation in other pc (Win10/64bit/12GB RAM) and I still continue with the problem…

Do you have another idea!?
Cheers!

Regarding the tool within SNAP. Probably it helps if you remove the 'java' entry from snap.clusters file. This file is located in <installation_dir>\etc. This file is normally not editable. You have to give your self write permission before you edit it. Maybe you need to uninstall the plugin and reinstall it afterwards. A general fix is on the way.