It is unclear to me how you use sen2cor in Snap 6 beta. Is it now fully integrated or do you need to use standalone installer?

Please could someone explain in some detail how I can install/activate sen2cor in Snap 6 beta?

did you see this?

SNAP 6 will come with a Sen2Cor stand-alone plugin; when you launch the Sen2Cor via SNAP for the first time, it will ask you if you want to download the plugin. If it's already downloaded you will be able to tell SNAP it's location. SNAP 5 works with classic Sen2Cor. Launching stand-alone Sen2Cor with SNAP 5 would requires to change the SNAP adapter (change the executable path, the command line...).

Yes, thanks ABraun. Unfortunately that is not currently the case with Snap 6 Beta.

ABraun, I understand you have successfully used the recent standalone sen2cor via the command prompt.

In addition, do you know if this process incorporates topographic correction? If so, do you know how I would specify the use of a specific DEM raster?

Many thanks indeed,
Lawrence

please have a look at this post: Specify system variable PYTHON_BIN for Sen2Cor

regarding the DEM: Please see the manual at chapter 2.2.7: http://step.esa.int/thirdparties/sen2cor/2.4.0/Sen2Cor_240_Documenation_PDF/S2-PDGS-MPC-L2A-SUM-V2.4.0.pdf
A 90m SRTM is automatically downloaded if available. Currently, no external DEM can be used.

So are you advising me to use the old python-dependent installation process and integrate with Snap, rather than the new Sen2Cor standalone via the command prompt? I understand you cannot integrate the standalone sen2cor with Snap 5 or 6.

I haven’t tested sen2cor in SNAP 6 so far but the python version (2.3) worked fine for me in SNAP 5. Also the standalone installer of sen2cor 2.4 outside SNAP using the command line.

in the 6 beta version the update center is not still working so it is not possible to install the sen2cor plugin directly from it.
With the version 6 official release, the sen2cor plugin will be available to be able to install and execute sen2cor directly from SNAP. Meanwhile, it is possible to build the sen2cor tool adapter from the source code https://github.com/senbox-org/s2tbx/tree/master/s2tbx-sta-adapters/sen2cor and install it using the plugin manager.

Please could you post on here the code required to run the standalone sen2cor 2.4.0?

yes, optionally including the resolution.

Please see the manual at chapter 3.3.1 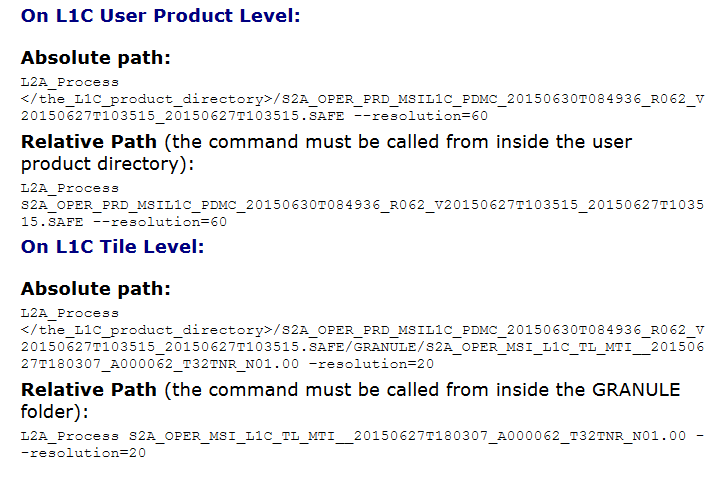 It worked!! I swear I tried this many times yesterday with no success…very strange.

Hi, I also had problems with Sen2cor, but I solved by extracting the Sen2Cor-2.4.0-win64 installer in my user folder; I copied the .SAFE file to a folder always in the user directory called AtmCorr
To run the L2A_Process.bat command, enter with the prompt in the path where I saved the C: \ Users \ Asus \ Sen2Cor-2.4.0-win64 folder and launch: "L2A_Process.bat C: \ Users \ Asus \ atmCorr \ S2A_ … SAFE
I hope I was clear in the description.
Is there a tutorial to integrate Sen2Cor into Snap 6 preview?