Continuing the discussion from Installing sen2cor:

Hi,
I have update the sen2cor to latest version(sen2cor-2.0.6) on windows 7 64-bit.
When i run L2A_process --help I receive the following warnings 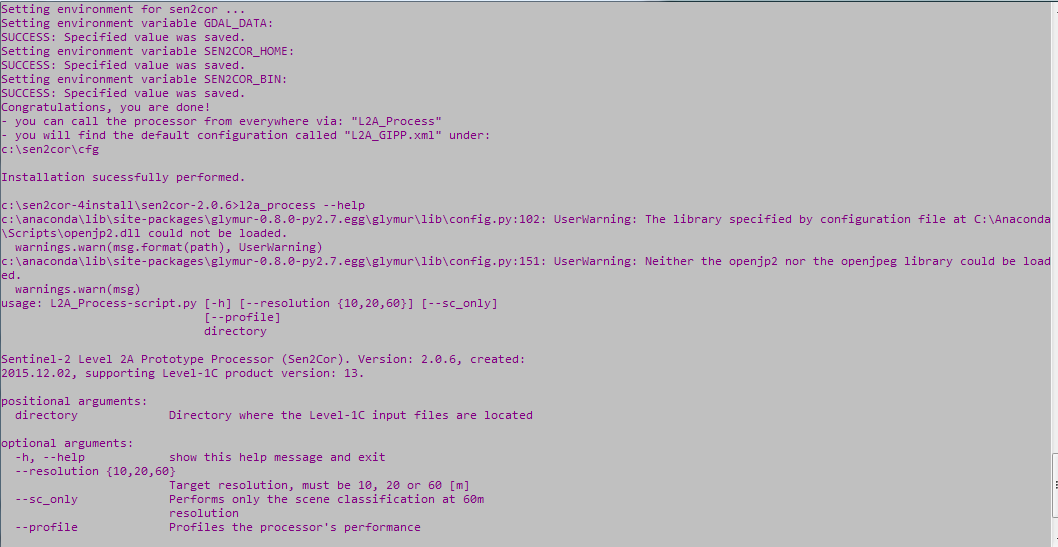 Can anyone help me with this issue?. Thank you in advance.

Hi,
I also installed the new sen2cor version on windows 7 (64 bit) and receive the same warnings and can’t execute the processor.

heres what worked for me:
I replaced \Anaconda\Scripts\openjp2.dll with the openjp2.dll from the previous 2.0.4 sen2cor realease in the software archive, see:http://s2tbx.telespazio-vega.de/sen2cor/archive/sen2cor-2.0.4/

Download the zip-archive and unpack it.
Go to the directory sen2cor-2.0.4\sen2cor\build\lib.win-amd64-2.7 which contains an openjp2.dll.
Replace the original openjp2.dll in your Anaconda Installation ( \Anaconda\Scripts\) with this one.

I am not sure, if this is the correct way to solve the problem!
At least the error warning is gone when i run L2A_Process.
Would be great to get some feedback on this workaround.

Thank you Christian.
It pass the check part but there are other errors now. 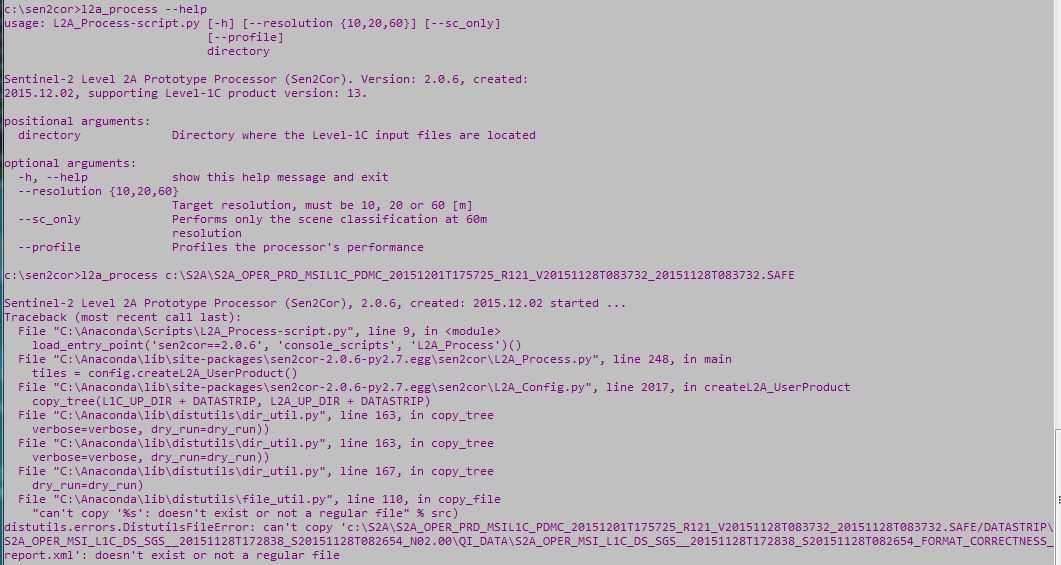 this error has already been discussed: SEN2COR tool
Basically u have to shorten the path to the L1C root folder, working on Windows OS, because there is path length limitation.

Thank you.
It works.

I have also a similar problem with Sen2Cor. I installed Anaconda (2.7), SNAP and Sen2Cor (2.0.6) as described in the manual but I still get this error: 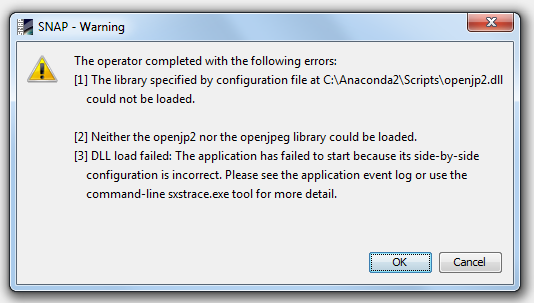 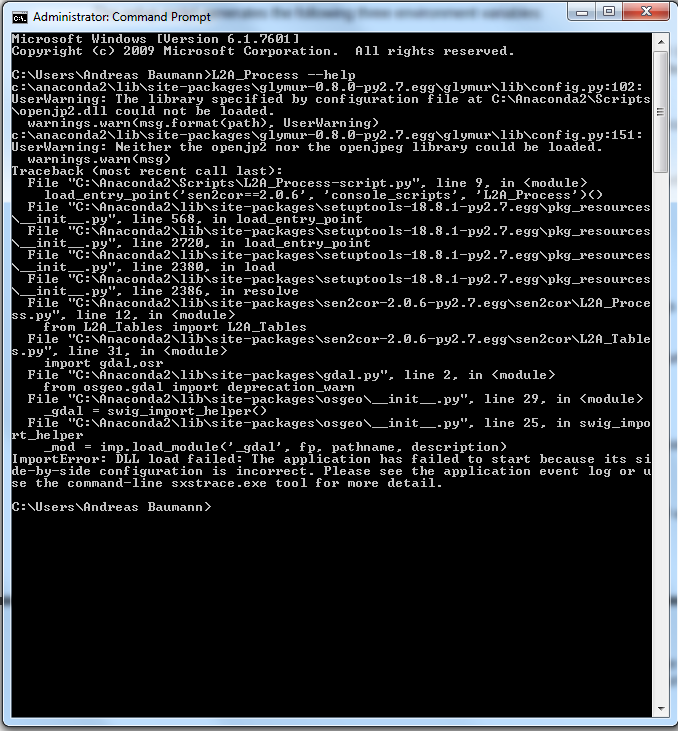 If I replace the openjp2.dll as described above I get an other error: 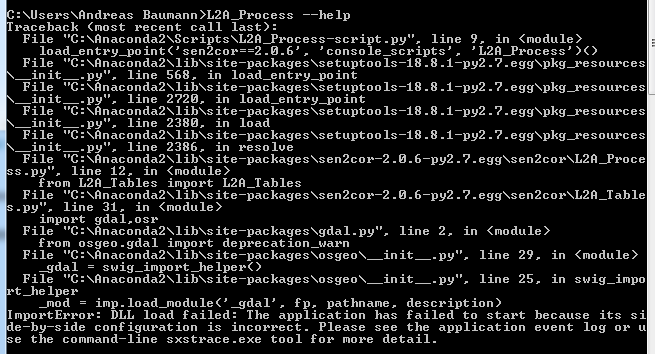 Is there any solution for it?

Thanks Chris , same problem solved using oldopenjp2.dll
but now I seem to have a failed deletion of cache dir… 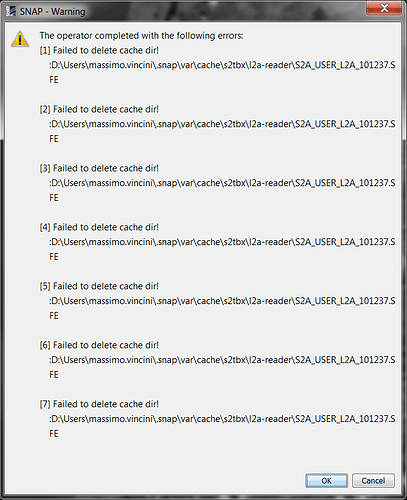 No I was not able to solve it. But I was able to install it on my private laptop without any problem. I am still hoping for a new update which will work.

Good to heard it works well on your laptop. My laptop is 32-bit windows system so it seems that it will not work on my laptop as well. It is a pity… So I am also waiting for an updated version of the software.

Hello,
i had the same problem on windows 7 but when I updated windows 7 to windows 10 problem disappeared. Only problem ( i made a separately topic about it but no answer ) is pixels with no data value after atmospheric correction 10m. ;]

I’ve encountered the same problem when installing sen2cor on a Win7 64bit machine. I previously had it running under nearly identical circumstances on my laptop, but now that I’ve installed it on my desktop PC I’m getting the error message posted above by @abgbaumann.

Are there any solutions or the like for this problem yet?

Ok, problem resolved. In case anyone with the same problem might be interested: I deleted everything again (including SNAP) and then started with installing Anaconda 2.5.0. Afterwards I downloaded, extracted and installed sen2cor-2.0.6 and now it works like a charm.

So I figured deleting SNAP did the trick for me, as I’ve already tried removing Anaconda and sen2cor multiple times.