Hello,
I have problem with the accuracy of the ellipsoid correction of Sentinel 1 GRD product.
When i import shapefile to the S1 product, geolocation seems to be perfec. 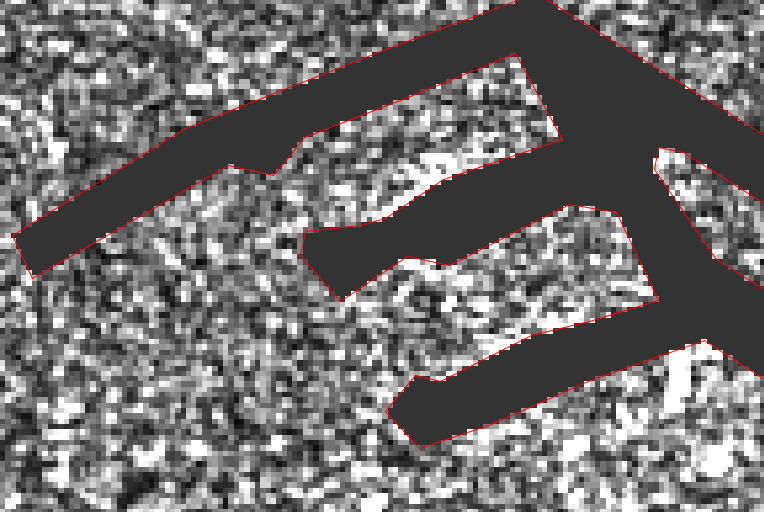 However, after correction vector and raster do not match well. 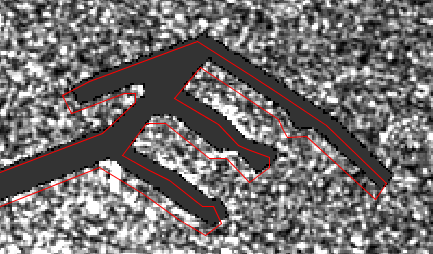 How to improve results of ellipsoid correction

if you working over land, please use the Range Doppler Terrain Correction.

In any case, I suggest to import the shapefile after ellipsoid/terrain correction for best accuracy.

Im working over sea (coastal zone) thus I used ellipsoid correction. I tried also Range Doppler Terrain Correction and results are similar (at the image left is EC, right RDTC). The error is less but there is still displacement between vector and raster. The shoreline is shifted in comparison to the Sentinel-2 data and objects at the sea (ships, oil platforms, etc.) seems to be shifted as well. Results of Ship detection algorithm (vector of points from SNAP function) does not match the position of object at raster if the ship is small.
The effect is the same whether the vector is imported into the product before correction or I import it after correction.
I can improve results doing georeference in ArcGIS (simple shifting and resizing) but how to do it in SNAP?

The distance between ellipsoid and geoid at that location could be the issue? The mean sea surface follows the geoid and not the reference ellipsoid.

It could be the reason, thanks. But how to improve results in SNAP? By changing DATUM parameters for projection? Or is there any simple method to shift and rescale raster using coastline as a reference? I tried to make regular projection (raster > projection) but its not possible for radar data in SNAP.

the projection of the radar data should not make a difference actually.
Have you tried Radar > Geometric > Ellipsoid Correction > Geolocation Grid?

Yes, exactly this function. When I use oryginal product with no correction, imported vector (shoreline extracted from Sentinel 2 in UTM34N projection) fits very well to the radar image. Thus geolocation of pixels seems to be ok. I used this vestor to mask out the land. After correction with projection to UTM34N I expected the same image and vector compatibility. So what is the reason of the displacement? Bag in SNAP? I use ver.7.0 with windows 10 / windows 7 (the same results).

what is the projection of the shapefile?
Have you compared the results with the raster projected to WGS84 instead of UTM?

shapefile is in UTM. I tried lat/long as well. It is not the problem of vector projection because when I compare images SAR and MSI without vector displacement is evident. SAR image is shifted relative to MSI.

have you applied orbit files to the SAR data in a first step?

I’m out of ideas. Can you please share the product ID?

I’ll give it a try myself, thank you
What vector data were you using?

You can find data in: https://zofcloud.ocean.ug.edu.pl/index.php/s/NmaHwOmGoqiNIIn
vector is in shapefile folder

Here are my steps of analysis:

Thanks a lot for your effort

I cannot reproduce the shift

When I import the shapefile before terrain correction, it lies correctly 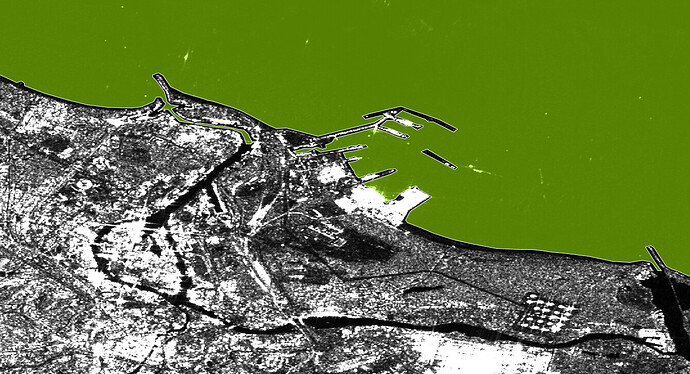 When I first apply Ocean Object detection based on the vector mask, the data is also well aligned 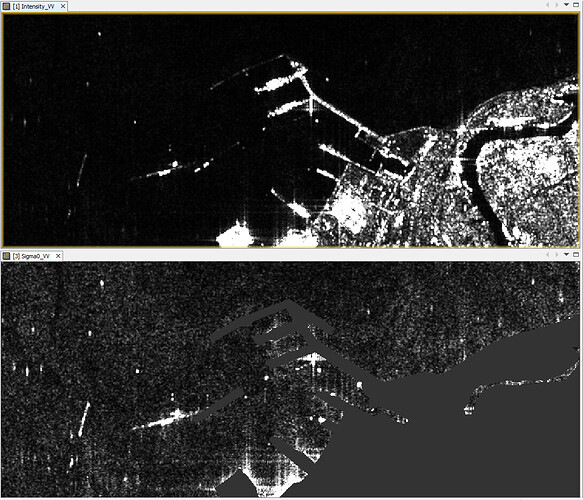 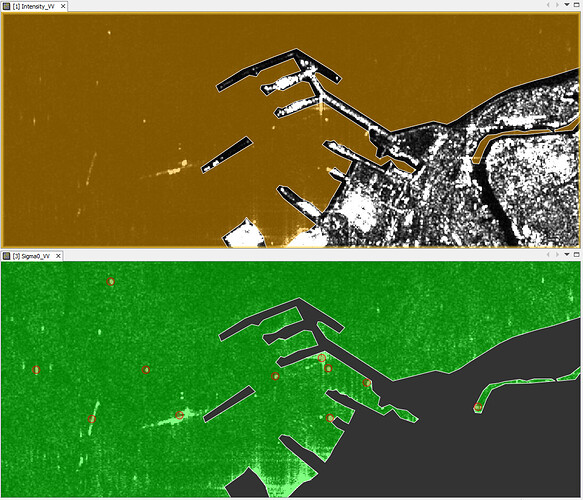 Of course, the order is not entirely the same as yours, but basically the problem should not happen.
Did you stick to the BEAM DIMAP format for the intermediate products?

I used Range Doppler Terrain Correction with SRTM 1Sec and unchecked “exclude areas without elevation” and when I then import the vector, it aligns with the mask of the Ocean Object Detection.

I tried the same with Range Doppler Terrain Correction, result was better but there were still displacement. I put the result earlier in my post.

I repeated analysin on 3 different computers and each time the problem exists. Which version of SNAP do you use?

My previous Range Doppler Terrain Correction was made wit SRTM 3Sec. My mistake. Using SRTM 1Sec I finally get results as yours.
After Range Doppler Terrain Correction mask and line are not ideally aligned but I understand that masking was before correction thus it is ok. There is still problem that points from ship detection are often outside of objects but the reason is the same. They are created before correction. 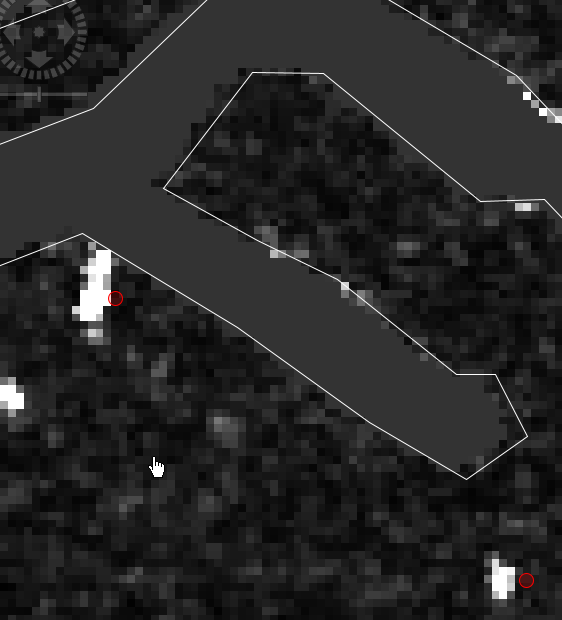 But could you tell me if you also get the shift in the case of ellipsoid correction? I would like to understand how it should work.
Thanks for your help.

I can confirm that Agerage Height Range Doppler results in shifts between the processed data and the shapefile which is imported afterwards. So probably it is just the geometric displacements caused by the incidence angle and the topographic variations which are better resolved with RD Terrain Correction. 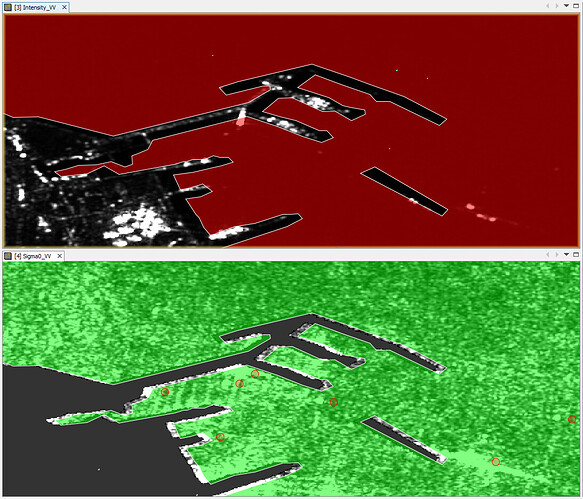