Apologies in advance for the question not being directly SNAP or S1tbx related. I need to filter some filenames before parsing the files into SNAP.

I came across a little formula (https://scihub.copernicus.eu/news/News00014) to calculate the relative orbit number from a Sentinel-1 product names absolute orbit number:

I would rather do this calculation on the filename rather then read from metadata files if possible. Does anyone now if there is a formula that works for Sentinel-1B?

Many thanks in advance

Hi, The equation Relative Orbit Number = mod (Absolute Orbit Number orbit - 73, 175) + 1 is only applicable to S1-A. The corresponding equation for S1-B is

Thank you Peter, works perfectly.
Would you mind linking your source if you have one?

haha ok that works for me!

Sorry wasn’t questioning authenticity was just curious if I poorly googled and/or if it is publicly documented!

Thank you for that formula, Peter. Do you know where I might download a map or image identifying the Sentinel-1 relative orbits? I’ve scoured the internet but have come up empty-handed.

Hi, I am not aware of a map as such. However you can determine the relative orbit of planned acquisitions such as shown in the image below. The Google Earth planning files can be found at https://sentinel.esa.int/web/sentinel/missions/sentinel-1/observation-scenario/acquisition-segments. Clicking on a given acquisition will give the details window including the relative orbit. 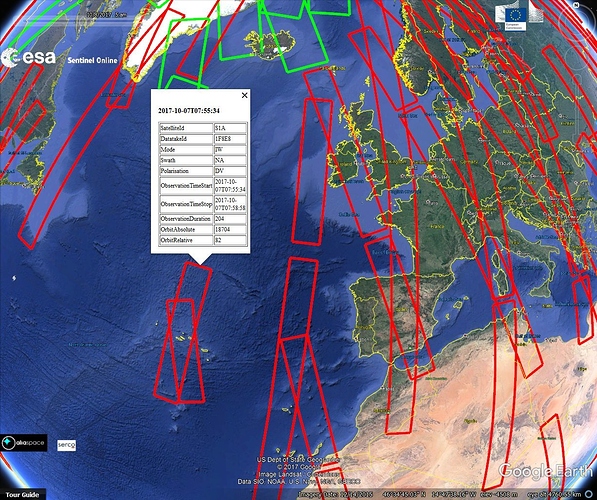 Thank you, Peter. I’ll look into assembling a map from the planning files.

This is also a non-snap related question but I’m not sure where else to look. I am interested in understanding the relative orbit number a bit better. To try to control incidence angle in my analysis as much as possible I’m starting with an analysis only looking at images from the same relative orbit number. Oddly, this results in a 6 month gap of images in late 2015 (S1A only, clearly) and another gap in early 2017. Is there a reason why images from a particular relative orbit would be missing for large chunks of time over a given area? Is there a better parameter to use to filter for coincident or mostly coincident images over time?
Best
Corinne

Hi Peter I used your formula to calculate the relative orbit of this file ‘S1A_IW_GRDH_1SSV_20141004T122919_20141004T122948_002680_002FD9_13B4’. The value I get is a different (158) from what it is supposed to be (160). I am thinking may be the reason behind this could be that this product belongs to the earliest acquisition period and after that there may be an orbit adjustment. Could you please confirm me whether this formula holds good for the whole time or I may need to use different variables to calculate the relative orbit for the products acquired in the early periods.

Hi, The final orbit for S1-A was only acheived a few month after launch. Before that time the satellite was not in an exact repeat period of 175 orbits every 12 days and so the equation to calculate relative orbit from the orbit number does not hold. I’ve used a start date of 1st November 2014 for calculating the relative orbit number.
Peter

Thank you for your reply.

Hi Peter,
I have a question related to using pconvert tool. I use pconvert to create rgb images. The tool offers options to control the size of the output image. I couldn’t clearly understand what these options do and I would like to use this tool to create an rgb image with a specific pixel size. Is this possible?

Thanks and regards,
Dinesh

I’m not familar with the pconvert tool. I’m guessing that if you can output an image of a specified size in pixels, you should be able to calculate the output pixel size.

Can you please tell the equations to calculate relative orbit numbers from absolute orbits for Sentinel 3A and 3B? I will appreciate.

I’m not familiar with the orbit of Sentinel-3 - I suggest you post your question to the S-3 part of this forum.

I wonder why the orbit pass property is not considered in the equation. Does it mean that the equation can be applied to images from both of ascending and descending orbits?

It seems obviuous to you what mod() is. To me it is not really clear. Could you clarify on how to calculate the given equation?
Thank you!

Hi, mod() is the modulo function as described at https://en.wikipedia.org/wiki/Modulo_operation. For S1-B, the expression is given above is