I have a source image (S1) in WGS 84 UTM 24 N projection. The source image is used for a segmentation analysis. The k-means segmentation process is used to segment the source image(S1) and output a new image(N1). The new segmented image (N1) however does not have any projection associated with it and the band is labeled as class_indices.

When I export directly from File>Export>Geotiff - it works but does not associate any spatial information with it.

When I export the view as a geotiff, by right click and choosing full resolution it throws an error - ‘Cannot export’, no details on it.

Is there a way to export the result of k-means segmentation as a geotiff file which has projection data associated with it?

did you create N1 with the band maths? If so, did you uncheck “create virtual raster” and save your product?

Hi @ABraun, nope I did not create it using band math. The image generated after k-means classification is .img file format which is an ERDAS Imagine format. The conversion from that to geotiff does not result in any spatial reference information.

So what I am trying to do is to export out the segmentation file with spatial reference to begin with so that this issue with defining the projection later does not happen.

Which type of source product do you use? And which source bands do you specify for the k-means .
I see a check in the source code which can prevent copying the geoinformation to the target, but usually, it should work.

Hi @marpet, I am using GRD Sentinel-1 SAR product with IW swath. For the k-means I am using the GLCM texture bands that I generated.

Is there a step that I might be missing? The output band generated by k-means is an indices band. I went in and converted it into non-virtual band using Band Math.

I ended up writing a python script that does the k-means segmentation on the GLCM texture and output a binary image with projection metadata.

But I am interested in a solution within the SNAP toolbox.

Actually, the class_indices band is non-virtual already. I’ve used a Sentinel-2 product which is also in UTM projection and processed it with k-means and wrote to GeoTIFF. It had the correct projection and I was able to open it in QGIS for example.

Could you describe the processing steps in more detail and provide your input data.

HI sir ,i had the same problem ,which i need to export the sentinel -1 GRD produts form snap to Acrgis .however the geotiff image havn’t the space reference ethier.the image as follows: 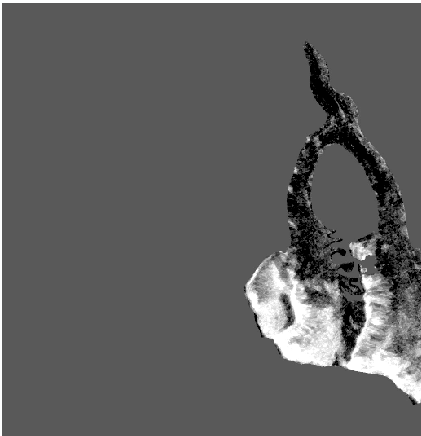 please reply me as soon as possible.

Did you apply Range Doppler Terrain Correction as a last step?
Why don’t you stick to the BEAM DIMAP format?

yeah，the last step is Range Doppler Terrain Correction，in the snap i had stick to the BEAM DIMAP format,the picture shown was in the arcgis ,which i had exported from snap already.

have you tried opening the img file inside the .data folder of the BEAM DIMAP product (after terrain correction) directly in ArcMap?

Yes,I tried .But has failed.so,what should i do .

for me it works: 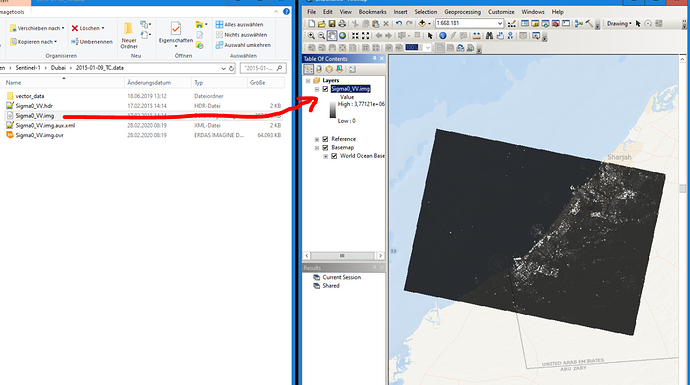 Are you sure you selected the right file?

Hello, sorry to re-invoke the thread.
I have a couple of doubts (maybe really basic) regarding exporting the S1 pre-processed image to the geotiff. I get the following error.

Also, I need to convert the data because I want to do Texture Analysis, which worked previously with beam-dimap. But now, it gives me a Null-pointer exception, so I thought maybe converting the product to GeoTIFF would help.

Sorry to club the issues
Thanks in advance

sorry, which processing step exactly raises this error? Have you converted the data to GeoTiff already?

I couldn’t.
I just tried to export the processed S1 data (which is corrected geometrically (EC) using Stereographic South pole projection).
Hence, the projection issue.
I had issues performing GLCM on the beam-dimap format of data, so I attempted to convert the format to GeoTIFF, which might help to process the data in QGIS too. But couldn’t succeed.

So you want geocoded textures but you cannot project the data nor convert textures.

I don’t undestand from your message if the data is already projected or not. But we should stick to one topic now, you distributed your problem over various threads, so I had to delete some of them to keep the forum clean.

I just tried with a resampled S2 in dimap format and the texture analysis is working fine. The same with S1B_GRDH with speckle.

Well, apologies for writing over multiple threads.
I just tried to figure out if it already existed and dropped messages thinking it would be relevant there.

Now, regarding the question,
Yes, I did project the scene (basic preprocessing is done till projection), applying textures is also possible.
I’m just unable to export it to GeoTIFF. It gives me the mentioned projection error.

And from the previous thread, after Textures, am unable to perform PCA on the same data. I’m pretty sure the textures has valid data as I cross-checked with histogram too.
Shall I post how the histogram looks?

maybe @marpet has an idea why the data cannot be written as Stereographic South Pole.

Does it work when you project to WGS84?

I’m sure, it’s projection error, but not aware of the reason.