Hi,
I am trying to co-register two S1 GRD images together with the ultimate aim of performing offset tracking.

For each image I applied the orbit file, performed thermal noise removal and calibration and then put them into a DEM assisted co-registration. There is an obvious shift or offset between the two image when they are put into a stack, as can be seen from the RGB of them below. 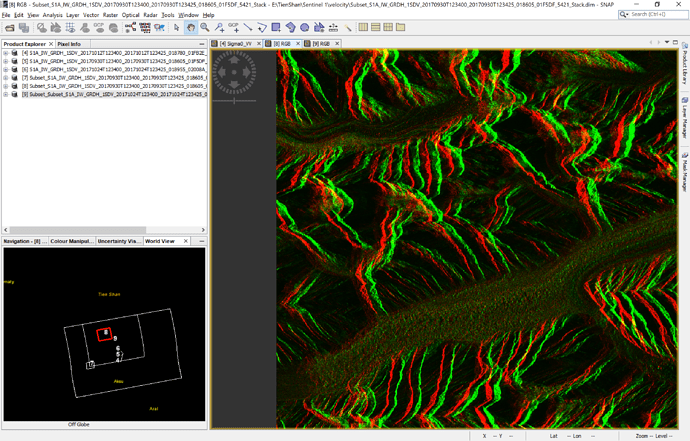 I have tried changing the DEM used in the co-registration and using images with 24 days seperation instead of 12, but I get the same result.

Any help on how to co-register the two images would be greatly appreciated.

if the offset is too large, you need to increase the number of GCPs and maybe reduce the fine registration window. Also DEM assisted coregistration might be an option.

Hi Andreas,
Thanks for the response. Since there are active glaciers in this area I didn’t think it was wise to use GCPs and I have been using the DEM Assisted Co-registration

If it is OK for you to work with terrain corrected images, I’d try Terrain Correction of the two images followed by Create Stack, to see whether that gives better results.
As described in this presentation:
ESA SNAP/Sentinel-1 Toolbox SAR - Coregistration Approaches & Change Detection

nice comparison, thank you for sharing!

Thank you both for your help. In the end the DEM assisted co-registration worked, I ended up increasing th size of the subset. I thought that maybe due to the mountainous terrain of the smaller subset there was not enough SRTM data to perform a good DEM-Assisted co-registration? Anyway, it works now so thank you very much!

it always depends. Pronounced topography is very suitable for DEM-assisted coregistration but if it is too extreme or the DEM is too bad, it no longer works.