Validation works best with independently collected reference data.
So you can inspect your image and manually digitize the ships you identified in a defined region, e.g. a bounding box containin g50 ships.

Inside this box, you count

You cannot count the true negatives (areas which are correctly identified as no-ship), therefore you can only compute the following measures:

Here you find how to interpret these: Evaluation of binary classifiers 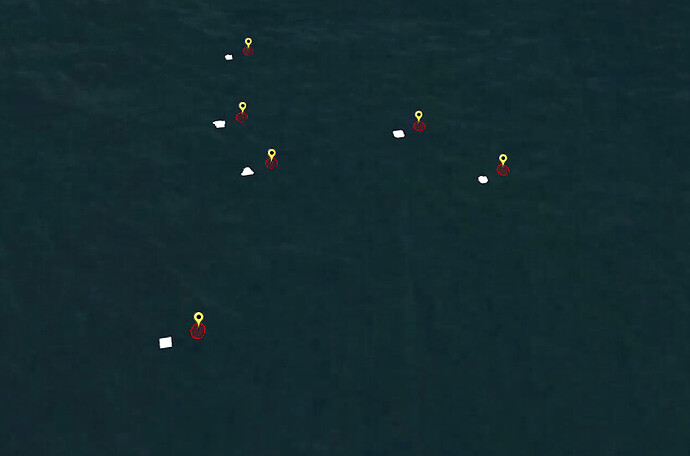 image824×545 34.2 KB
I had exported the Sigma0_VV_ship_bit_mask file as kmz to be viewed in Google Earth and the detection bounding circle and the detection objects are in different places. As seen in the pic above.
ABraun June 17, 2021, 7:00am #4

this could be because of

@marpet do you have an idea if this offset can be caused by reprojecting of ocean imagery?

do you have an idea if this offset can be caused by reprojecting of ocean imagery?

How are the detection circles generated? Are they taken from CSV file?
Then the “imprecision of the csv file” can be a reason.
@avibruce What’s the result if you import the coordinates into SNAP?

I had performed the SNAP Ocean Object Detection tool for the detection purpose. I have just started out with SNAP and SAR data so I don’t have much info on it but on checking the CSV file it does have the Detected_x and Detected_y (which I had deducted as the Location of the bounding circle so I guess they are taken from CSV file.

The result is the same in SNAP.

Then the wrong locations are written to the CSV.
If they are off in SNAP too, then the coordinates are probably not correct.
You can compare the location in the pixel-info view or in the status bar.
You can also set pins on the detected objects and export the pins.
Pins are also included in the KML export.

@lveci can you check the writing of the CSV file? 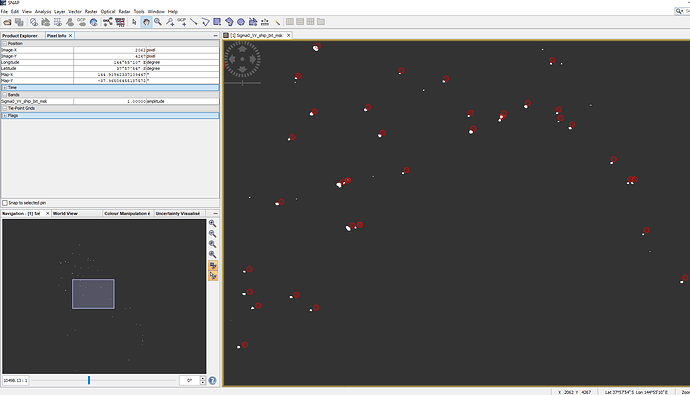 Hmm I wonder if at this location there’s a larger than average hight difference between the ellpsoid and the geoid?

The coordinates have only 3 decimal places. This is probably not enough. If you compare one of the the csv locations with the actual object location.
What are the coordinates.
What’s the resolution of your data? 10m?
For high resolution SAR data at least 4 decimal places are needed better 5 or 6.
3 decimals is only 100m.
See: Approximate Metric Equivalents for Degrees (usna.edu)
@lveci Are you cutting to many decimal places?
Or is this only a problem of the metadata display?

How can I set the number of the decimal places in coordinates to 4 or more? The resolution of data is 3m. 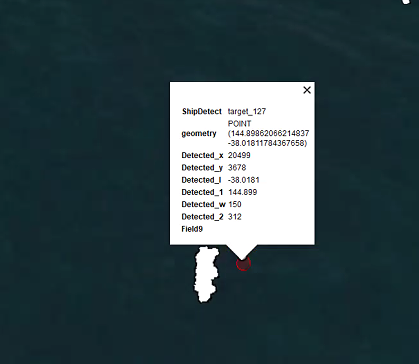 fig1
The ship detected coordinates for target_127 is as shown above in the image. This is the same in SNAP (Pixel info) but in the CSV the location is different for target_127. 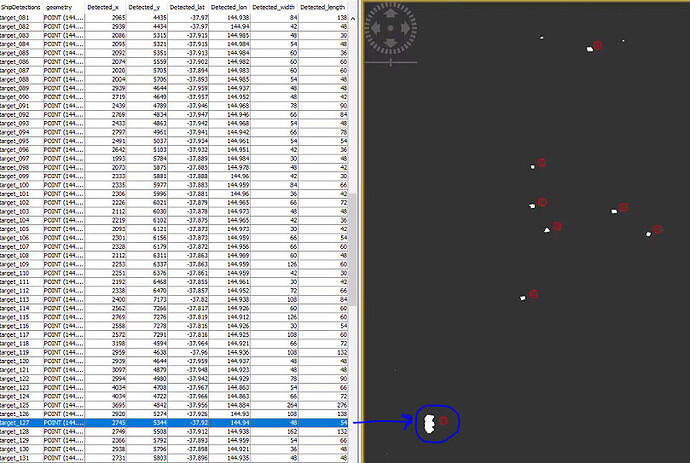 image809×543 165 KB
fig2
I don’t understand the how the difference got generated? fig1 is the shapefile generated from the Lat long in csv but when opened in google earth the location co-ordinates are different.

If anyone could explain it would be a great help for me.
Thank you.

You can’t change the precision. However, the values you show in the Google Earth example show more decimal places. So, I guess the CSV is okay.
Probably the metadata view shows only the most significant decimal places.
There must be another reason for the displacement. It is better that @lveci has a look at it.