Surface velocity remains a key parameter of the ice-sheet dynamics as they represents the direct response of the ice-shelves’ health. The easiest way to obtain bidimensional velocity is by using feature-tracking-like techniques. SNAP has such a function.

The pixel-offset module developed in snap is defined by a number of parameters :

We’ve also managed to modify the source codes of SNAP. This enabled us to export the azimuth shift and range shift raster images. In addition, we re-enable a hidden functionality to let the user select the oversampling factor used.

In short, the algorithm will look for each grip location the shift of range and azimuth that maximizes local correlation. This shift is considered as a bidimensional displacement. In order to get a better estimate of the 2D-shift, the search window analyzed is oversampled. The default oversampled value is 16 in each image direction. Said in other words, using default oversampling parameter, the smallest shift is a sixteenth of a pixel. Using GRDH images, it means a 0.625 meter shift in azimuth or range direction. Using a revisit time of 12 days, it means that the smallest detectable velocity is about 19 meters per year. More precisely, detected displacement are integer multiples of 19 meters / year. When resampling the grid to the input image resolution, pixels will be interpolated between this discrete set of values. However, areas of low displacements (between zero and ten meters per year) greatly suffers from this limitation. The algorithm is not able to detect the rich fineness of the ice-flux, crucial for locating precisely the ice divides. These ice divides are the regulators of the total mass flux of huge ice basin. Their location is important for the initialization of ice models.

It is important to note that if setting a oversampling factor to 64 allows to detect displacement of less than 5 meters per year, it is also much more computer expensive.

A second question to be answered is the choice of the post-filtering parameters, aka hole-filling and spatial averaging.

The first element to consider is the computation time. This element is crucial because it helps decide either or not we will put large efforts to produce potentially finer results. 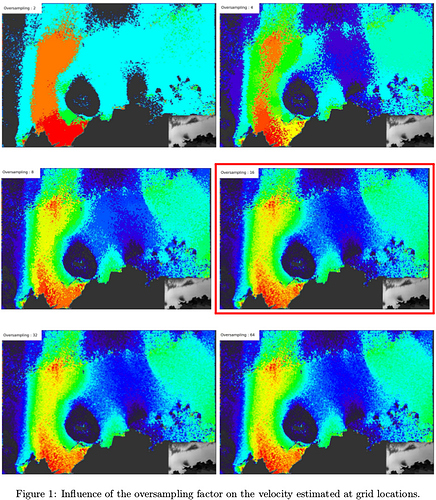 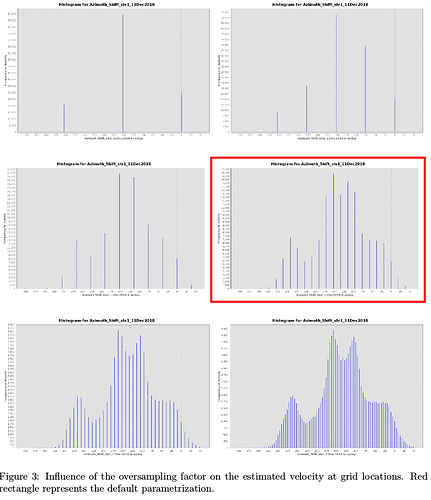 In the end of the algorithm, SNAP has a grid whose values are an estimation of the 2D displacement. This grid is not perfect for two main reasons :

As we can observe in figure 4, the SNAP post-processing (especially the spatial averaging) greatly reduces the displacement noise but also increases a lot the “blur effect”. The hole filling has almost no influence of the results. 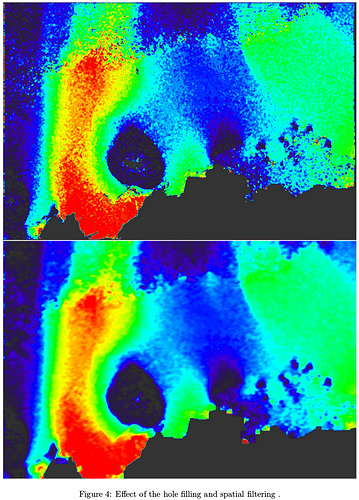 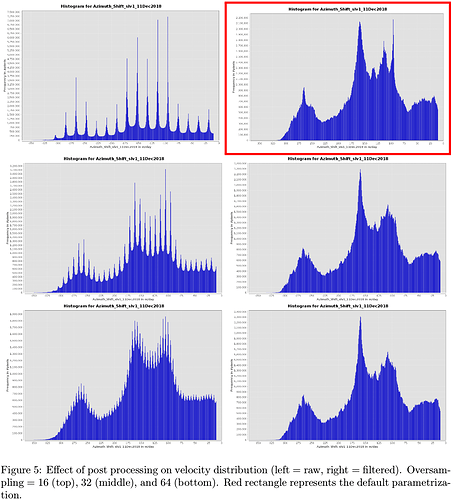 As we can observe, the oversampling parameter is an important element in the offset tracking algorithm. The balance between fineness and computation time is part of the equation but we would have appreciated to be able, as a user, to set this value to fit our needs. For the displacement detection of the jakobshavn glacier, it is sure that the default oversampling factor is more than enough. However, in most of the part of the Antarctic Ice-Sheet, this is too coarse.

Concerning the post-processing, as a researcher, it is sometimes better to have access to the raw results and do whatever is needed to make the velocity usable in our very specific context.

Fortunately, SNAP saves as CSV file the entire set of velocity estimates. It means that it exists a way to obtain these raw data. Nevertheless, there are formats much more suitable in geosciences to store a set of formatted and auto-documented 2D arrays : the netcdf. Netcdf would greatly helps the transfer of data from the remote sensing community to modellers.

Finally, it would be great if SNAP would be able to apply the Offset Tracking algorithm to debursted SLC images in order to take advantage of the very good range resolution of Sentinel-1.

EDIT : I totally forgot to thanks the developers who, by their hard-work, managed to help hundreds of users to get their hands on SAR data.

If you like, we could incorporate your modifications into SNAP + put parts of your analysis into the help.

Regarding offset tracking on debursted and detected SLC:s, we’d be interested in hearing your recommendations for the implementation.

Thanks a lot for your encouragements :

I already make use of my modifications, but here are the files. Please keep in mind that they are related to the SNAP 6. Also, for convenience, I compute the velocity to be expressed as “meters per year” as it is easier for me for comparison with scientific litterature.

Please check the little modifications of the code in case I did something wrong.

For the help, I’d be happy to contribute

If I can be useful in anyway, I’d be happy to offer my help

Related to the use of SLC images, I don’t use the phase information. It is possible to “trick” SNAP in order to do offset tracking with calibrated sigma0 values. I need to further investigate to see if ground range projected results are aligned with GRD products. A part from that, I think (i may be wrong) that extending the use of Offset tracking to SLC is a very simple task, if we only focus on the amplitude information of debursted coregistered images.

Thanks again Quentin, it has been captured here:

For detected SLCs, how would you deal with the pixel-dimensions? Let the user choose the output grid and let SNAP do the rest?

For detected SLCs, how would you deal with the pixel-dimensions? Let the user choose the output grid and let SNAP do the rest?

Are you asking that because pixels are not square ?

2 different strategies are possible. Either you do “as before” and compute on a regular grid, non regarding the pixel dimensions, or you set the grid spacing such as the grid is equirectangular in both dimension (in metric system).

In both case, the shift is computed in the slant-range dimension. This is crucial to be accounted somewhere, because if geoprojected, the velocity values are not corrected but simply projected on the ground. This produce a huge bias if not corrected by the incidence angle.

To say it in other words. Offset tracking using amplitude/intensity/sigma0 on SLC images is not much different than GRD. The care is to take on the fact that the tracked offset are computed in the slant-range direction, meaning that the range shift are to be corrected from the incidence angle when projected in the ground-range direction.

Just realised the registration oversampling parameter has been added in the offset tracking module. Thank you

interesting - can you maybe share an example on what is different with it?

@ABraun , maybe I don’t understand your request but the difference is already illustrated in the top post. The difference now is that this functionality is present in the official SNAP release. Before that, I had to modify myself a bit the java code and recompile the SNAP project.