and here is the result in .kmz file after TC. It is not create fringes at all.

Thank you for your comments 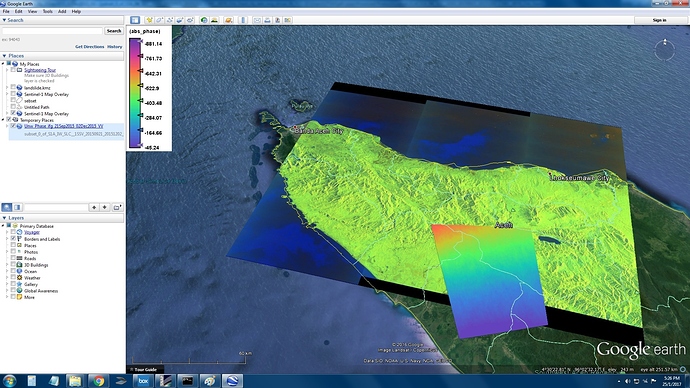 strong ramp in this one. If you look closer, is there any topographic information on this one?
Did you apply topographic phase removal? What is your goal?

I did topographic phase removal.

My goal is to calculate fringes based on interferogram achieved.
I want to see landslide movement in that part (Central of Aceh District). Based on ground data. there are a lot of landslide in October 2015.

did you have good coherence between the images? Maybe you can post a screenshot of the coherence raster and its histogram.

Which snaphu method did you allpy? TOPO, DEFO or SMOOTH?

You could also consider making additional interferograms based on other image pairs, before and afterh October, just to get an impression on the general information which can be retrieved from the data.

Please keep in mind that subsidence measurements from one or a couple if interferograms cannot be trusted due to the presence of atmospheric artefacts.

I attached of histogram in Takengon city (Near Lut Tawar Lake).

I have not repeat interferogram to other slave image yet.

I studied that large land movement for 2 m above can destroy fringes. but I am still lack study about atmospheric artefacts can be destroy fringes too. 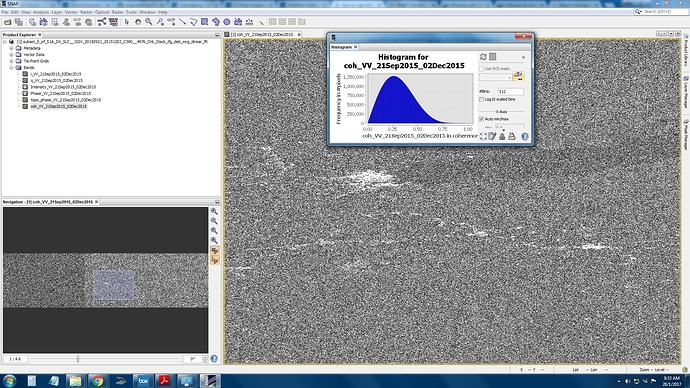 theoretically, only the white areas in your coherence image reveal usable information. Then there are still atmospheric disturbances left which could affect your fringes. Try to apply a coherence mask on your interferogram as described below to see if the areas of interest are within that areas.

right-click on the unwrapped phase, in the menu you find properties. There is an entry "valid pixel expression", where you enter something like coh_HH_11Feb2008_04Mar2008 > 0.6. Of course, the coherence name should be yours and the threshold can also be lower. Some say acceptable quality begins with 0.3 already.

If the areas of interest are excluded by this mask, you need better coherence. You can achieve that by using an image pair with smaller temporal baseline (6/12 days are currently the smallest for Sentinel-1). You can also try to apply a better co-registration in order to improve the image alignment.

I will work on that.

There only 24 days available data S1A on that area. I could not have 12 days or 6 days data

So how to do better coregistration.

Thank you for answering all my questions

maybe one of these points helps:

You can increase the number of GCPs for the coregistration. This could lead to better results at some locations. Also try to use a second order polyonomial and trucated sinc interpolation. These things won’t increase the overall quality of the data but baybe lead to smaller improvements.

24 days is simply too long to allow for higher coherence. 12-day data should be available over your area by now.

Thank you Dr Marcus Engdahl and Dr Andreas Braun for your comment.

is it ok if I coregistrasion and make interferogram from these image (I will chose VV polarization). I doubt GRD mode can not produce any interferogram.

GRD only have amplitudes. You need complex data for interferometry. You need the SLC products.
https://sentinel.esa.int/web/sentinel/user-guides/sentinel-1-sar/product-types-processing-levels/level-1

So no data for that particular area below 24 days for SLC.

I though Sentinel 1A and 1B should have 6 days data in that particular area.

right, you need products of same polarization. But not all areas are covered equally, as you see here:
https://sentinel.esa.int/web/sentinel/missions/sentinel-1/observation-scenario

yes, same polarization but not same IW number can not proceed Dr Braun, is is right?

one more thing,
low coherence will affect interferogram. a lot of site in Indonesia, especially in Aceh Tengah, low coherence is presented due to high vegetation. It means I have to elliminate result of DinSAR and can not use Sentinel data to produce a good interferogram due to atmospheric disturbance.

I read some papers. It is low coherence present but at least unwrapping phase can be proceed to D-InSAR with other sensor such as ALOS.

Sorry out of topic, I should move to another topic, but don’t do where to put. just go through my question and answer

every SLC product consists of 3 sub-swaths (IWs)
If your images are taken within the same track (which means they geographically align and have the same extents) there should be no technical problem using them for interferometry.
You can use the TOPSAR Split module to select only one of the three sub-swaths to decrease the file size.

About coherence: It is generally destroyed by vegetation cover. But if you use long wavelengths (ALOS PALSAR) you have higher chances to penetrate some of the smaller vegetation and get coherence from the surfaces. This however ends at high canopies.

Some more points to consider:

Dear ABraun：
I am a new user of SNAP, according to the tutorial you given above, the smooth installation of cygwin and SNAPHU, but when I put the contents of the red box on the contents of the paste -ENTER, there is a problem shown on the picture,I did not get the desired result，and I do not know why, Hope to get your answer, thank you very much! 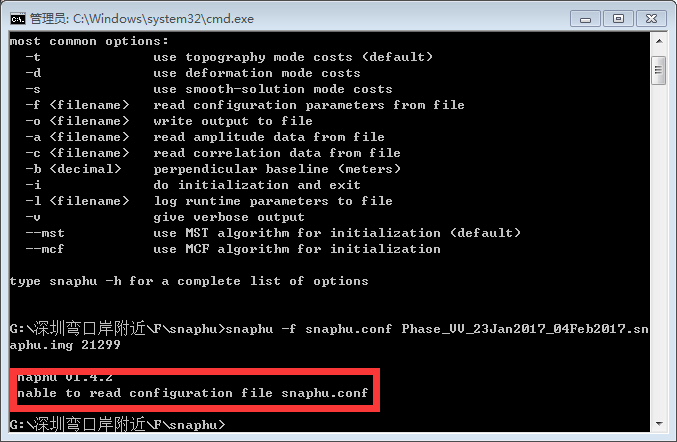 ntents of the paste -ENTER, there is a problem shown on the picture,I did not get the desired result，and I do not know why, Hope to get your answer, thank you very mu

somehow the file extension *.conf is not recognized by your command. Try renaming it to snaphu.conf and run again.

When I was installing the cygwin , it says the following error. Could you help me solve this problem. Thanks. 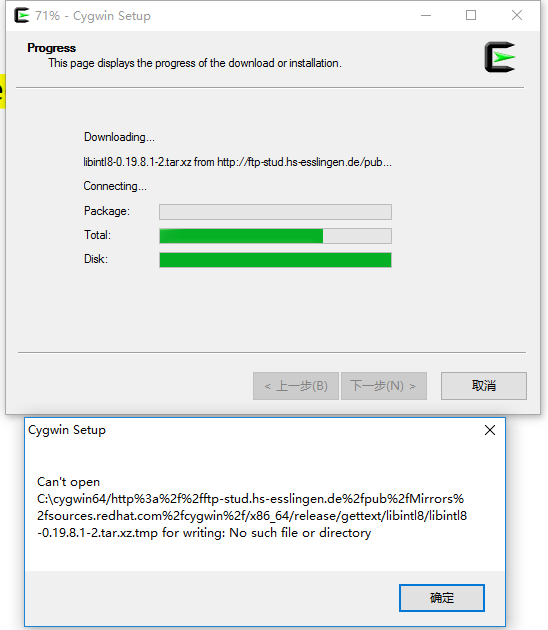 I’m not experienced with cygwin so unfortunately not. But you should try a server which is a bit closer to you than Esslingen in Germany