Is this due to some strong radio interference? I don’t suppose there are ways of removing it in toolbox processing?

Yes stripes are due to radio frequency interference (RFI) from the ground. Although it can be removed in the processing from raw data (Level 0) to image data (Level 1), this is not performed by the Sentinel-1 Instrument Processing Facility (IPF). It cannot be removed from the processed Level 1 image such as the one you show.

ESA are aware of this issue.

This can also be caused by interference from other C-band SARs like Radarsat-2. This should be flagged somehow by the IPF. Can anyone think of a good way to detect this? Currently I need to scan through the quicklooks and delete any products with bad interference.

The two types of RFI can be distinguished by their duration. For RFI from the ground usually only occurs over a few km in azimuth while the mutual RFI can last for a few minutes. Slides 28 and 29 of the presentation at http://sarcv.ceos.org/documents/doc/156/ show examples of the two types of RFI.

Iveci, why do you feel it necessary to delete product of RFI, especially as the RFI only affects a relatively small part of the image?

Peter, nice presentation. I especially liked the examples of the trains.
I delete these when making mosaics. Although for RFI from the ground it may be possible that the interference is usually there over that area.

Peter - out of curiosity, do you know why the interference is not removed? Are there downsides to doing it?

Sorry, I ve been reading all you have written and also the info that Peter Meadows have shared. My question is that I ve been studying Sentinel 1 images for academic purposes and I ve seen many times strange brights along a few images. Brights as “stars”. For example in this image of south Gran Canaria (Canary Islands) there is an strange bright… is it a corner reflector or what?

The first one is Sigma_0_VV, the second Sigma_0_VH. I have calibrated and terrain corrected them. 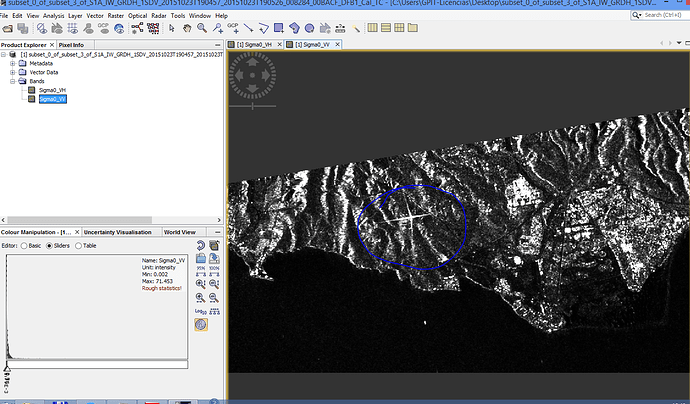 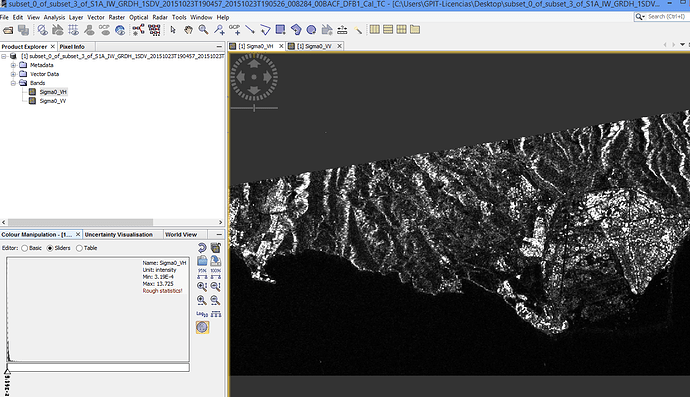 This bright object (referred to as a point target) is actually the ESA ground station at Maspalomas - see http://www.esa.int/Our_Activities/Operations/Estrack/Maspalomas_station for more information. You can also see it in Google Earth - zoon in at lat 27.763308, long -15.632540 deg.

Like many point targets, the response is quite different between polarisation combinations. A trihedral corner reflector point target (https://en.wikipedia.org/wiki/Corner_reflector ), for example, will only provide a response in HH or VV and not in HV or VH. This is the case here. To get the response in the S1-A image, one of the ground station dishes must have been pointing at the satellite (and most likely downloading data) at the time of acquisition.

Thank you very much for your quick answer. Im just surprised about the ground station at Maspalomas. I live here in Gran Canaria and I have even been there (many years ago) as a student visitor. I dont know how I didnt think about it! Yes, that´s the location, Maspalomas! Anyway, I had to confirm it. I can understand and imagine that this is the record of the reflection of ground station antennas and structures. It´s very useful to know the cause of this bright.

Thank you very much again for your unvaluable help and for solving my doubts.

I have checked with Google Earth files on KMZ…! It´s the Maspalomas Ground Station. It´s perfect. Since now and then I will check on optical images before (such as Google Earth) to see what´s in there. Also for whoever who read this post. 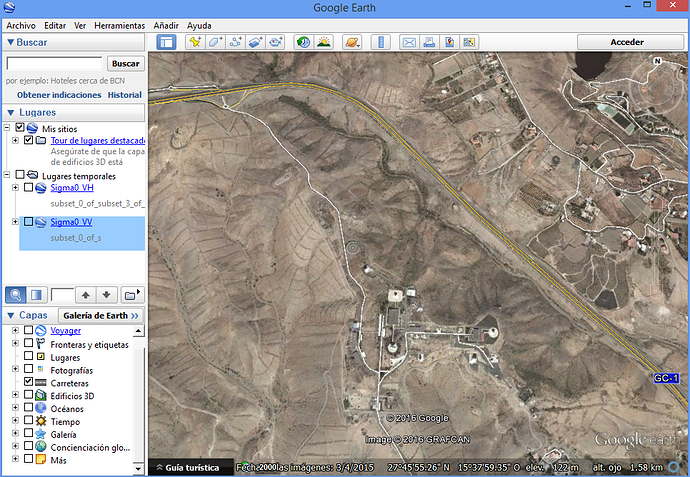 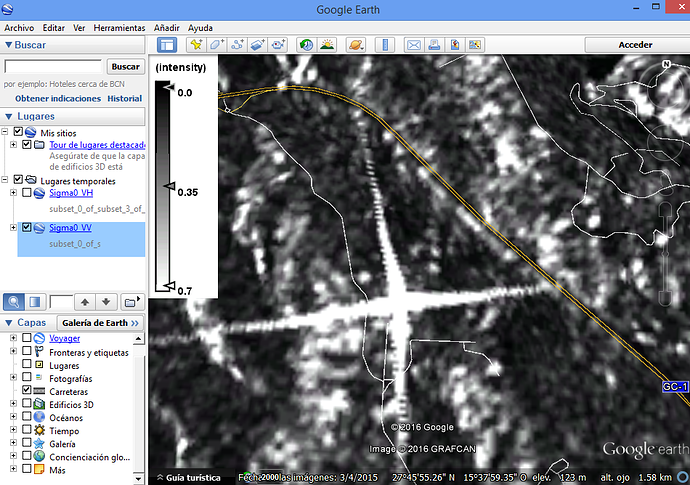 Could you please explain a bit more about why the trihedral corner reflector would only provide response to co-polarizations? (being visible in VV/HH/ images?)

I think that is due to the fact that a specular surface (even 3 of them in the trihedral reflector case) does not change the emitted polarization. So co-pol gonna back intensely while cross-pol not.

a specular surface (even 3 of them in the trihedral reflector case) does not change the emitted polarization. So co-pol gonna back intensely while cross-pol not.

Thanks for your explanation! All clear to me now