while sub setting the same area covered from S-1 (Sentinel-1) data, the subset data is mismatch from two dates as shown in the image.

could some one help me to solve the issue.

The required area for the study is the combination IW1 and IW2 sub swaths.

I have followed the order to merge the data.

If I multi look before deburst, the individual IW1 and IW2 GR pixel values are different.

why this is happening, if both are drawn from same file. 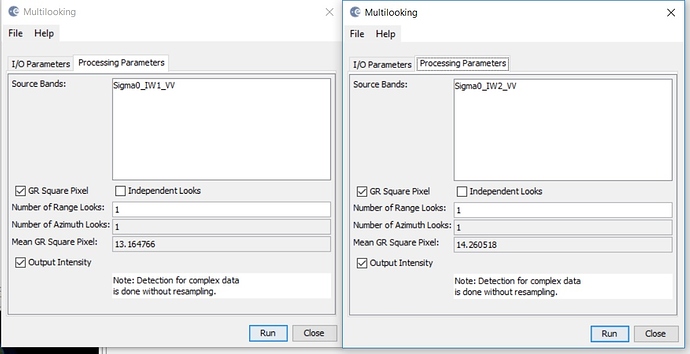 Did you found any solution to your problem?
I am facing similar issue with Sentinel-1 datasets. I have generated InSAR based DEMs using two pairs of Sentinel-1 SAR images (one pair of 05/01/2020 - 11/01/2020 and other pair of 10/04/2020- 22/04/2020 for same geographic region). While subseting a common area out of two generated DEMs, in SNAP it shows same size for two subsets but when its zoomed in at 2m Worldview resolution, it shows some gap between the two subset. When checked, the two subset images has different rows and columns for the same area subsetted and the two DEMs also has different raster size. But if subset is created for a common area of interest in both the DEMs why is this gap and different number of rows and columns observed in pixel data information?

I guess this is because both DEMs were generated based on different reference images (05/01/2020 and 10/04/2020). When you terrain correct them, their pixels do not fully align even if the spatial resolution is the same. Accordingly, applying a subset to both based on coordinates the image is cropped to the pixels which are next to these coordinates.
If you want them to have the exact numbers of rows and colums you first have to create a stack of both and then you can create a subset of the stack.

thank you for the response.
for further processing i require two subset images of these DEMs, so creating a stack would not generate the desired results. what else i can try?

for further processing i require two subset images of these DEMs, so creating a stack would not generate the desired results

Please provide more information why the suggested solution does not help.

I will try to explain you my work.
Firstly, I am generating InSAR based DEMs using multiple image pairs of Sentinel-1 datasets (selecting suitable baseline and ascending/descending nodes) for my study area. Now, I have two such DEMs(Coherence and elevation image) for a my study area, I want to compare the elevation values for the two DEMs for deriving my desired output. So, I want to take subset of an area of interest from the complete scenes and compare the elevation values in two images and derive my output. But while taking a subset for same AOI, I am getting this row column mismatch issue.
I have tried performing using your suggestion, please see the attached results. 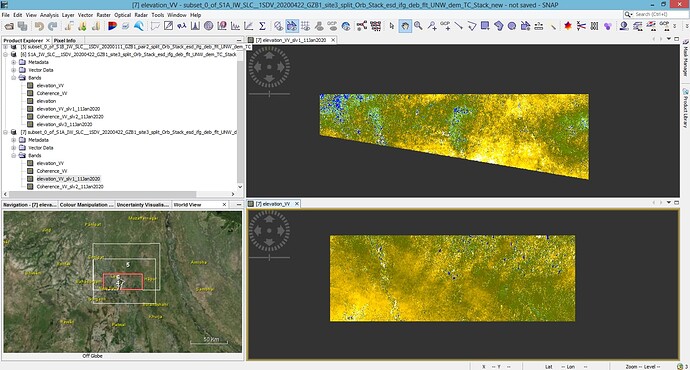 Thank you for explaining.
To me this looks like the two DEMs do not cover the same area, or at least they are only partially overlapping within the subset.
Still, if you need subsets if both with the same numbers of columns and rows, having them in one product is the first step.

So the subset you define only covers parts of the northern product. The footprints shown.in the World View tab do not consider that the images are rotated after terrain correction.