hello anyone. I would to ask something.

the sub-swaths result from the TOPS image acquisition mode. Each of them is not better/worse than the others at first.
https://sentinels.copernicus.eu/web/sentinel/technical-guides/sentinel-1-sar/products-algorithms/level-1-algorithms/topsar-processing

What clearly changes is the off-nadir angle for each swath, meaning that the signal hat different ‘looking angles’, additional to the incidence angle which changes from near to far range:

thank you. It’s really help out

usually, the incidence angle is usable as a raster value per pixel in the tie-point grid menu. Instead of using one value you can use the raster as a variable for the calculation.

This gives you the relative change between two satellite images in centimeters
Source: http://www.esa.int/esapub/tm/tm19/TM-19_ptA.pdf, chapter 2.3.

HI ABraun, thanks for your helpful response. So if I have an unwrapped phase band for my AOI it is possible to do this calculation to solve for ‘incident_angle’? And is the variable ‘rad’ in the equation radians?

Also, I cannot see the section on this in the TM pt A. Is it possible it is contained in another section?

if you imported your unwrapped phase back in SNAP you need to name a reference data set. By doing this you can use its incidence angle raster for band maths. Rad means to use the radians function on the angle value. 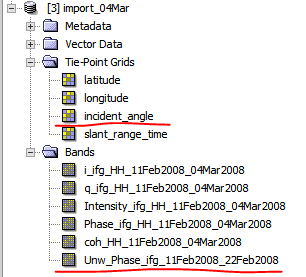 Thank you, I understand now. Is this example of unwrapped phase derived from SNAPHU? I have been using GAMMA to unwrap the SNAP interferograms and the GAMAM unwrapped interferograms are not readily importable into SNAP. So maybe this procedure isn’t open to me.

yes, this is based on unwrapping from SNAPHU. There is a Gamma import in SNAP as well but I’m not sure how to get this data back into the SNAP format with all it’s metadata and tie-point grids.

I don’t know if it’s lost when using Gamma format.

Thanks again ABraun. Can the incidence angle be used as an approximation for the off-nadir angle?

I’m not sure, sorry.
Maybe someone other can answer this.

The off-nadir angle (look angle) is B. The incidence angle is A.

The tie point grids have 10 or 20 samples in range that are then interpolated on the fly.

Thanks lveci for the clarification. I can see you can get incidence angles from the tie-point grid in the metadata. Can the same be done for the off-nadir angle somehow?

should be 90 minus off-nadir angle in this case. I wasn’t aware of the terminology about “off-nadir” but incidence angle is always measured from the earth’s surface.

I have a question to ask regarding interferometric processing using SNAP.
I applied step-by-step processing work flow for S1A imagery, and retrieved three filtered DInSAR maps that are already de-bursted for IW1, IW2, and IW3. Now, I need to stitch (merge) them together. Which tool in SNAP can be used for having a complete deformation map extracted from S1A IW scene?

Thanks for your attention,
Regards,
Negin