I generated DEM from TanDEMX images with Phase to Height function after phase unwrapping. But the altitude value range from negative to positive. How can I correct this, probably using GPS station coordinates, and bring it to real world values?

you could right-click your product and download the SRTM raster additionally and then use the scatter plot to plot values of both rasters against each other. This will give you an idea about the vertical shift.

Thanks for suggestion! I tried it, but interesting thing is, the max - min difference in SRTM 1 sec is about 1400m, whereas the same thing in DEM I generated is 660m. I could not know, why this?

that is quite strange. For me it looked more like this and I was able to derive a regression with quite high r²: 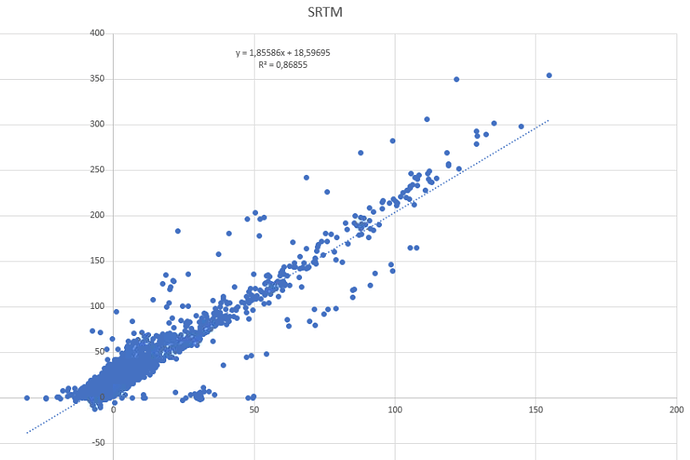 Especially the yellow ares shouldn’t be divided into more parts.

Can you please show a screenshot with both rasters, the InSAR elevation and the downloaded SRTM?

Thanks! The Upper is the SRTM 1 sec and Lower one is the InSAR Derived one. I wonder why there is some rectangular geometry on the DEM. 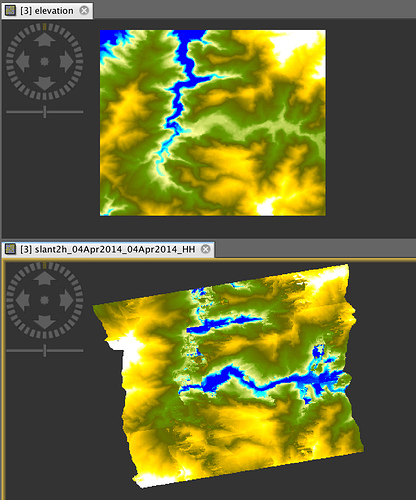 well, this explains the pattern of the scatter plot. Especially the low values (blue) are spatially different, leading to a wider range of the values.
In general, you should have a look at the coherence of your image to see where you can use the InSAR information. I would then suggest to make a scatterplot based on only high coherence areas.

Thank you Braun. Here please see the coherence and its histogram. If I discard the coherence below some value (take 0.4 for eg.) for DEM generation, how would that effect the DEM then? What is the general practice when coherence is like this here? 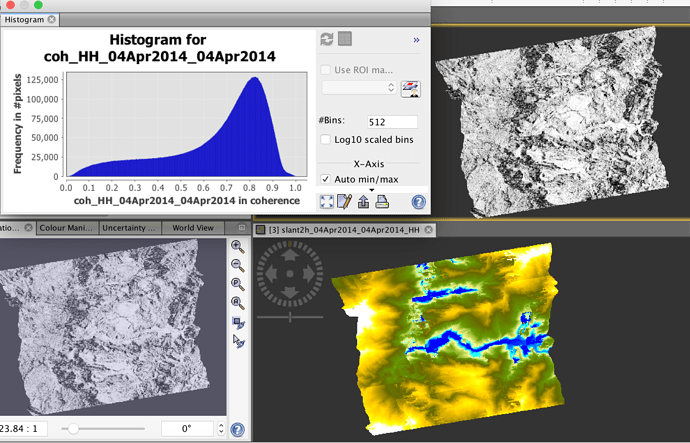 coherence is a measure for the quality of the interferometric information. If coherence is high (just like in major parts of your image), you can more or less trust the unwrapped interferogram to be correct. Areas of low coherence (the black ones) are decorrelated due to changes in landcover or atmospheric distortions.

You can define a valid pixel expression for the InSAR DEM in the band properties (coherence > 0.3) to mask out all low coherence areas from the scatterplot. The result should then be clearer in terms of relation to the SRTM.

This discussion might be helpful to you. It deals with Differential InSAR but the principle of masking out low coherence areas is the same: Subsidence map in 3d view

SO, after applying this coherence filter in band properties, will the DEM generated be void in those low coherence patches? I applied coherence threshold of 0.3 in unwrapped phase as you suggested in (Subsidence map in 3d view), and then applied ‘Phase to Height’ to get DEM. But the DEM looks as before that I got without coherence threshold.

yes, the unwrapping doesn’t take into account low coherence areas. All you can do is apply the low-coherence valid pixel expression to the output DEM to mask out these areas.
What I meant was that you exclude those areas for the scatterplot so you might have a clearer idea on how the InSAR elevations are shifted compared to the SRTM. The scatterplot above looks too noisy, probably also because of low coherence areas.

Thank you. But it says ‘Expression is invalid’ if I apply the low coherence threshold to output DEM.

you must use exactly the name of the coherence band and it must be included in the same product stack.

Yes, but after applying ‘Phase to height’, the resulting stack does not include coherence but only the altitude .

If you want to mask the coherence you need this layer in your product. Otherwise the ‘valid pixel expression’ has nothing to refer to.

Therefore you need to select all of these source product in the Range Doppler Terrain Correction module so they remain in the output product. 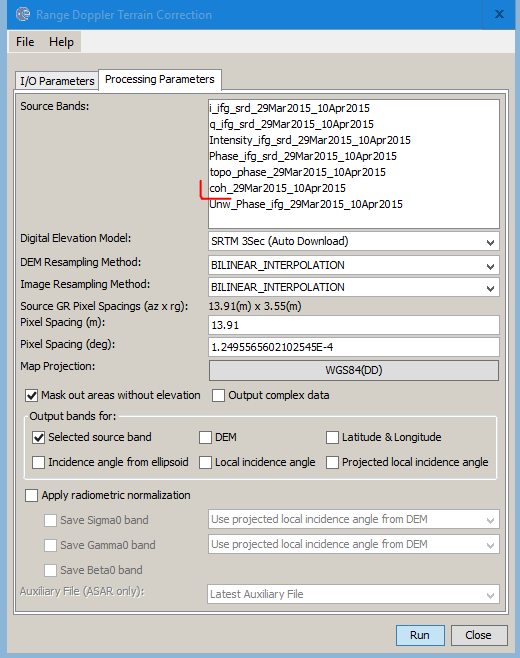 Terrain correct both the height and the coherence and then make a stack of both.

Thank you. SO would you suggest to apply terrain correction to the unwrapped stack, and then only proceed for DEM creation step?

You need to stack a product where the coherence is still present with the generated height information. If you do this before terrain correction or afterwards is not important as long as the rasters match each other.

Use Radar > Coregistration > Stack Tools > Create Stack and load both products. The result will have both height and coherence which can then be used for the masking.

Hi ABruan, I prepared another DEM using ‘Phase to Elevation’ and shown alongside with STM 1 sec below. The altitude range is better than ‘Phase to Height’ generated DEM. Still, it looks like there is vertical shrink in DEM, I mean the lower altitude in pushed to higher value (eg 300m in SRTM in 450 in Insar DEM) and higher altitude is pulled to lower value (g 1700 m in SRTM in 1440 in Insar DEM). It looks like the altitude in both DEM matches around 800m value. Why does this happen? I once tried with Coherence mask at phase filtering step, before snaphu export, but it also wont improve the result much. The scatter plot is also bit improved, but has a shift towards x axis. 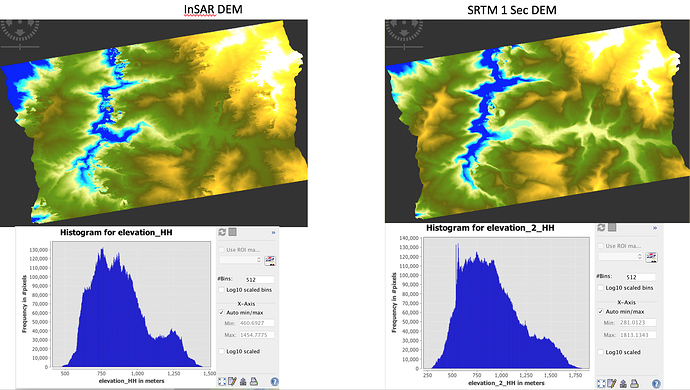 if you can derive the linear equation from the scatterplot you can apply it to your InSAR DEM values in order to adjust them to the SRTM heights.

Could you please detail the steps?

it’s simple linear regresesion. Just extract some values pairs of SRTM (X) and InSAR DEM (Y) and derive the equation, e.g. in Microsoft Excel. Insert your InSAR DEM in the equation to adjust it to the SRTM values.