I use snappy Python module to process Sentinel-1 data. My code is at https://github.com/kedziorm/mySNAPscripts/blob/master/myScripts.py

When I process only one file (run ipython, paste mentioned Python script, call appropriate functions) I have no problems. However if I try to process multiple files, I finally get an exception.
I’ve thought that some objects might not be removed from the memory, so I set them to None:

changed 1 files with 16 additions and 0 deletions.

changed 1 files with 2 additions and 0 deletions.

I still receive the same error message as previously (so I’m pasting previous error message).
How can I fix that? 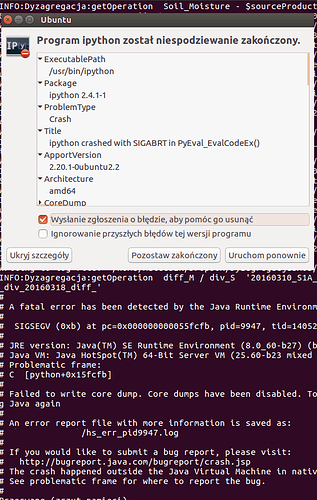 I had this error when trying to open SNAP.

Remove the org-esa-snap-snap-worldwind.jar from the snap folder and back up it in an other folder on your computer.

I’ve no idea where this error might come from. But it’s not the world-wind module.
Looking at the error-log I would think it is somewhere in the native python code.
In the screenshot ipython 2.4.1-1 is mentioned. Maybe the problem is there. I don’t want to say that SNAP/snappy might not be guilty but I can’t see it.

Could you suggest any idea of trying to find a source of the issues?

Should I start a “raw” Python (just typing python and execute all the code within it?) instead of using ipython?
Should I ask about ‘ipython’ memory issues on http://stackoverflow.com (I’m not sure if it is causing this issue, so I would like to ensure).

I have the same problem as reported here when processing a series of S2 data. At each product this bit seemed to cause problems:

I have tried different tricks as the one posted here (garbage collector, increase virtual memory…). I have also monitored the memory consumption and found not to increase.
I have also moved the file “org-esa-snap-snap-worldwind.jar” as you suggested and the execution did not work yet. My assumption is that the JVM does not release memory correctly but I cannot see the reason why. I try to “dispose” and clear memory but does seem not to work

Following these comments, I have found a “dirty” workaround to the problem.

The trick to avoid this JVM crash has been solved in my case by externally managing the program with a bash command.
#! /bin/bash
for initprod in seq 0 64;
do
python run.py $initprod $((++initprod))
done

By doing so, it seems that I can run as many products as I want since the JVM is initialised and cleared at every iteration.
It makes the programme structure a bit more tedious but it is a current limitation of jpy library since, it cannot “shutdown the Java VM from Python and then restart it”.

From my experience this crash is caused by calling jpy.get_type multiple times. Only call it once at the beginning and your crash should be solved. See this thread.