I observed residual thermal noise on several of my Sentinel-1 products. My initial thought was that there were problems with the annotated thermal noise vectors, and I reported it to Copernicus EO Support. They responded: “… tends to indicate that there is an issue with the denoising performed by SNAP”. This image produced by EO Support compares IPF vs SNAP denoising: 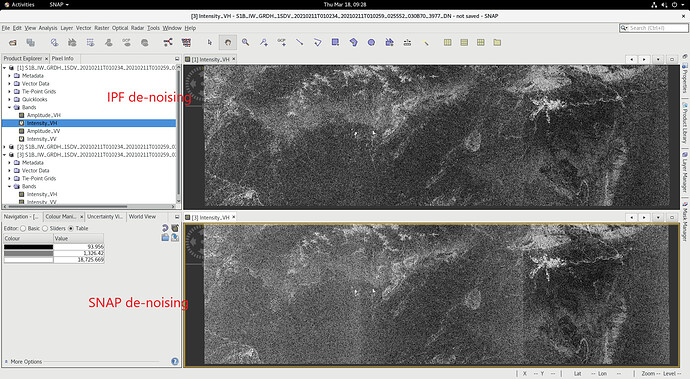 The following is the Technical support team’s reply, we would like to inform you they have analyzed the following GRDH product on relative orbit 151.

First, it has been checked if there could be any problems with the annotated thermal noise vectors.
To do that, it has been performed de-noising manually and compared the results with the de-noising performed directly by the IPF (specific processing configuration, not used for nominal production). The results are shown in the figure denoise_comparison attached.
The resulting de-noised images do not show any evident artefacts and there is no significant difference between manual de-noising and IPF de-noising. This means that the provided thermal noise vectors are correct.

Assuming that you are using the S1TBX to perform the de-noising step, it has been compared the de-noised image produced by SNAP with the image de-noised by the IPF.

The results are in the screenshot snap_log attached.
It seems that the image de-noised by SNAP has significant differences with reference to the one produced by the IPF. This could explain the behaviour reported.
This tends to indicate that there is an issue with the denoising performed by SNAP. We did not check with Gamma as we don’t have access to it.

Finally, we kindly invite you to consult the following TN https://sentinel.esa.int/documents/247904/2142675/Thermal-Denoising-of-Products-Generated-by-Sentinel-1-IPF, explaining in detail how to use the denoising information for removing the thermal noise contribution, considering also azimuth denoising annotation, which have been added since March 2018 to the already available range ones.

EO support performed a validation of Thermal Noise Removal, and compared IPF to S1TBX.
S1TBX is not correct. Has this post been over looked? @jun_lu who should I ping?

Thank you for reporting the problem. A JIRA ticket ([SITBX-892] ThermalNoiseRemoval not operating correctly - JIRA) has been created to track the issue. We will look into the problem

The problem has been fixed. The fix should be included in the next patch release. Thanks for pointing out the problem