Currently I’m working on a project using the SEN-ET plugin, but today I received an error that seems to be caused by SNAP itself rather than the plugin which has been running fine for several sessions beforehand.

I first had the problem when the Sentinel-2 Pre Processing Graph from SEN ET would no longer work with an L2A tile - “No Stream from file”. It had worked previously on 3 other tiles which I had downloaded from CREODIAS, but this time it wouldn’t function.

I looked into the original tile itself to see if it was corrupted, and that wouldn’t open any raster from the bands directory. At first I thought it was a corrupted file, but then I found the previous tiles also showed the same issue as “Failed to Create the Stream from the Tile”. Suddenly, none of them could be opened despite working the day before, and I believe this is what was causing the SEN ET Graph to stop functioning. The error logs are detailed below

I looked up this error before writing this, and tried the Java Memory increase arguments listed on the FAQ, but the same error appears. I’ve also closed and reopened my SNAP session, reopened SNAP with only one product to work one, and restarted the entire computer to clear the memory in case it was under heavy use. None of these methods worked.

It’s strange as I have never had this memory issue before - I have 16GB RAM available and have processed larger Sentinel L1C swathes before, and yet after assigning 11GB to Java under Tools > Options > Performance, the issue remains. Interestingly, I can still load other .nc bands into SNAP (An ERA-5.nc CDS product) as that only has dimensions of 12x20 pixels.

So what is wrong here? I can’t even view a Sentinel Product, let alone use the Graph Builder to process anything.

Thanks for the report.
It sounds like as if there is an issue with the jp2 files of the Sentinel-2 product. But you said you were able to open them before.
Have you tried to open them in another application like QGIS?

after assigning 11GB to Java under Tools > Options > Performance
Changing the memory with this configuration tool will not help as this is not considered by the Java runtime used by SNAP. The FAQ entry you have linked is the right way to do it.

Your report means you cannot open any Sentinel-2 product neither L1C nor L2A, right?
Have you installed the latest update? On Monday there was a update for the Sentinel-2 Toolbox.
Can you tell the names of few of the products you have used?
Have you tried a product from the Copenicus Hub?

Hi Marpet, thanks for helping!

I opened SNAP up again today and the same problem appears for both L2A and L1C data - however, Sentinel 3 imagery does open when downloaded from the same source. I’ve attached an image showing the LST loaded in whilst a Band from the L1C image brings up the same error as before: 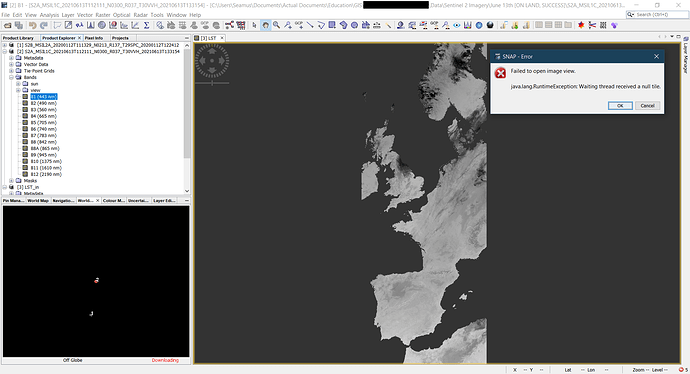 And the .Jp2’s seem to load normally into QGIS without issue (Band 8A from the same L2A S2B folder as listed above): 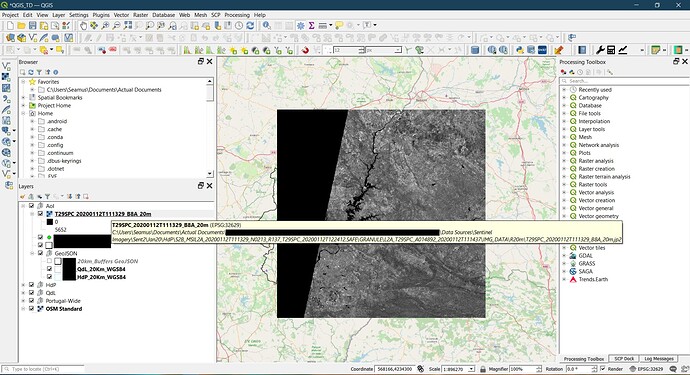 SNAP also reports it is fully up to date, as are all the plugins. I’m afraid I can’t give much more information to narrow down the issue, it was a literal night-and-day change when it stopped loading in the Sentinel 2 data.

Thanks for the additional information.

@oana_hogoiu or @FlorianD Do you have an idea what’s wrong here?

Could you check to open only one spectral band granule with SNAP from the jp2 file?

Hey, that worked! So the imagery itself is fine, maybe SNAP suddenly doesn’t like the MTD_SIL2A.xml file? 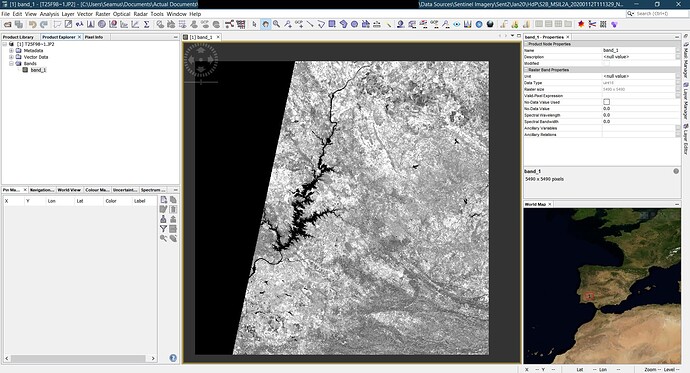 Thanks. So, I think it is not a JP2 reader issue.
But, rather an s2tbx reader issue. I will look at on the s2 reader and try to reproduce your issue.
I will let you updated.

Maybe the file name length could be involved. Do you have disable the filename length limitation?

I’ll try that, thank you! Though I think I remember having that disabled, and filenames were never an issue before either.

Unfortunately the situation has developed for the worse somehow and now I can’t open SNAP at all. Since the error coming up is also JVM related, perhaps that is what has failed? 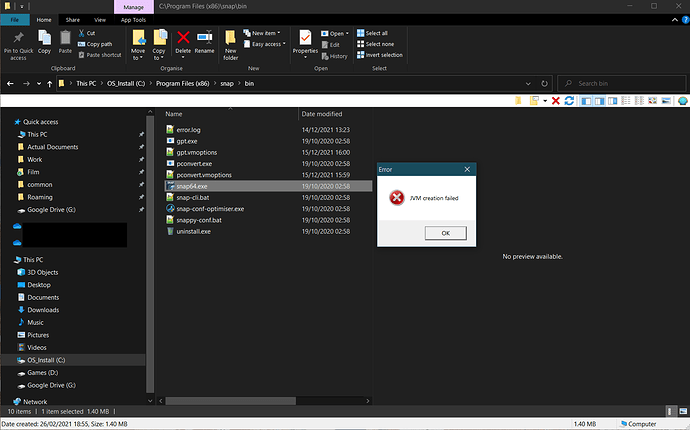 The only thing I have done since the initial issue started was increase the allowed maximum memory capacity to 12G (-Xmx12288m) in the gpt.vmoptions, pconvert.vmoptions, and the snappy.ini files as directed by the SNAP FAQ.

The content of the error.log I see in the screenshot might be interesting. Can you attach it here?

If you want to change the memory for the Desktop applicaitonapplication youu must change the snap.conf. This is also described in the SNAP FAQs

Of course, my apologies. Here is the error.log contents:

For context, the ‘G:’ drive is my Google Drive. I don’t have any Sentinel imagery or SNAP software/files stored there, everything is stored locally on the C: drive.

I have no ideas what’s going on.
Those messages are just warning. So, they should not disturb the startup process.

Maybe you should uninstall SNAP and start with a fresh installation.

I was worrying I’d inevitably have to do that, re-configuring SEN ET will take some time

.
Thank you anyway @marpet and @FlorianD for your help!

Your reminder to check the snap.conf file to increase the memory allocation there worked at least (SNAP opened!), but unfortunately renaming the folder containing the imagery did not.

Out of curiosity I tried opening the original downloaded .zip files to see if they worked, and they open everything as normal! I might try to continue on a little bit further with my analysis using the .zip files instead as inputs as a workaround for now. I’m adding this for more information in case the problem returns after a fresh install or if it happens to someone else again.

The .zip opened in SNAP without issue (Product [2]) 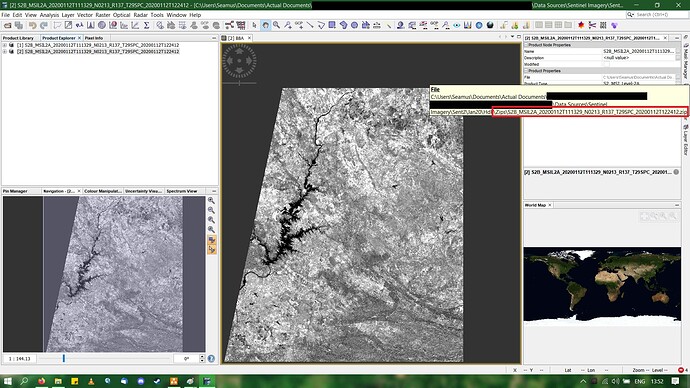 but the unzipped version of the same file (Product [1]) brought up a related streaming error:

Thank you both again for your help!

Which tool do you use for unzipping
In the past were issues with WinZIP and the internal unzip tool of Windows.
Search results for ‘winzip’ - STEP Forum
The tool 7zip always worked.

I saw these threads too and thought it might have been that, but I’m already using 7zip to extract the .zip.

I should have mentioned that earlier, my apologies.

After a couple of days getting by using just .zip files as inputs, the error cropped up again unavoidably in further processing.

As a final ditch effort before a fresh install, I deleted the ‘module’ folder located in:
C:\Users\Seamus\AppData\Roaming\SNAP\modules (replace \Seamus\ with your own user account), and now I can load up the Sentinel 2 .jp2’s via the MTD_SIL2A.xml file again! 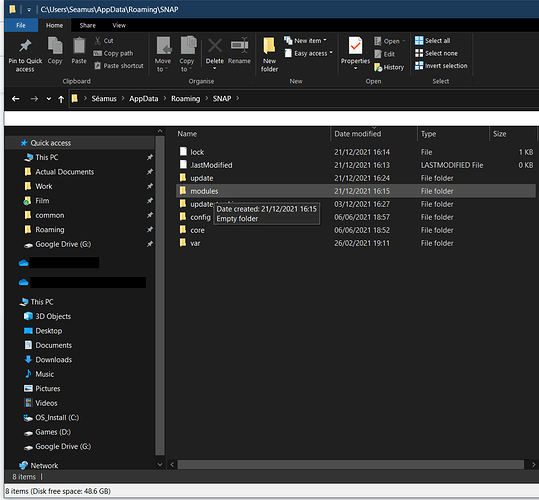 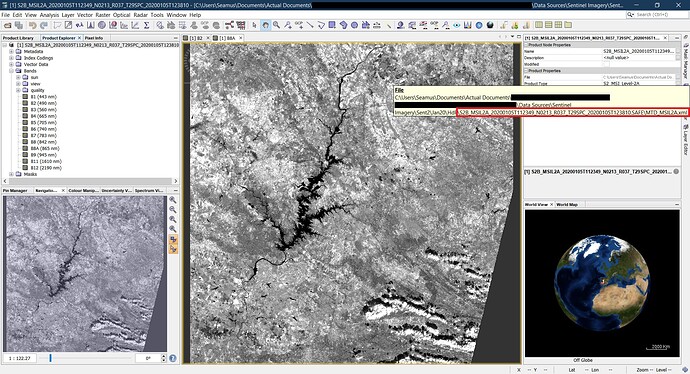 Initially I wasn’t sure how SNAP was still functioning without those files, but after I received a prompt to update them, I figured it out.

Somehow in the versions for plugins between 8.0.0 and 8.0.x (4/5/9 depending on the toolbox), something changed that meant for my particular installation it was bugging out. I was able to manually install the SEN-ET plug-ins as before and continue having the imagery loaded, so it doesn’t seem to be SEN-ET causing the problem on it’s own.

This isn’t a fix per-se as the SENET plugins will still fail to work (I’ve included the limited error log for clarity), but at least I’ve narrowed down the issue a bit and identified I have two separate issues that are both related to Java Heap Memory. Updating the SNAP-provided Toolbox plugins recreated the same issue as before where I could not load imagery, and SEN ET wouldn’t function.

I consider the matter closed since I’m going to do a fresh install now anyway, but if this suggests anything new to to problem, I thought it was worth mentioning.

I did a fresh install, and everything was fine right up until I installed the SEN-ET Bundles to continue analysing the data.

It’s obviously related to SEN ET specifically, possibly something to do with it require SNAP v7.0.0 whilst I am using SNAP v8.0.0.

Final Update
I was able to continue my processing as normal by downloading the earlier SNAP 7.0.0 on the official site (Previous Versions – STEP), and re-installing SEN-ET for that version.

As the .snap folder is technically shared by all versions, I’ll probably have to re-install SNAP 8.0.0 or later when I finish the project as I won’t need multiple versions running, but that solved both the ‘Waiting Thread Received Null Tile Error’, and my SEN-ET processing errors I briefly mentioned.

The SEN-ET Team has moved on from updating their plugin for later versions of SNAP (https://www.esa-sen4et.org/news7), so I’m marking this as the Solution for anyone who comes across this problem later.

Thank ESA and the SNAP Team for previous version backups!

It is very informative and helpful to me.