Why is CPU and GPU usage extremly low?

Hello, everyone! I was reading the “Command-Line InSAR Processing” turotial by Alex McVittie and trying to reproduce the workflow.:

image1099×296 38.2 KB
However, the processing bar was stuck at 46% for eight hours. Someone in the forum suggested that monster-graph is less memory-effecient than tiny-graph and may be the reason. So I splitted the graph and run the workflow before Interferogram node, as following: 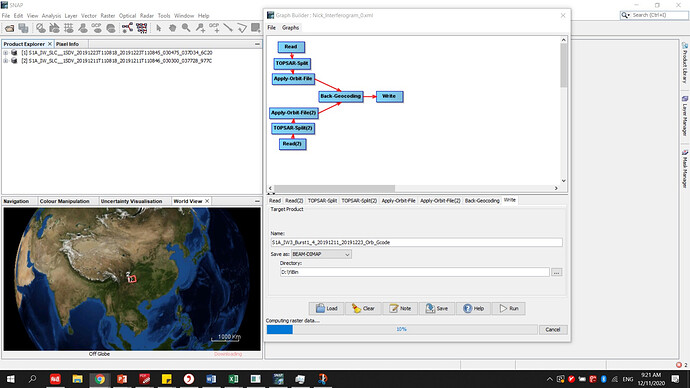 image1920×1080 266 KB
Again, the processing bar is stucked. What puzzles me most is the fact that the CPU and GPU usage is extremly low, indicating my pc is not working hard. Why could this happen? Thanks in advance for any hints. 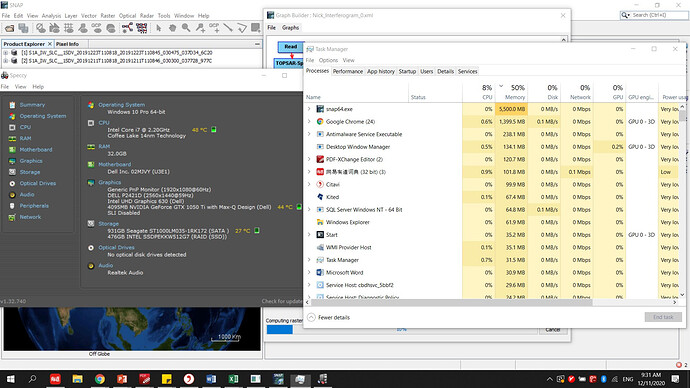 if you have 32GB you can increase the maximum RAM which is used by SNAP to probably 24 as described here: S2 export into tiff - NaturalRGB or Falso color infrared RGB

Thanks for your timely response, ABraun. I have found the solution in the post: Snap performance parameter

so changing the java settings solved your problem?

I have changed the parameters by clicking the compute button, which should get the optimal parameters to configure SNAP software. Sadly, the problem still exists. 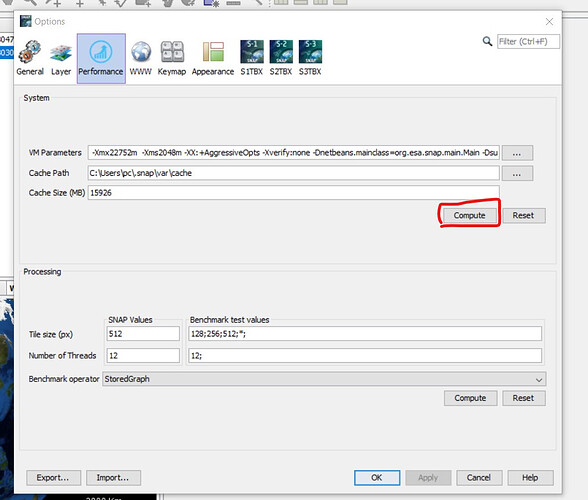 Dear ABraun. After reading posts related to this issue in the forum, I found that low usage of CPU and GPU is a known issue and @marpet mentioned in the post that some improvement would be made in next release. Right now, the workarounds I can image to speed up the processing are moving the files from mechanical hard disk to solid state disk, having better internet speed and configuering SNAP performance settings. I have tried all of these. Do you have any workarounds?

Dear @ABraun, I find the cause. It is the digital elevation model data that failed to automatically download in back-geocoding operation. Strangly, it kept silent without raising file-not-found error. Instead of use the built-in DEM in dropdown, I used external DEM which had been downloaded in local computer and then, task was done successfully. Hope my solution is helpful to someone.

the download of DEMs is currently a big problem since a couple of days. I hope we find a fix soon.

SRTM ZIP-files are corrupted or not found Problem Reports

Hi everybody! I am using the Graph Processing Tool (GPT) of SNAP on Linux to preprocess and subset Sentinel-1 images. This worked well until yesterday midnight. Suddenly there is a problem with new downloaded DEM SRTM auxdata. If the files exist from a processing job in the past for the given subset, everything works fine. If new files are required, SNAP downloads them automatically, but the downloaded ZIP-files are suddenly corrupted and GPT stays in an endless loop trying to unpack the new ZI…