Please, could you tell me exactly what is the x-axis in this histogram? 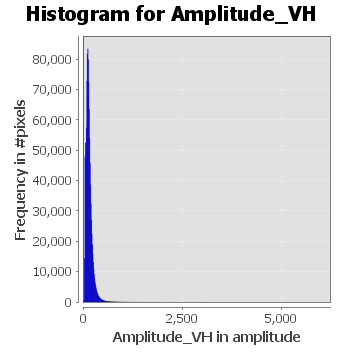 These are the values of the band you have selected to create the histogram for. So the x-axis is dependent on what you are doing. The y-axis gives the frequency (the count) of the values. Where several values are accounted in one bin. That’s how histograms are done.
Doing some research in the internet reveals great resources.

Synthetic-aperture radar (SAR) is a form of radar that is used to create two- or three-dimensional images of objects, such as landscapes. SAR uses the motion of the radar antenna over a target region to provide finer spatial resolution than conventional beam-scanning radars. SAR is typically mounted on a moving platform, such as an aircraft or spacecraft, and has its origins in an advanced form of side looking airborne radar (SLAR). The distance the SAR device travels over a target in the time ta... Interferometric synthetic aperture radar, abbreviated InSAR (or deprecated IfSAR), is a radar technique used in geodesy and remote sensing. This geodetic method uses two or more synthetic aperture radar (SAR) images to generate maps of surface deformation or digital elevation, using differences in the phase of the waves returning to the satellite or aircraft. The technique can potentially measure millimetre-scale changes in deformation over spans of days to years. It has applications for Synthe...

My problem is that I have always used histogram with gray level at the x-axis but now in SNAP I work not with a jpeg for example.

So is it correct to write in a document only that the x-axis rappresent values of the band?

that the x-axis rappresent values of the band

Yes, as there is no other source for the values. Or do you expect something else?

in this case values of band are not gray level but how could I define this values?

The amplitude is the measurement of SAR sensors.
Maybe this link clarifies it a bit.
http://elib.dlr.de/82313/1/SAR-Tutorial-March-2013.pdf