The ALOS-1 L1.5 images are already map projected (GRD), but are not terrain corrected (orthorectified).

All the SNAP tools in “Terrain Correction” or “Elipsoid Correction” do not work with the L1.5 images and give as error:
“Source product should not be map projected.”

So, how may we orthorectify those images using SNAP?

I did a “trick” that solved it:

that’s actually quite helpful - I saw many people struggling with the level 1.5 data. 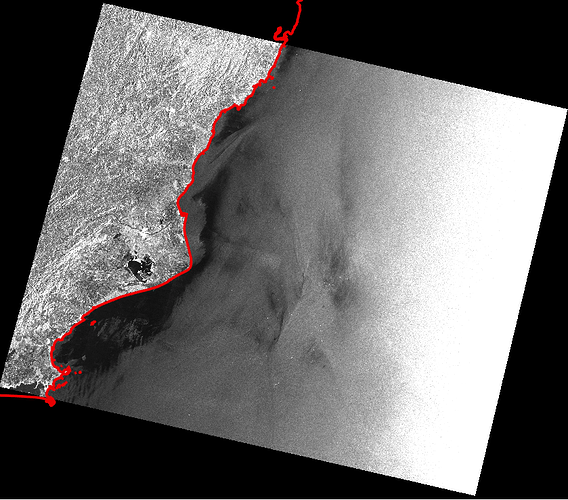 Can you explain the trick again? i’m runing problem with this process.

Instead of Terrain Correction or Ellipsoid Correction (which cannot be applied on Geocoded Products) just use Radar > Geometric > SAR Mosaic and add your layer as the only input. The result gets geocoded somehow.

This however only works if your image has no terrain induced distortions.

Thank you @ABraun tried it as you mention were teribble.
Tried it on ALOS-2 CEOS level 1.5 which i try to get more georefrenced.

you can try if ASF MapRady supports ALOS-2 already.
I used it sometimes to geocode ALOS PALSAR Level 1.5 images. However I think that the routines for ALOS-2 are different and I think remembering that it crashed when I tried it once.

But maybe you are more lucky.

The ‘SAR Mosaic’ does not perform the Terrain Correction.
It just project the data correctly on the ellipsoid.

It should be great if the next updates of S1TBX include the Terrain Correction for the ALOS L1.5 (GRD) images, since the GRD images of Sentinel1 are already supported.

The ‘SAR Mosaic’ does not perform the Terrain Correction.

I am aware of that but as you said - at least it gets geocoded and can be used in a GIS.

But I totally agree, it would be helpful if Level 1.5 data would be supported some day.

@ABraun & @gusortiz i agree with you, i hope this will get into the development list soon, i have seen this topic for a long time.

when you mean it’s good enough for GIS, what’s the accuracy have you ver check it maybe with a base map? i mean a far it is by distance for its real location?

when you mean it’s good enough for GIS, what’s the accuracy have you ver check it maybe with a base map? i mean a far it is by distance for its real location?

I’d say that depends on your application. If there is much foreshortening due to mountainous topography I coudn’t use it for geological mapping. But maybe for water body detection in the valleys it would be sufficient. A comparison with other spatial data (S2, basemap, OSM vectors…) should give a hint about the quality.

@lveci is it planned to have geometric coreection for ALOS-2 level 1.5 CEOS? although it is “geo refrenced” it is nor orthorectified.

this is partly answered here:

There are actually two kinds. 1.5 and 1.5G. The 1.5G is map projected and cannot be terrain corrected. It should be possible to reproject it. I’ll have to check if current error checking is to restrictive to allow it. All detected ALOS products from ASF that I’ve seen are 1.5G. I see some processed from Australia at level 1.5 which are just GRD but it’s missing SRGR coefficients so can’t be terrain corrected either.

not really it’s about ALOS product and not ALOS-2

Many thanks for your suggestions

you can do this in ASF MapReady
This open source software correctly handles Level 1.5 products and performs great with calibrating, terrain correcting (both geometrically and radiometrically) and geocoding your image.

Hi ABraun,
I installed ASF MapReady. I have backscatering images (sigma 0 hh, hv, vh, hh in db) after filter. I am trying to import those images to ASF MapReady, but it is not importing. I also tryed the original images ALOS 2, but the software says that is unable to import it (see the images bellow) . Does it work with ALOS 2? Maybe I did some mistake…
I did the sequence bellow and got the error . Many thanks in advance for your support. 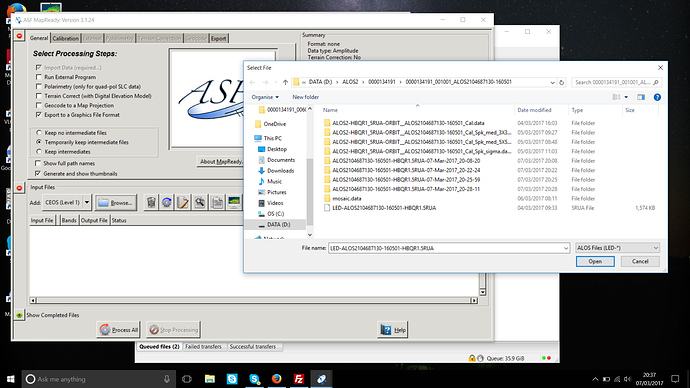 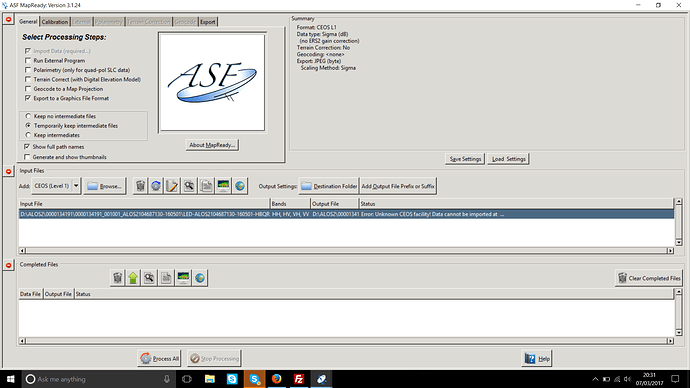 currently, ALOS-2 is not yet supported.