Hello i would like how to do this in SNAP? I have read this in one literature. And if you may, please explain the purpose of changing the spatial resolution and each corresponding steps to do it. Thank you.

It would help us if you gave us a link to the entire article. It is often hard to tell from only a couple of lines without further context.

what the authors describe is more or less the standard processing of Sentinel-1 SLC products. It is demonstrated in this tutorial: Sentinel-1 TOPS interferometry

The only thing they make different is that they multi-look the interferogram after debursting and that they do not include the calculation of coherence during the inteferogram generation, but do this after the multi-looking.

You can apply this under Radar > SAR Utilities > Multilooking
Increase the number of range looks to 2 and the number of azimuth looks will automatically adjust (mostly to 6, depending on the incidence angle). 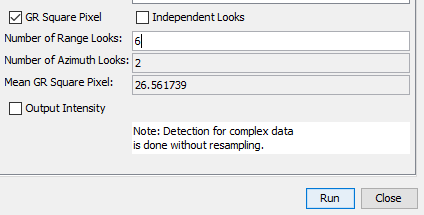 you can prevent the interferogram tool from adding the coherence automatically by un-checking this option:

The target product will then only contain phase. 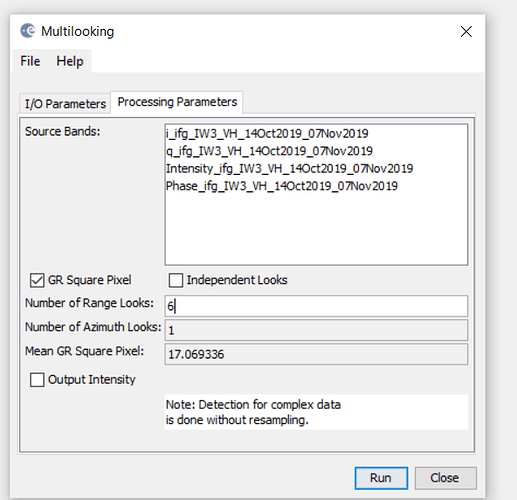 Hi, how can I adjust the azimuth looks to 2 so that i can have a 6x2 multilook? thank you

how could i know the optimum combination of azimuth and range looks that i should use for my image? thank you

Hi, how can I adjust the azimuth looks to 2 so that i can have a 6x2 multilook? thank you

the ratio of range/azimuth looks is calculated automatically so that you get square pixels. This depends on the incidece angle of your image and in most cases it is a good idea to follow the automatically calculated azimuth looks. If you insist on 6x2, you can check “independent looks” and manually enter both fields.

But usually, the suggested number is the most suitable. The data from the study you linked could have a different ground spacing so that 6x2 is ideal in their case.

hello! seems like, coherence estimation isn’t working. it shows the running window and suddenly disappear. what should i do? thank you, sir!

what did you select as input product?

the interferogram after i applied the multilook

the interferogram does no longer contain i+q of both input dates. I think you have to apply the multi-look on the coregistered stack again and calculate coherence separately.

does that mean the authors didn’t apply multilook in coherence estimation?

I think they did. They multi-looked the interferogram to 30x40 meters but they did the same to the stack to be able to apply a window size of 5x5 pixels for the coherence estimation.

im still lost in this part

@qglaude that is another possibility, yes

The difference is that the coherence is calculated based on nearly quadratic pixels and a regular kernel instead of a rectangular one.

The difference is that the coherence is calculated based on nearly quadratic pixels and a regular kernel instead of a rectangular one.

Wouldn’t it bias the coherence ? In my case, coherence is computed before increasing SNR (by multilook). In your case, you increase the quality of the signal then compute coherence. Not saying I’m right or you’re wrong, but I have the feeling that it would produce different coherence results

I fully agree with you. I haven’t heard of such an approach before as well, but as it is written in the paper, it sounds more like they wanted to have the square pixels and a more “polished” coherence image.
But maybe you are right and they just applied a filter on the initial coherence.

Would be interesting to see the reviewer’s comments on this.