I am initiating this post to ask about basic steps in creating a subsidence map from numerus consecutive interferometric steps.
I have followed the information in here (and every other thread I could find):

I work with ALOS-2 PALSAR images:
What would be the best pol for interferograms? HH or VV
Should the original product be calibrated or not?
Should I apply any speckle filtering/ and at which stage?

In my understanding I have to:

Here follows a small snip-shot of the first flattened interferogram 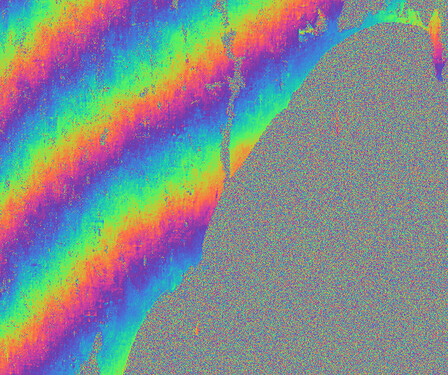 The bottom right area corresponds to sea, so I would expect such phase behavior.
The top left area is the actual land and the fridges appear as such, and I have no idea if they seem “good” or not. This behavior of the fringes on the land area is general to the whole scene. As you can imagine the following steps follow this “origin” behavior.

Bellow I present 4 images of the full process on a small land subset:
with InSAR Stack Overview: 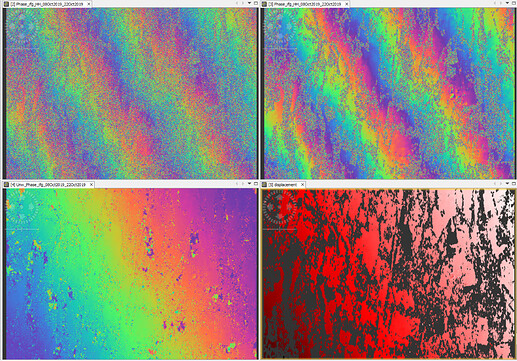 I have displayed the displacement map in gradient color red to show that the displacement itself follows a gradient like behavior (displacement [-0.18m, 0.26m]) from one edge of the image to the other. It is not assured that in that particular patch I expect to find some subsidence, but still I do not knot how to assess these results.

Any inputs would be much appreciated!
Thank you all in advance

the interferogram seems to be affected by ionospheric effects. We discussed this in here, please have a look at the solution proposed by mdelgado: Interferogram from Alos palsar 1.1 data

Thank you for your reply, it was a big read the last post.
I did what is mentioned there with the parameters and I got rid of those slow varying waves of the interferograms. (by increasing the flat earth orbit degree)
I also did that with DEM assisted coregistration, which resulted in non varying waves in phase.

Below is the parameters used for the interferogram: 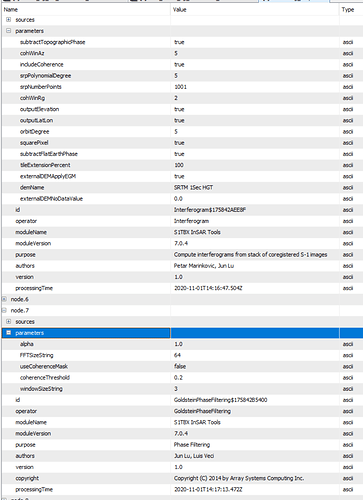 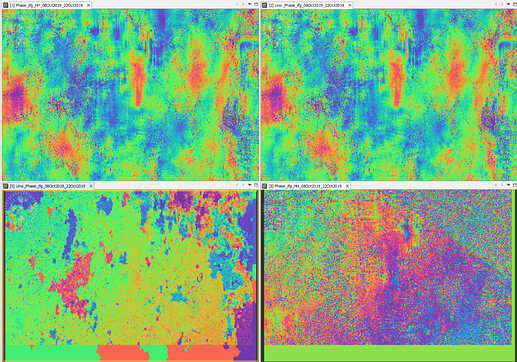 I have also translated them into displacement, as you can see bolow:

The low coherence on the right makes me unease with DEM-Assisted cor.
(How am I supposed to evaluate this based on: (Interferogram from Alos palsar 1.1 data) ?)

At the end though, how am I to be sure to extract the ionospheric effect so that the remainder is the actual subsidence?

I’d say this is a good sign, because short temporal baselines will not result in interferograms with massive fringes, especially when the topographic phase was removed. So these look quite nice actually - good job!

[EDIT]: Also, how to interpret the fact that with the Stack Cor. the wrapped and unwrapped phases were very similar? (top row of figure one)

why should the interferogram look like the elevation band?
According you your screenshot, you selected to remove topographic phase, so any pattern which remains is no longer related to the underlying topography.

Thank you for your reply!
now I got a better idea how to assess the coregistration. 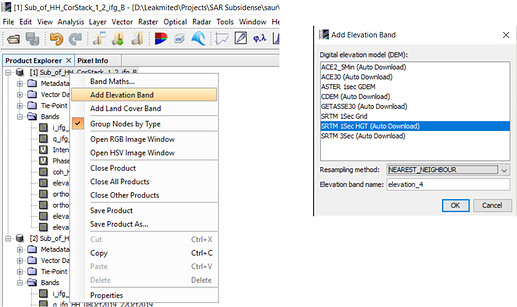 Hence I have 2 elevation bands for the same product!
here follows the 2 elevations bands:

On the left we have the elevation_add while in the middle we have elevation_ifg. Comparing these two it seems that the elevation_ifg is shifted to the left by almost 500m.
The elevation band on the right has been created in the same manner as elevation_ifg but with using the default coregistration/interferogram parameters and it seems totally off. Presumably due to bad coregistration or bad topographic phase removal. I thought to present it here just for display and comparison purposes. i will disregard it from further processing.

Next, I thought to orthorectify the product, along with its two elevation bands, to see if any of both would match the topography of the scene. Of course, I also saved the output band DEM during range doppler t.c., lets call this one elevation_DEM. Below you can see these images: 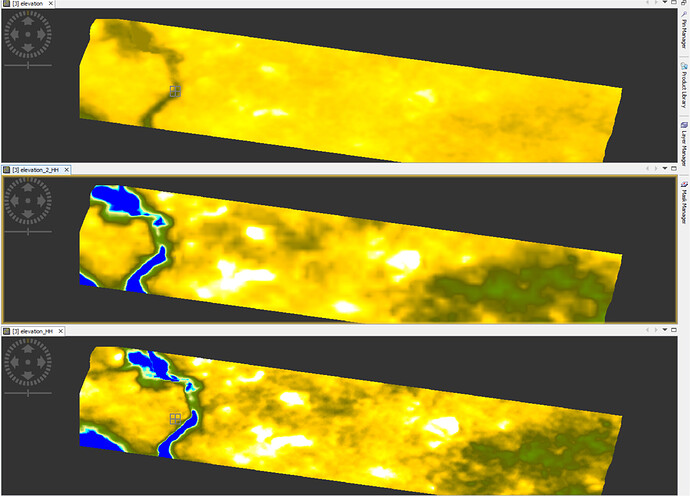 image2167×1559 408 KB
On the top: Elevation_DEM. Google projection suggested that this band matches the ground very good, so we will keep this as reference.
Middle: Elevation_add
Bottom: Elevation_ifg
It is observed that both elevations_ add/ifg do not match very good the DEM one. They are both adjacent to it, with a shift of about 200 or 300 meters each. This is apparent by looking at the cross symbol that apparently is placed at exactly the same spot in all displayed images.

-What to make of this?
-Since I get such a big shift between elevation_add and elevation_ifg, and since both of the them are not well placed on earth, can I really trust the end results of the coregistration and interferogram generation, and after all the end-displacement map? 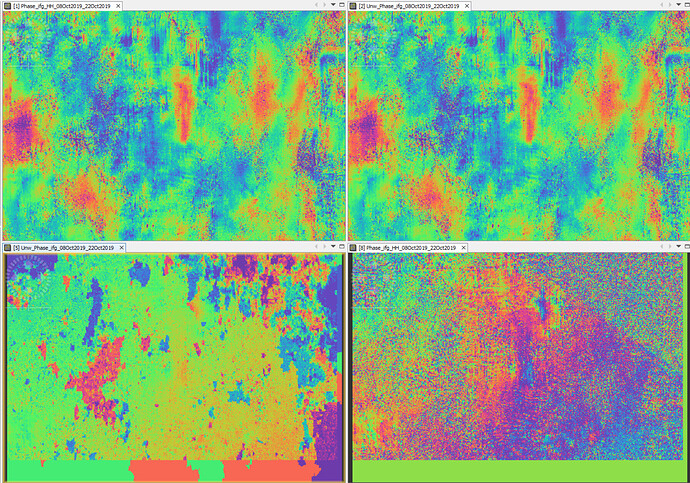 So I can see if SMOOTH will resolve this issue? and to understand what jumps are

aah I see! not this is the bad interferogram, that I will not use, derived from DEM-Assisted coregistration and low degree polynomial order in interferogram creation.

You are right, here follows the same image as before, with the same color coding of the elevation DEM 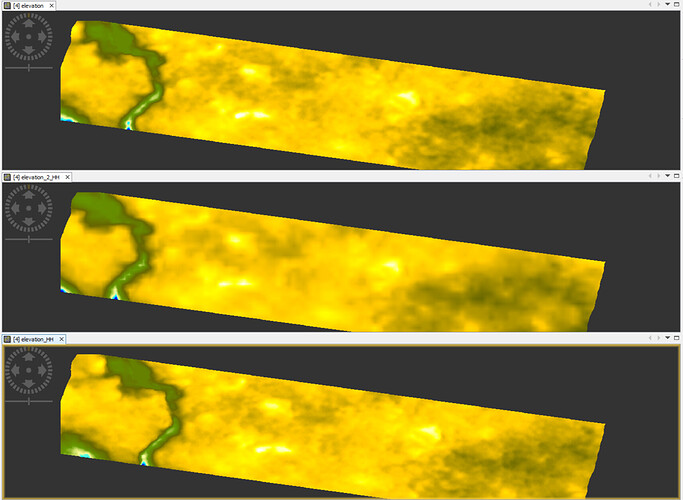 Now they are! in the previous post,
So, any ideas what to make of it?
Would that make the end displacement map not-trustworthy?

that looks better. Indeed, smaller differences of the used DEM can occur depending on the resampling and pixel size of the inputs. So the variations you see here are totally okay, because the main pattern of displacement will still be derived from the phase difference of the two input products. Topographic phase is just removed to prevent unwrapping errors, so it does not harm if it is differently estimated for the inputs.

OK I see! So after all I can trust the end result? -Would I have to apply any shift to the end result so as to make it match its true ground position considering the elevation_DEM?

I will play a little with the interferogram parameters and post the results again to discuss them, so I can understand how to evaluate them

you can check if there are preprocessed interferograms of your area in this portal: https://comet.nerc.ac.uk/COMET-LiCS-portal/

They are a good reference regarding how good ones look like. Click on a tile, then “Link” then “interferograms” and select a date. There are png files for comparison.
The differences regarding the DEM do not cause shifts, but you have to level all displacements at one stable point. We had a discussion on this here: Different results in the study of land subsidence using the Sentinel-1 satellite image

Sadly there are no available ifgs for my study area, in that site. 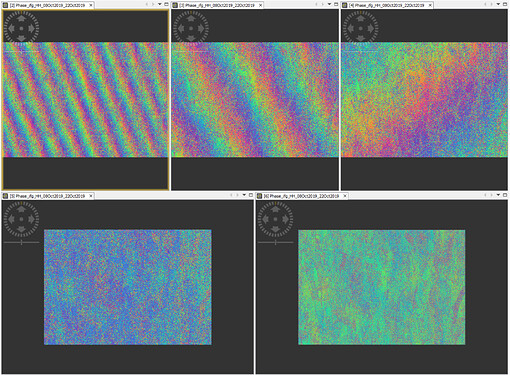 I have also tried these combinations with varying Polynomial degree from 2 to 8 taking even number, resulting in highly similar ifgs (if not identical).

By the looks of 4 and 5 it seems that the ionospheric effect is eliminated.
-Is it true?

I then chose to proceed with 4, so as not to take the extreme values of combinations.
Then i performed the goldstein filtering and phase unwrapping as shown:

I am impressed on how similar these two are.
i do not know if that is expected.

Next follows the displacement map, based on the unw/ ifg.:

What do you think of the process so far?
Am I lead astray by seemingly “good” results? or are they actually useful results?

The differences regarding the DEM do not cause shifts, but you have to level all displacements at one stable point. We had a discussion on this here: Different results in the study of land subsidence using the Sentinel-1 satellite image

I think I got what you said here, i will take this to the big scale. I will also take two consecutive pair this time, based on the approach mentioned above. Subtract the relative difference and see what happens.
I am thinking of using the Polynomial Degree 5 and Orbit Degree 4 combination as being the closest match to the default values of snap, while eliminating those slow varying waves.

After all, i would see no relative displacement in rivers and in urban like areas, right?
just trying to imagine how to assess the end result

PS. Do you think it would be best to coregister non-calibrated products?

Can’t tell which areas are suitable as stable reference point. Once you identified one, make sure it’s value is zero in all pairs for best comparability.

I mean Radiometric Calibration (or even Speckle filtering).
So far I have been using non-processed products