Okay. One more query, during the filtering phase I used the coherence mask. So do I have to do it again? Using band maths?

yes, it doesn’t erase the pixesl permanently. It just excludes them from the view, but it helps to interpret the interferogram.

I understand. But I am not being able to do the coherence mask. After going through with the equations, when the mask is done, very few places are being masked. Nothing major. So is there something wrong?

what is your threshold?
How does the initial interferogram look like?

I used 0.3 as my threshold. The interferogram is not distinguishable at first with a particular pattern. But a pattern can be seen after unwrapping the image. 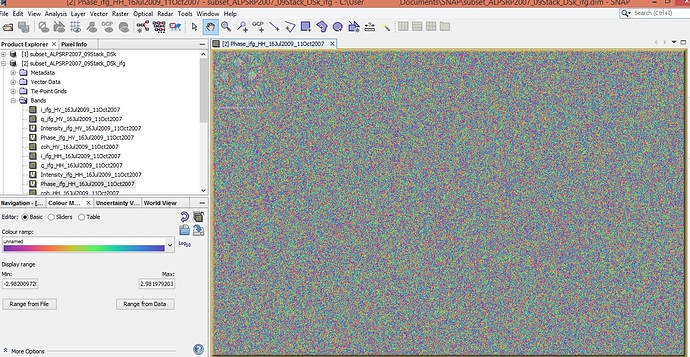 hmm, October 2007 to July 2009 is quite long.
Can you show an RGB image of the two intensitiy layers coregistered stack? 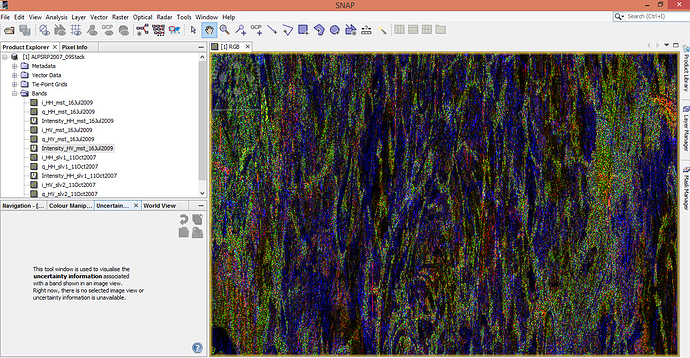 But then I read an article where a one year time span was used. So I thought of trying it out. In my case, the present problem is that shorter time intervals are not uniformly available for the area under concern. At times the interval is almost around a year, since either the 1.1 complex is not available or the beam mode changes to FBS, while at other instances the interval is only of 2-4 months! But I have downloaded a few more pairs of FBD mode which have more or less a uniform interval. I am working on them and it will take a long time. Once they are over I will inform you.

In the meanwhile I thank you for your useful advice.

your image doesn’t look like the coregistration was sucessful. Can you make one just with HH of both dates?
This would explain why there are no fringes in your interferogram.

Okay. I’ll give it a try. But I found a pair more closer to each other according to the time scale. Will that do? it is from July to October 2007. 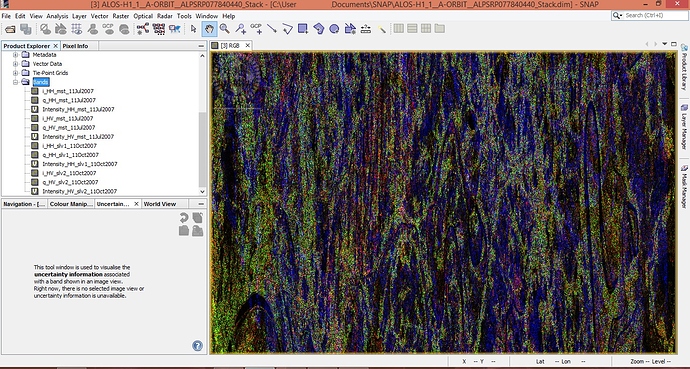 The coregistration process is almost automatic, once the correct options are chosen. Of course I chose cubic convolution 6 points as the interpolation method. Should I choose something else then?

Should I change this the way you asked in the post above? Only with the HH ones?

Yes. First image is red, second image is green. No blue. It is important to check that both images are perfectly aligned. Based on your previous images I’m not sure about that.

I understand. Well, there is a portion to the left which is missing in one imagery. Mostly towards the extreme left. Other than that this is the coregistered stack, in RGB with only two HH imageries of the two dates without any selected in the blue section. Please tell me how to go about the whole thing correctly. I have been trying every possible way to go about this job of mine 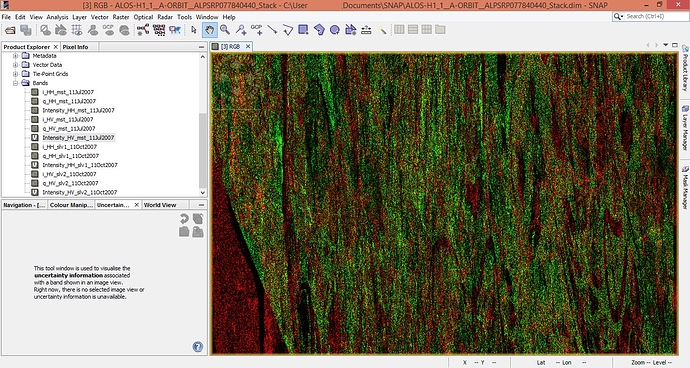 that doesn’t look correct.
Go back to the co-registering step and increase the number of GCPs to 3000 or 4000, activate the coarse coregistration and reduce the GCP tolerance to 0.2.

If this doesn’t bring a better result, try the DEM based coregistration instead.

Thank you so much. I’m trying this. Once I’m done with it I shall inform you immediately.

Thank you for your suggestions @ABraun. I tried them on a pair of imagery. This one is with coarse registration activated, 4000 GCPs. 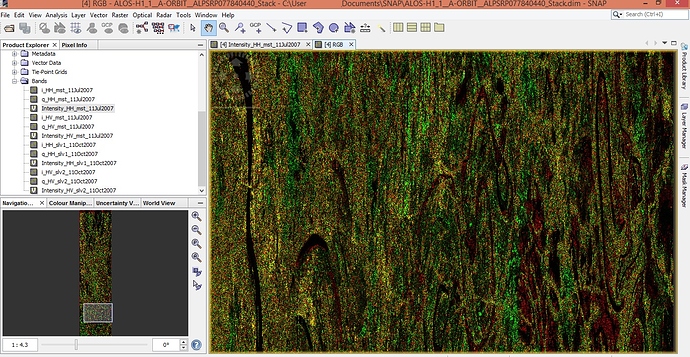 Depending on the area, you can get reasonable coherence with L-band data like ALOS with a two-year interval. The other big consideration is the baseline. They allowed the ALOS satellite to drift by more than 5 km over the first two years of operations, and then did a big orbital maneuver to move it back to the starting point in June-July 2008. This often means that two-year pairs from 2007 to 2009 have short baselines, while 1.5 year pairs from early 2007 to middle of 2008 have very long baselines.

I don’t know about SNAP, but other software packages can form interferograms between ALOS FBS and FBD scenes.

your coregistration now looks better, even when there are still some strange patterns. But maybe the river is changing rapidly. I’d give the interferogram computation a try. You should see at least some patterns.

But if you are in a tropical area, there is little chance for successful interferometry due to decorrelation at the canopy.

Thank you for your advice @ABraun. I have been co-registering the rest of the pairs and I shall be trying the interferometric process now. Once a pair is complete I’ll send you a screenshot.

Well, the place does have a few areas where scattered trees are available but will that affect the interferometry? There are also some urban patches here and there.

But no matter what happens I shall surely inform you once the job is done.

Thank you for your suggestion @EJFielding. I was a bit taken aback when I saw the irregularity in the image acquisitions. That is why I was unable to decide which images to choose for my job. But you see I have tried many softwares including ERDAS and SNAP for this end, but to no avail. Of course I’m a bit more comfortable with SNAP but I would like to try out an alternate software package as you mentioned, if FBS and FBD images can be combined. I would then compare the end products and ultimately choose the most suitable one.

It would be immensely helpful to me if you could kindly indicate which software package to use for my purpose.

Two InSAR packages that I know can handle ALOS FBS and FBD cross-interferograms are GMTSAR and the InSAR Scientific Computing Environment (ISCE). Both are pure command-line packages that only work on Linux or other Unix-type operating systems, including Mac OSX.

Thank you, for your response @EJFielding. I’ve tried to avail the first and second packages in the Virtual ware but both are pretty time consuming. Of course I would like to compare the end products of SNAP with ISCE too. Could you please direct me to the appropriate tutorials for my purpose?