I am struggling with the coregistration of images from ascending and descending orbits (coregister an ascending with a descending image) . I am working with Sentinel 1 GRD data. My work flow is as follows: (1) Perform Slice Assembly, in order to get the whole Scene (Beijing). (2) Apply precise orbit files. (3) Apply terrain correction. (4) Coregister with another image. Now I have experienced that the automatic coregistration tool works fine if one one wants to coregister images from the same orbit (Descending OR Ascending), but not if they have different orbits. I tried to change several parameter, including the Initial Offset method (from Orbit to Geolocation), reduce the number of GCPs. The resulting coregistration provides insufficient offsets (40-50 meter !).
I also tried to use the collocation tool; this also did not work. What am I doing wrong, or what is the recommended workflow for coregistration in SNAP with Sentinel 1 GRD data? I work in Windows 7.
Thank you for your help!

P.S.: I am aware that there was one chat group discussing this issue already (~December 2015). But no solution provided there helped me.

Coming up in the next release there is DEM-Assisted Coregistration (this is a generalized backgeocoding) which can provide a geometry only coregistration. This will help for your case and also for cases where there is movement in the scene.

In you steps, apply the orbits before slice assembly just to be safe. Then, coregister and select a resampling method in Create Stack. This will resample the images first based on its geolocation for the coarse registration. If you are working with InSAR, this is generally not recommended but with GRD it’s fine.

In general one should only coregister images from the same orbit track, which rules out ascending-descending pairs. try terrain correcting the images first.

For collocating different orbitpaths you probably need a defined raster in your CRS (Coordinate reference system, map projection). If using UTM zone 50N for your area should be appropriate.

With this the corregistration/collocating will be referenced by the provided coordinates of your acquisitions and use the defined raster as master.

For creating a “dummy” raster, QGIS or ArcMap (SagaGIS) should do just fine.

P. S.: I dare say something similar could be implemented by the DEM-Assisted Coregistration mentioned by Iveci, only the master scene and CRS will be the one of the DEM.

Thanks everyone for your answer,

@Iveci: I noticed that that tool already existed in a previous version. I am looking forward to the new and better version.

@mengdahl: In theory it makes sense to combine images gathered in ascending and descending orbits, since they provide information from different angles. I terrain corrected them.

I used UTM 50N already. With both tools it still did not work.

I used ENVI in the meant time and performed a manual coregistration. However, there is something importand to note: the images overlap worse or better depending on the location (propably because of the different relief displacement). This means one can not use a first order polynomial approach. I used a Delaunay based coregistration, which worked fine for me. I used approximately 70 GCP for the area in Beijing (10000x10000 pixel).

I found out how one can coregister S1 images, no mater which orbit is present:

(1) Take a S2 image from the same scene. Make sure that it just contains bands 2,3&4 and the data format should be preferably dim (tiff should work too)
(2) Select all the S1 images (orbitfile applied + terrain corrected).
(3)Offset method: Geolocation (NOT ORBIT !!)
(4) extend: Master
(5) Now there is a important thing to note about the coregistration of S1 images from 2 different orbits: there are local disturbances, which means that in some areas it might be easiers to find GCPs and in some not. This gets especially problematic if the study area is big (e.g. 14000*14000 pixel). Therefore: Set GCP tolerance and RMS treshold to 1.0 and Warp polynomial to 2 or 3

For me, this worked fine. This is done with the automatic coregistration tool in snap 2.0.2

In theory it makes sense to combine images gathered in ascending and descending orbits, since they provide information from different angles. I terrain corrected them…

Yes exactly, if you want to combine ascending and descending SAR images you should do it via terrain correction, and not by trying to co-register the images.

only the terrain correction will not provide you the sufficient coregistration. Terrain corrected S1 products do not overlay perfectly (scroll in and take a look). There is a offset of ~ 4-15 pixel (depending on the location). This kind of offset makes it unsuitable for applications like change detection, or in general, analysis of time series, which requires a (sub) pixel accuracy. So, a proper co-registration is definitely needed in SNAP (I really hope the new DEM assisted coregistration can do that).

Hi Marvin,
Please consider to update the orbits of S1 GRD products, potentially calibrate and then apply Range-Doppler Terrain Correct. Ones this is done you can simply stack the products using “Create Stack” tool (in Co-registration) using “Product Geolocation” in the Initial Offset Method option.
This gives good results for both asc & desc data.
Another option would be to apply a DEM-assisted co-registration and then TC the outputs.

I did exactly what you described already but it does not work for me (not without a S2 image as master… see my post above). I also adjusted the RMS values for the GCPs but no coregistration could be performed. But I want to add that the solutions which are scored still result in a 4 pixel offshift, depending on 2 things: the location and the size of the scene.

Thanks for the hint with the DEM-assisted coregistration.

Can you please send me the filenames of two S1 GRD products for which you have this residual shift?

I applied precise orbits to the products above and ran the Dem Assisted Coregistration with default parameters. The result looks ok and I cannot see any shift on the roads, tracks or airport.

This is an RGB with mst VV for red and slv VV for green. Yellow should indicate no change. 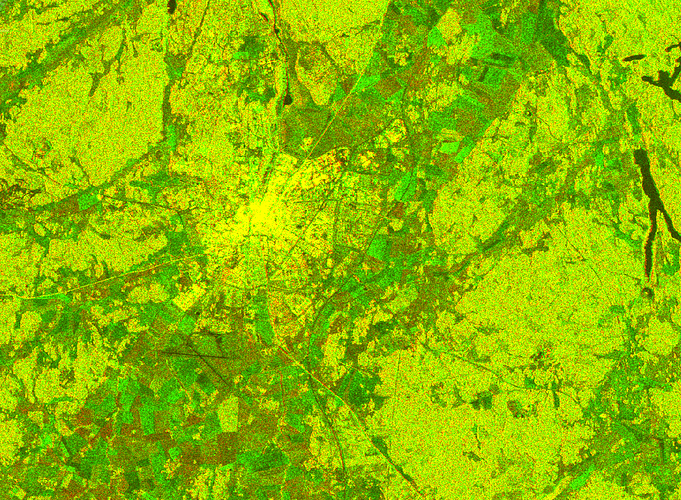 thank you very much for the help. The new DEM assisted coregistration is a feature I wanted to try out today. I agree, your result looks okay, I can see some differences at the shorelines, but the important features seem not to shift. Is it possible to add a sentinel 2 image to the S1 images for the coregistration?

Dear All expert in the processing SAR image

I want see movement from amplitude GRD S1. How to determine movement in cm (or meter) and how to make it colorful. 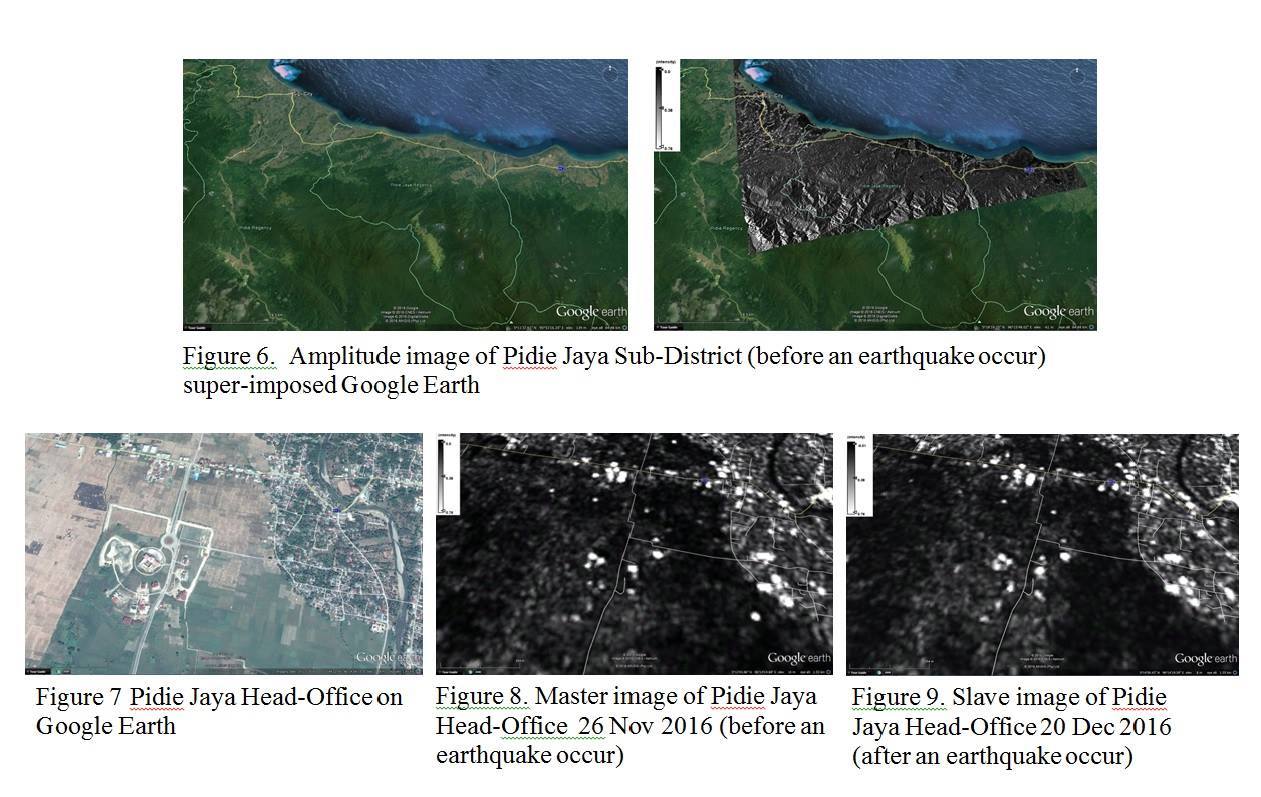 In the GRDs I doubt you will be able to see much ground movement. You could see change from building collapse but even then it may look similar. You could try precise orbits, dem assisted coregistration and then offset tracking.

I am trying to co-register two S1 GRD images using the DEM-Assisted Coregistration. I want to do that using two different DEMs, i) SRTM 1 arc sec (downloaded directly from SNAP) and ii) an external DEM of 5m GSD.

I have followed the workflow that you suggested,

I have not found problems when using SRTM, but unfortunatelly, when I try to use my external DEM of 5m, a lot of problems appears:

I also have tryed to coregister different subsets of the two images instead of whole the image… but nothing!

I do not know what else can I do in order to obtain the results.

If you have images from the same orbit track their geometr is identical and you can coregister them with Create Stack. If you have different gemetry due to differing track and/or ascending/descending scenes you should terrain correct them separately and then stack the end-results. Search this forum the issue has been discussed several times in the past.