I even handled DInSAR and Unwrapping as in the tutorial. I did it through the following steps.

However, the coherence is not good, and the phase is also broken a lot.

I have tried adjusting the window size of various Multilook scales and Goldshtein Phase Filtering, but the quality is not improving.

I tried the coherence mask, but the quality still doesn’t improve.

Is there any way to increase the quality of the interferogram by other methods other than the above method?

The area I am trying to deal with has a lot of aftershocks, so the stack cannot be applied.

Can you please post screenshots of the interferogram? Some artefacts can be tackled by adjusting parameters or settings, but in case of low coherence, there’s little you can do on the processing side.

What’s the temporal baseline of your pair?

Thank you for your answer.
The temporal baseline is 12 days, and the terrain next to the fringe where all the coherences are broken is the lake. 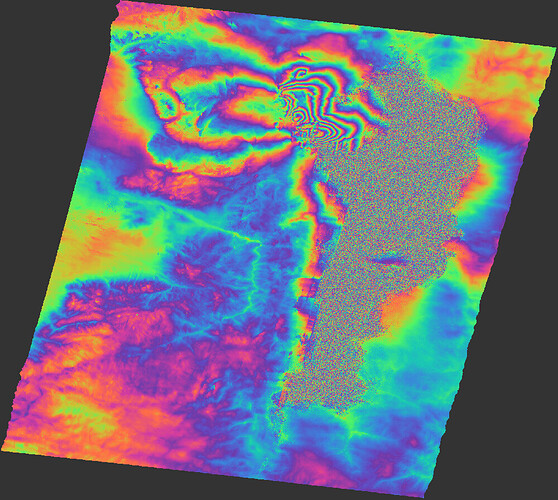 I am currently studying a modeling program based on InSAR images.

The areas where the coherence is broken leads to modeling inaccuracies.

In the case of the lake phase, it was possible to process the modeling by masking with an equation using elevation in bandmath.

However, in addition to the lake area, the area where fringe breaks in the middle of the fringe was interpreted as the slip surface of the fault.

the quality of the interferogram seems good in general.

The artefacts at the western border of the lake can probably be tackled by reducing Sigma to 0.6 during the Goldstein filtering.

The rest depends on how the modeling program deals with low cohernce areas. As you say, coherence will remain low over the lake no matter how you preprocess the data. Maybe the modeling software itself allows masking of such areas?

Sorry for my belated reply 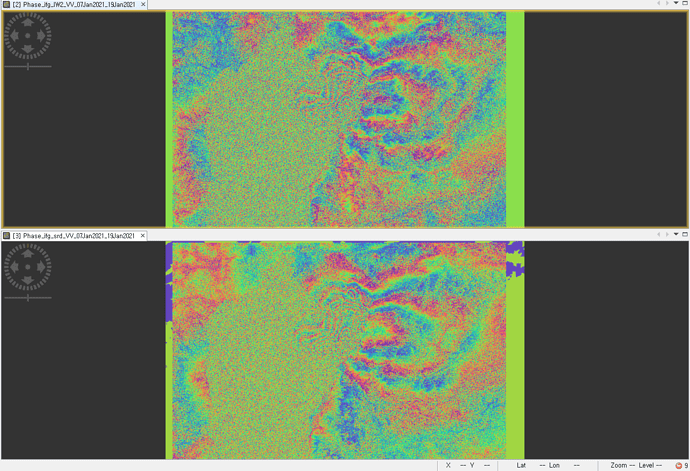 where do you mean the central valley? 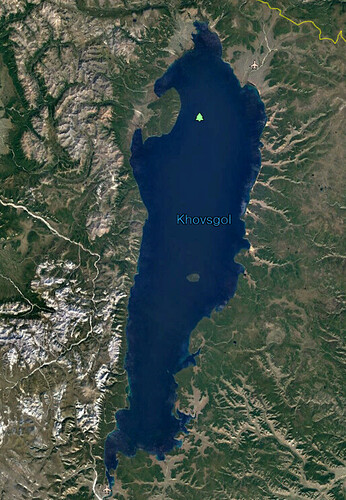 Even though I applied that method, it still doesn’t work.

yes, sorry for being imprecise. 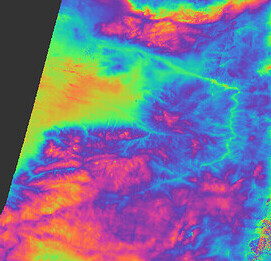 I am unable to get that can we use SRTM 1sec data for India and Nepal?

These areas are actually covered by SRTM.
Which have you selected so far? Please make sure that you have installed the latest update and also select SRTM 1Sec HGT (AutoDownload) during the topographic phase removal in the interferogram formation.

When you select “Output Elevation” you can check the quality of the downloaded DEM afterwards. 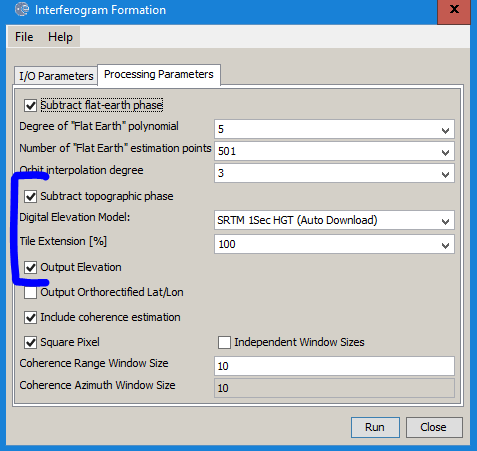 Hi!
It took a long time to process the data. 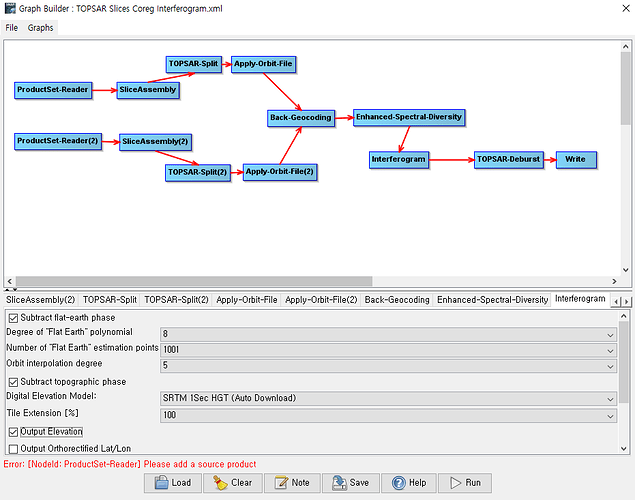 The topography phase and elevation are as follows. 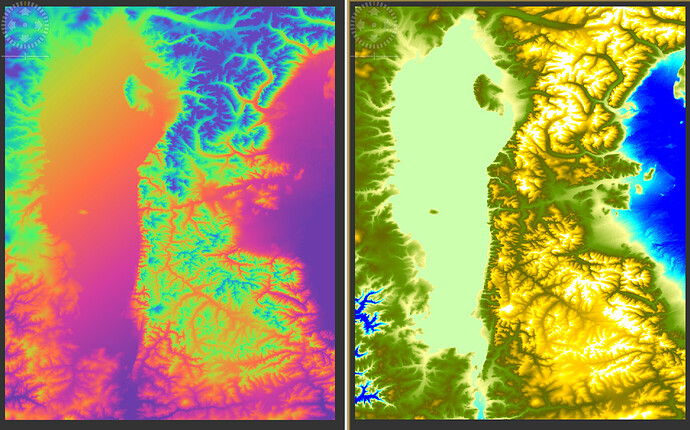 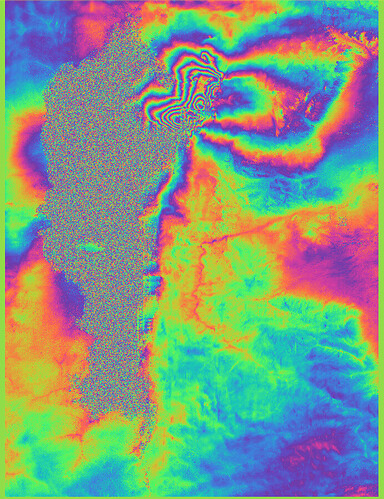 I set sigma to 0.6 and processed it.
However, the area caused by artifacts is still not getting better.

At least the topographic phase removal works according to your screenshots. Maybe the phase changes too quickly over these areas?

You can try if a data pair from another looking detection has less artefacts here.

I don’t recommend graphs, they often take longer than processing the steps iindividually and do not allow to check for errors along the processing chain.

There is only a descending path for the Sentinel-1 data pair that I can get.
And that’s the image above.
Thanks for your advice! 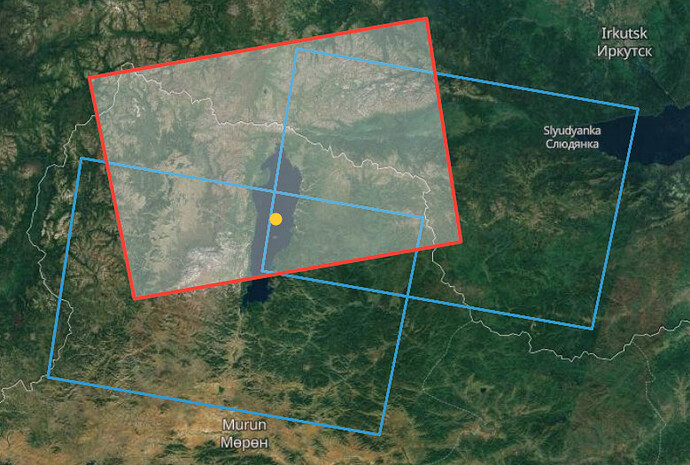 Its ascending path does not support coseismic period images.

In my opinion, I am not totally sure, it’s not a problem with artifacts, but a broken phase for the fault rupture zone.

I need to think more about how to quantitatively mask that area.

The rupture causes a phase-incontinuity of course, since the ground can move multiple wavelenghts and even meters compared to the other side of the rupture.

I would like to remove the fault rupture area quantitatively as shown in the figure below.

I’ve read several thesis, but it doesn’t show how to remove it.

In this thesis, it seems that the Interferogram was extracted using GAMMA.

Is there a way to remove the fault rupture area as shown in the picture below?

Whether I use SNAP or not

When I process, the masked image using coherence and elevation is as follows.

In addition to the fault rupture region, the fringe region for research also has a problem that the value disappears. 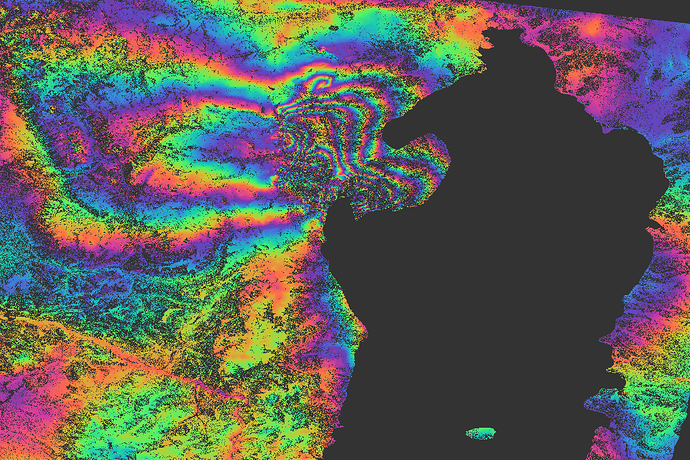 Can’t I have any other ideas?

Hi dears,
After do interferogram “phase_ifg_IW3_VV_…” file of bands when open image window to be almost full dark scene and somewhere can see just few colorful pixel on display.
Someone please explain to me what is wrong did? 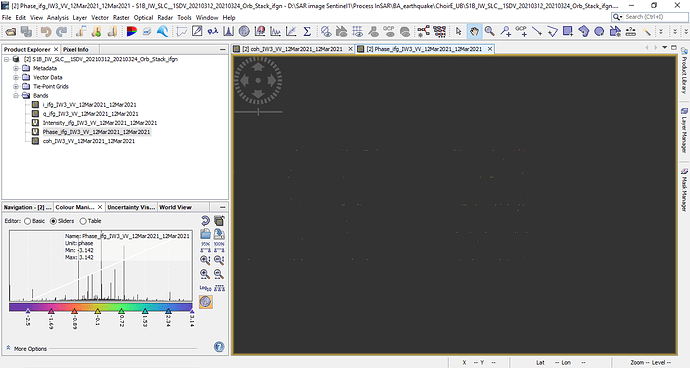 could it be that the coregistration failed?
For Sentinel-1, you first apply BackGeocoding, visually check its quality, then proceed with Enhanced Spectral Diversity. Only if these two have produced a proper result, you can proceed with interferogram generation. Does the coherence look the same? 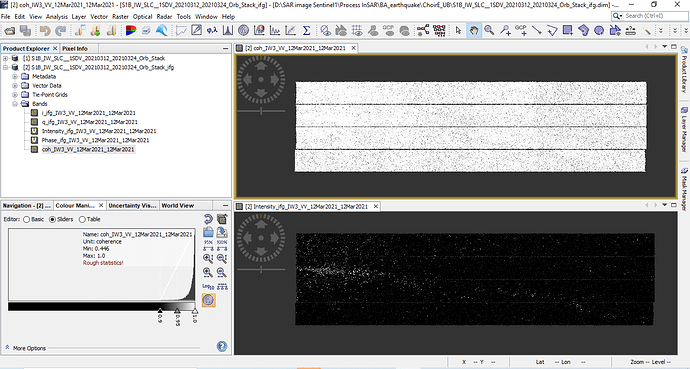 According to your screenshot both images are from the same date. This will not work, please check the input data.