A quick search found this:

Can I coregister my intensity images and save the Look-up table (LUT) in SNAP? I could then apply this LUT to the unwrapped phases for their coregistration.

It would be good but sadly it’s not possible at the moment.

alright, thank you for the quick answer.

It would be good but sadly it’s not possible at the moment.

do you have an idea how i could co-register unwrapped interferograms in SNAP?

If they were coregistered to the same master initially then you could use merge or create stack. If they all have different masters then you may need to terrain correct and then create stack. Depending on how accurate the geolocation is you could also create stack with resampling but, be careful this doesn’t ruin the phase.

The safest way would be to coregister all of the products first but currently you can’t do different combinations of interferograms. We’ll be adding this functionality next to allow selecting the interferogram pairs based on a baseline plot. It would be helpful to hear your use case so we have can make sure it’s covered.

thanks for the suggestions.

I initially wanted to average different interferograms of a InSAR stack.
Master-Slave1
Slave1-Slave2
Slave2-Slave3
and so on.

What you suggest would be great, namely that different product pairss in the stack could be used.

Each of the interferograms could be unwrapped in SNAPHU but the SNAPHU import woudn’t allow to re-integrate them into the original stack - or is this possible?
Edit: I just tried it and it works - great!

Hi ABraun,
I have a similar problem with the post of yours in terms of interferogram averaging and I would like some suggestions because I am still confused.

I have crated an interferogram (for the period between March of 2016 and March of 2017) to find a potential subsidence for my area of interest but it suffers from decorellation and some artifacts due to the atmosphere. So, I downloaded 10 SLC SENTINEL1 images and I am about to produce a series of interferograms and average them out so I can hopefully increase the coherence in the area and reduce the atmospheric effect.

I am thinking of two ways of producing the interferograms and doing the averaging but I do not know which method is the
optimal one.

In the first method, we have one master and the other images are slaves and in the second method we have different master images.
So, my question is, which method is the ‘best’ or the most preferable one?

@ABraun , you mentioned in your post above that only the method of one master and mane slaves is possible in SNAP. So, the method with different master images does not work ?

I personally would prefer this approach. You have higher chances of reliable results and still are able to merge the results afterwards (e.g. 1-2 + 2-3).
But it is currently not featured in SNAP yet. You can do it manually however with the TOPS coregistration and the graph builder afterwards.
Currently, you need to terrain correct the unwrapped interferograms to have them stacked afterwards for averaging purposes. I am working on a similar topic at the moment (yet nothing to present) and would be interested if you receive good results.

Thanks for your quick answer.
I will try this approach and see what I will get. I will post the results on the forum (if they are any good :p)

Did you get any new forward step in this processing?

Didn’t undertake anything in this direction, sorry.

Thank you, no problem

Is there a chance to make interferograms out of slave products in a stack?
I made a stack with 1 master and 12 slaves and then made image pairs
master-slave1
slave1-slave2
slave2-slave3
…

But the interferogram operator doesn’t work for the slave-pairs, it generates no output. I tried to rename one of them mst istead of slv08 for instance but this also didn’t bring any change.

I would like to make interferograms of short temporal baselines which are are alreay in the same geometry.

Is there a chance to make interferograms out of slave products in a stack?
I made a stack with 1 master and 12 slaves and then made image pairs
master-slave1
slave1-slave2
slave2-slave3
…

But the interferogram operator doesn’t work for the slave-pairs, it generates no output. I tried to rename one of them mst istead of slv08 for instance but this also didn’t bring any change.

I would like to make interferograms of short temporal baselines which are are alreay in the same geometry.

This is something that SNAP does not yet support, but it is a high-priority development in the near future. @mfitrzyk

that would be very nice.
So there is also no workaround at the moment? I tried to split the stack and then stack image pairs manually but they don’t seem to be recognized as an input for the interferogram generation after that.

Is there a way to select an ideal master of many Sentinel-1 SLC scenes for a (one master) stack? The Coregistration overview does only work for non-TOPS products and I would like to select the one with suitable baseline conditions to all other scenes.

Edit: Nevermind - the InSAR stack overview does it. If someone knows a tool which computes the baseline graph as well, I’m interested

@ABraun what do you mean with “baseline graph”? 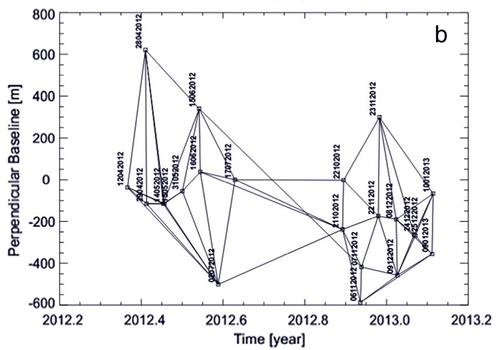 yes, that would be nice. Or at least some way to export the table from the stack overview.