L2A_Process --help fails and openjp2 cannot be loaded still in 2.2.1

hello, i am installing sen2cor2.2.1 in window7 OS and setup.py seems quite well except for the path string has problems with space in it. However, i can manually change the variable name and its path in system properties.

this is the environment variables before and after changing which i hope have no effect on latter warning and error.

the same question as Openjp2 is not be loaded the problem still exits here in window when installing 2.2.1 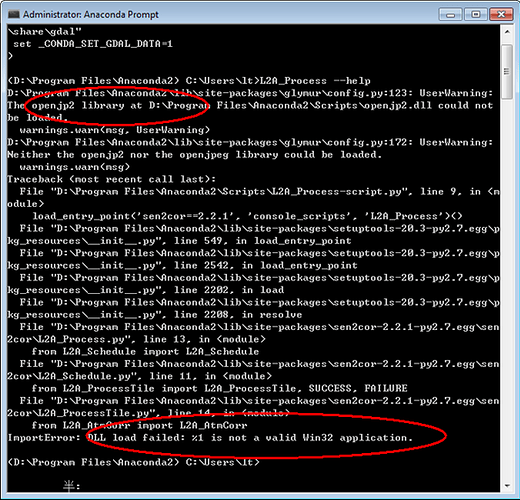 The latter error message seems to indicate that you are using a windows 32 bit version. Can you confirm?

Thanks for your reply.
The Win7OS is 64bit, but anaconda and python is 32bit because I have to use ArcPy, which is a library developed by ArcGIS requiring 32bit environment.

So I have to change back to 64bit if I want to install sen2cor?

Yes. 64 bit python is mandatory, as is stated in section 4 of the release note. This is clearly the reason why you run into that problems: glymur as well as the library for the atmospheric correction are expecting the 64 bit python.
32-bit Python is not compiled LargeAddressAware, meaning it will only be able to address 2GB of user addressable memory space per process thread running on either 32-bit or 64-bit Windows. This is by far to less for the atmospheric correction of the 10 m images.