No the problem is with mosaicing…look at this

Another idea, I made a mosaic and I think the resolution was changed after making mosaic. Yes. Now I got the point, making mosaic reduces resolution. Any idea about it? [PNG]

I just tried it with SRTM and they area also resampled to a lower reslolution.

I found its solution. We should manually adjust it. 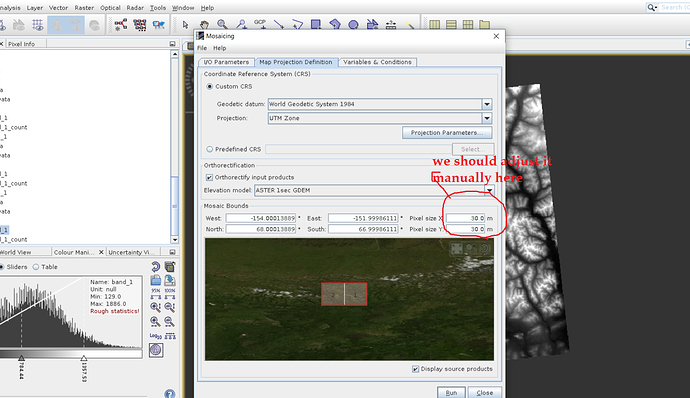 good that you found a solution.
Orthorectifying the DEM doesn’t make much sense to me. But as long as the result is not distorted, everything is fine.

I think because we have water in our interferogram (figure1). I do not know how SNAP does unwrapping and from where it starts to do.

How can I find unwrapping code or method that SNAP uses it for unwrapping? Do you have any idea about it? How this error would be solved? 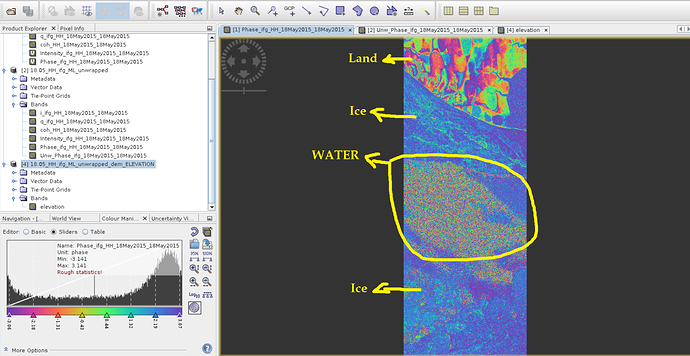 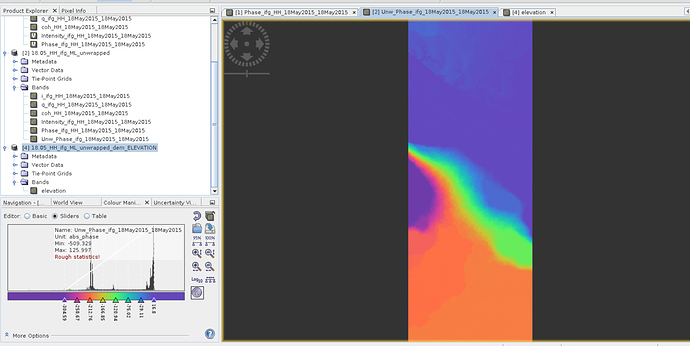 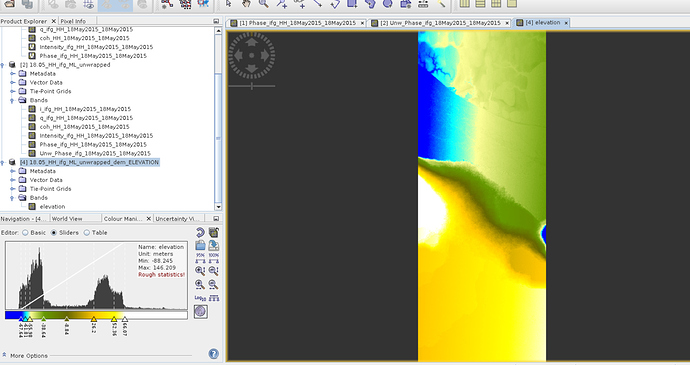 you can mask out low coherence areas in the image using a valid pixel expression as described here: Subsidence map in 3d view) but this unfortunately doesn’t affect the uwnrapping process.

I don’t know how these can be excluded from the unwrapping but the basic algorithms are explained here:
https://ieeexplore.ieee.org/abstract/document/1036000/
Chen and Zebker are the authors of snaphu, unfortunately, the page is currently offline: https://nova.stanford.edusar_group/snaphu/

Thanks but by this way, it only affects on coherence result, not interferogram. So, again unwrapping would be failed. 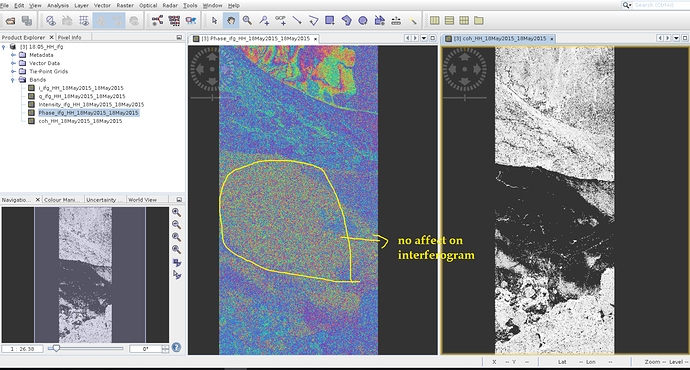 Is it possible that I use ‘special subset from view’ over interferogram and subset my area of interest OR should I do this over intensity before making interferogram?

by this way, it only affects on coherence result, not interferogram

It does, you use low coherence values to make these areas no data in the interferogram.

To your second question: this is possible for must sensors besides Sentinel-1 because of the bursts. Subsetting the interferogram for TSX/TDX is no problem!

Dear @ABraun
If we have two TanDEM-X pair (one in ‘18May in monostatic mode’ and another one in ‘29May in bistatic mode’), then it is possible to detect changes between them by using upper method that we discussed?
Thanks

There are two approaches:

Both approaches rely in correctly generated interferograms and high coherence in the areas that are of interest to you.

Yes. I did before with two bistatic pairs but I did not know it is also possible with one bistatic and one pursuitMonostatic. Thanks

Why don’t you just give it a try?

You don’t seem very confident about your ideas?

Based on our discussion, I did mosaicking to make an ASTER DEM over my area of interest but as you know, ASTER is a very flawed DEM and has lots of values over water (figure1). I want to ignore values over water.

I used mask option in SNAP but it did not work. 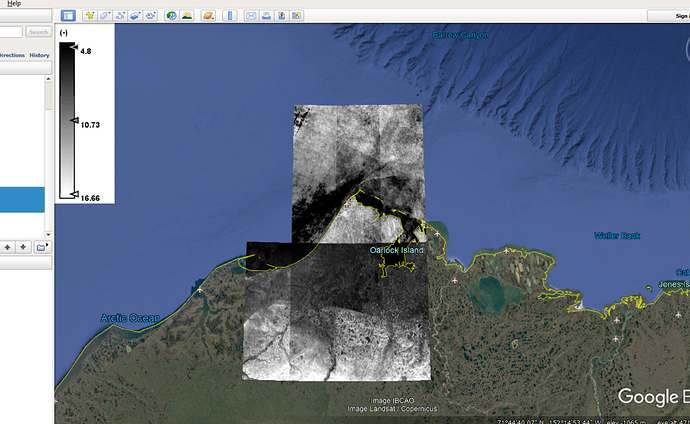 you could also try this one: https://www.eorc.jaxa.jp/ALOS/en/aw3d30/index.htm

But, similar to ASTER, it was based on optical data. If you mask out the sea areas before the terrain correction, you can select “mask out areas without elevation” as I mentioned above.

I think “mask out areas without elevation” is under ‘terrain correction’ tool and I tried it but it says it is possible only for SAR images but I want to apply on ASTER DEM. 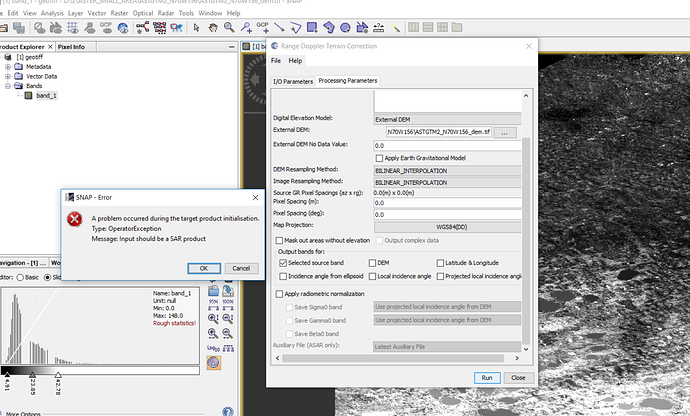 Yes, applying terrain correction on the ASTER DEM doesn’t work. You have use the product after “phase to elevation” and just repeat the Terrain Correction step.

But as long as all pixels are valid in the ASTER mosaic, nothing will happen.

Do you wish to include reference dataset into in your subset definition?

I again have same problem and although I converted bands and save them, again ask me below question.
Do you wish to include reference dataset into in your subset definition?

Then I chose ‘no’, result is saved but I cannot open the data but when I detete ‘valid pixels expression’ , then results will be opened but result has some extra part??? 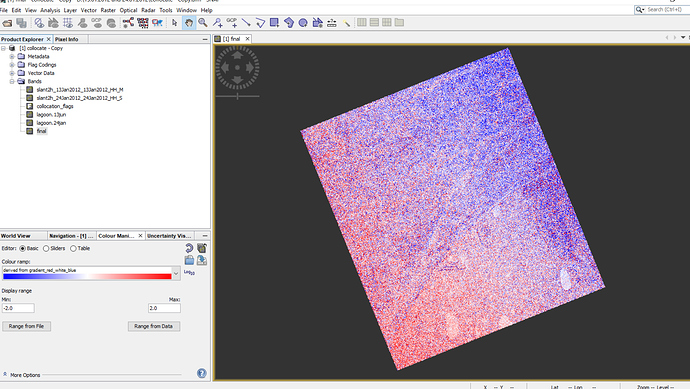 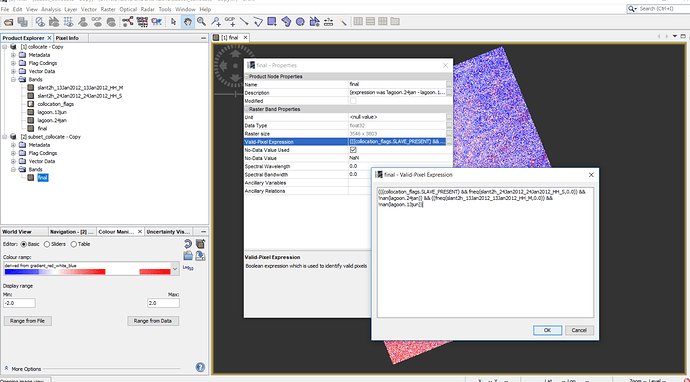 Figure2. Image is not opened before deleting ‘valid pixel expression’ 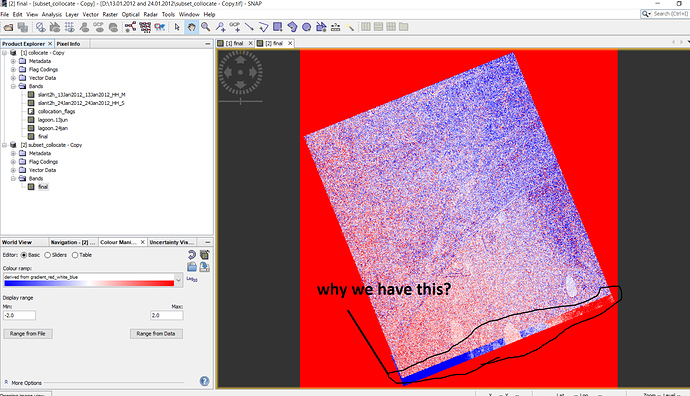 If the estimated raw storage size of your subset is 0.0 MB, your bands to export are only virtual.
Right-click these rasters > convert band and save your product. Close the product and open it again. You can then export parts of the product (single rasters) without being dependent from a maths expression.

If the estimated raw storage size of your subset is 0.0 MB, your bands to export are only virtual.
Right-click these rasters > convert band and save your product. Close the product and open it again. You can then export parts of the product (single rasters) without being dependent from a maths expression.

When I want to convert rasters, they look already converted. 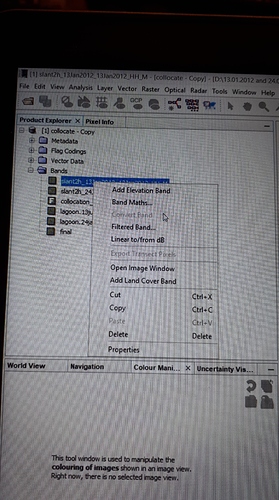 Where can I find ‘the estimated raw storage size’?