My experience with SNAP, StaMPS and COSMO-SkyMed

Hi, during the last few weeks I experimented a little bit with StaMPS and some COSMO-SkyMed data I have access to. Unfortunately, as I explain in the end, the result does not look very satisfactory for the moment. I will keep doing some experiments, but if in the meantime more experienced people are willing to help me, they’ll have my gratitude!

Having access to a copy of SARscape, I have run the same data with it, obtaining a much better result. Therefore I believe the data is fine. On the other hand I know people are routinely use StaMPS to obtain very good data, so the problem is clearly in how I am using it, not in the program itself.

Hopefully this can also be useful for other newcomers who want to do PSI processing with CSK. Although, admittedly, a tutorial saying that it doesn’t work is not that much worthy. Let me also notice that my aim with this analysis is to capture movements of single buildings (with respect to buildings around), in order to assess potential structural problems. So I am interested in the movements of single PSs, or localized clusters of PSs. I understand this is not the aim StaMPS was written for, but for the moment StaMPS is the only free software solution I know of.

I am working with 52 SLC images taken by CSK between January 2012 and December 2014, for a total of 3 years, of the area surrounding Venice, Italy. Images are polarized HH, taken on the same descending orbit, looking on the right, in Stripmap HIMAGE mode. All images are taken by the same satellite, CSKS1. More technically, all processed files have name starting with CSKS1_SCS_B_HI_01_HH_RD_SF, according to the CSK conventions.

I am using SNAP through its command line processor gpt. The graph I am using are inspired by snap2stamps, which I cannot use directly because they are targeted at Sentinel-1 data.

StaMPS preparation is done using 0.4 as initial threshold for amplitude dispersion. Then the following commands are given to change the StaMPS default values:

I took these default values from this tutorial, figuring out that the case “bridge” is the most similar to my study. Then I just run steps 1 through 8. I am not using TRAIN, because I haven’t really figured yet how to install it, although my understanding is that the troposferic component isn’t really important when one wants to study (relatively) small objects like single buildings.

Esportation to the StaMPS_Visualizer is done with the MatLab script provided by the author, except that I am using ps_plot('v-do') instead of v-doa (because I don’t have atmospheric correction data from TRAIN). Also, I am producing two different visualizations; one, that I dub “spot”, is what the exportation script produce: all the points around a user-selected center point, within a certain radius. The other one, called “decimated”, considers the whole analyzed area, but randomly takes just one point every ten to avoid overloading StaMPS_Visualizer.

The result is available here (sometimes it doesn’t work properly with Firefox; Chrome/Chromium seems to work better). The same viewer also shows the analysis generated by SARscape (a commercial, proprietary software for SAR analysis I happen to have access right now) on the same data.

Why I am not very satisfied with StaMPS?

Unfortunately the history of the PSs generated by StaMPS analysis often seem to be very noisy, especially comparing with SARscape results. If you go on the visualizer and click a random dot for a StaMPS analysis, you will probably see jumps of 10-15 mm around the linear regression, while SARscape points jump around 1-3 mm around the linear regression.

Beside the relative comparison, 15 mm is half the wavelength of COSMO-SkyMed X band SAR instrument. This means that it is very probably that the phase unwrapper got completely confused by this data and there is very little trust that the average unwrapped trend actually matches the linear displacement trend of the scatterer.

What do you think?

I am very newbie to this field; I am still learning a lot of things and no doubts I might have done mistakes in the analysis or fed wrong parameters to SNAP or StaMPS. Do you agree with the reasons I believe that data computed by StaMPS is not good in my case? What would you suggest to fix it?

Thanks for reading such a long post if you got there, and even more thanks if you have useful advice to spare!

Thank you for sharing your experiences.

Will have to look at it at more detail but my first guess for less noisy results would be a lower tolerable amount of random phase pixels and a larger temporal filters window.

Thank you very much for your sharing, you just did brilliant job and bring valuable questions.

First I agree with @ABraun’s thought that SARscape may use a larger temporal filtering window, which can greatly smooth the data and reduce the uncertainties to a very small amount. I have never use COSMO-SkyMed data before so I don’t know the general accuracy of this dataset. However, from my experience processing Sentinel-1 data, it is a normal case that the pixels leap 10-15mm (or even larger) even after tropospheric correction by GACOS.

Regarding phase unwrapping, I think you have made a good point. I would first suggest setting the ‘unwrap_grid_size’ to 0 so that no resampling is applied during unwrapping, making the pixels are tighter and less affected by aliasing. Another very important reason why StaMPS can’t get a correct result is that your experimental area (the Venice City) is divided by water and each part of them is actually unwrapped individually so they just can’t be processed together. While for SARscape, if I remember correctly, they use a 2-D phase unwrapping method and unwrap the continuous interferograms before PS processing.

That’s all I have now, and I will complement later if I find anything new.

Which mode of CSK was used?

Hi, mode is Stripmap HIMAGE. I started working from SCS_B images. All filenames start with CSKS1_SCS_B_HI_01_HH_RD_SF.

(I updated the original post with this information for clarity)

Thanks everybody for the help, I’ll try your suggestions in the next days and post updates here.

Thank you for share your experience. Proximately, I will process Cosmo-Skymed HIMAGE and I didn’t know if this imagery is compatible with SNAP-StaMPS workflow, now I know it’s possible to process it with a relative similar workflow.

It would be great if you share your results in order to visualize it and give you more opinions.

Hi.
Where can I download COSMO-SkyMed data, globally and not just the small samples of ESA or other pages about geohazards?

Where can I download COSMO-SkyMed data, globally and not just the small samples of ESA or other pages about geohazards?

short answer: Nowhere, because the data is commercial.
long answer: you can search and order data here or apply for a small quota within ESA’s TPM program: https://earth.esa.int/eogateway/missions/cosmo-skymed

To add to @ABraun’s answer, a portal called Cleos was recently launched for the dissemination of (among others) CSK data. Unfortunately you have to pay there too, except for specific circumstances (i.e., if you’re an Italian enterprise, you can have free access to the MapItaly project, which periodically maps the whole Italian territory in Stripmap HIMAGE mode; and anyway, though in theory being eligible for this free data, I am having a very hard time actually receiving data: the portal still seems to have a lot of technical problems).

Consider also that, as far as I am aware, CSK coverage is much spottier than Sentinel-1. I don’t think it consistently cover the whole world like Sentinel-1.

Hello all! I have read the complaining about the results of StaMPS and I want to share mines so we can discuss them. I analized a time series ranging between july2020-july2021 where a M 4.6 seismic event happened the 23th of june of 2021 in Mendoza.
This is what I obtained (The event happened at the north of the lake that looks copletelly white) 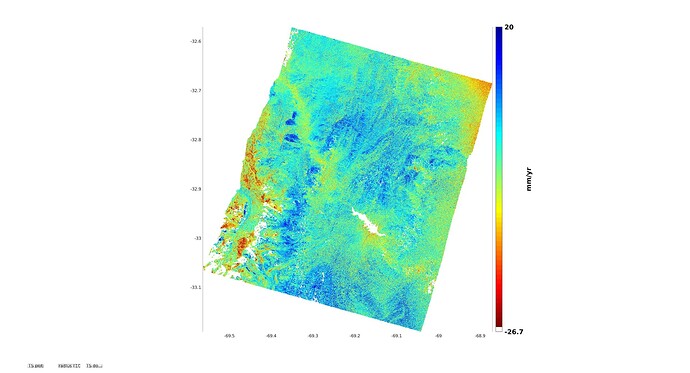 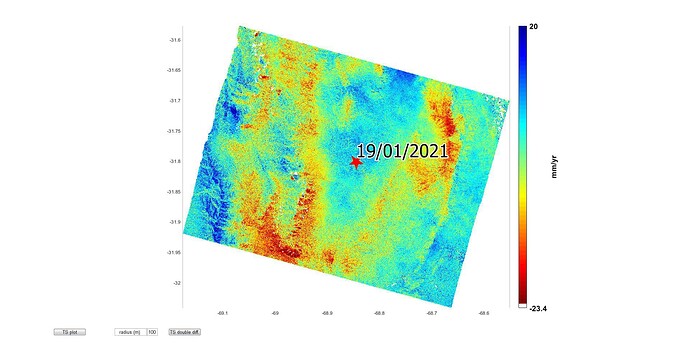 I strongly believe that you should tune the stamps parameters to avoid phase unwrapping errors.
It takes time to get familiar in what to change.
I hope this helps

Hello Mr. Delgado! I really appreciate your advice!! What evidence in my results led you to suggest that? Thanks in advance! I want to learn about this.
I found this document online that may help me http://eoscience.esa.int/landtraining2018/files/materials/D3B2_Stamps_S1_PS_Exercise_2018.pdf
I will share 5 of the 64 sample graphs corresponding to the Mendoza seismic event. 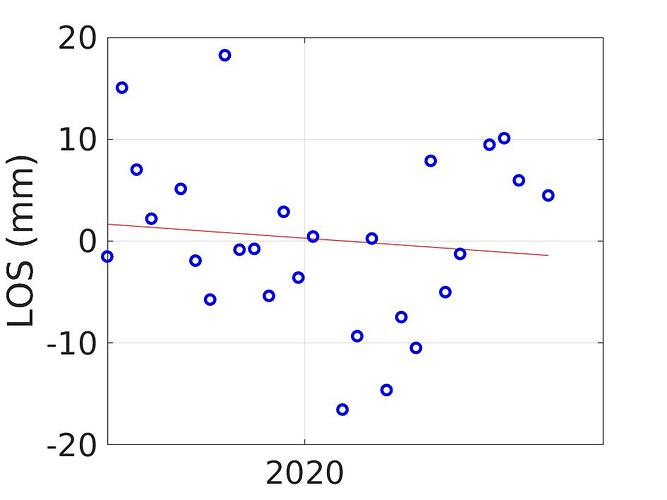 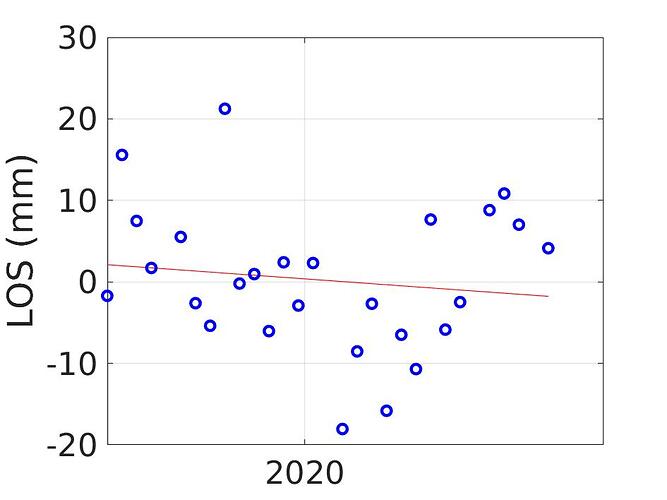 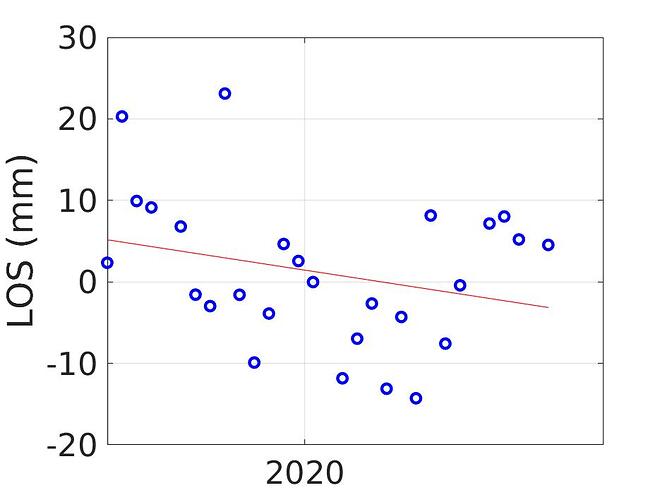 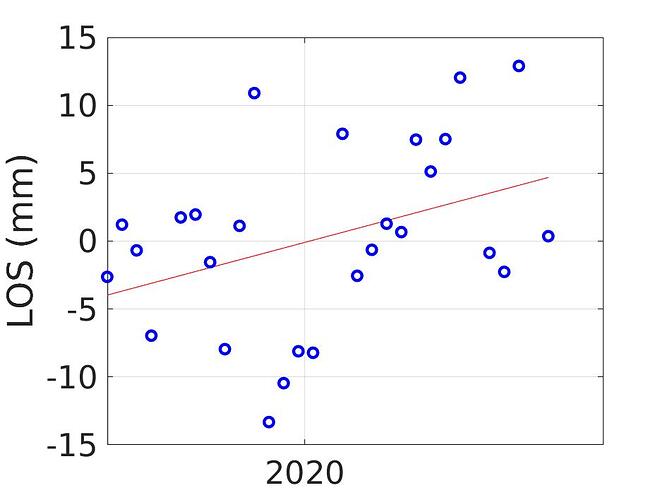 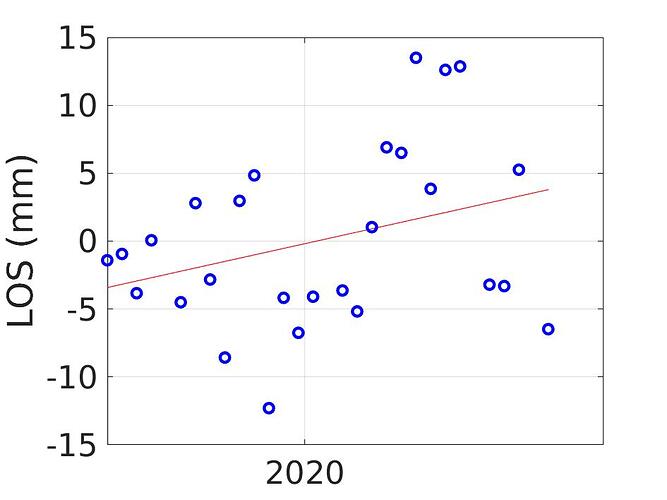 They do not seem to be such errors as I have thought reading your previous post.
Unfortunately APS can affect up to 1-2cm. I suggest you to try to apply any filter or method to reduce them…

Ok much appreciated! So I will learn about APS because it can affect the quality of the results. I always run steps 1 through 8 in StaMPS that I undestand try to tackle the atmospheric effect.

step 8 does apply spatial filters, which try to mitigate APS as all filters do.
There are more advanced ways to try to tackle APS more effectively. See for example TRAIN toolbox from Dr. Bekaert.

I will definitely start learning about TRAIN and in the future post what I get. Thanks for the help!

hello, I have used 17 images of Cosmoskymed following the comments of this post, however when I get to the export step
I am presented with the following message: 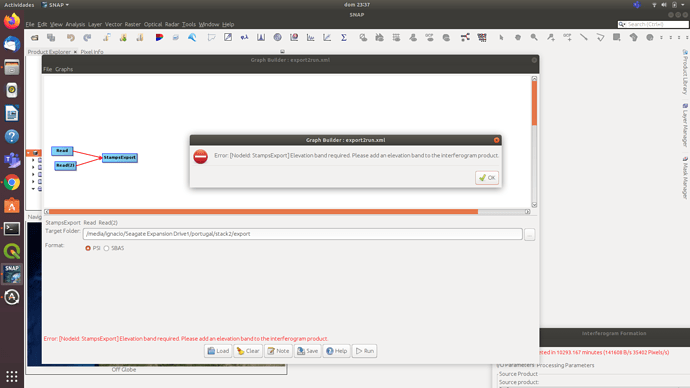 (I guess this error is due to not having selected the output elevation and the output orthorectified lat/lon options in the interferogram formation. Is it possible not to start the whole process? (It has taken me 1 week to generate all the interferograms and it is very frustrating to start over))

Finally 1 more questions, can I use the command

for the initial threshold for amplitude dispersion?

You can manually add elevation and lat/lon bands in the Band Maths. Right click > band maths > edit expressions > constants: lon (then lat). Uncheck “virtual” option and save to make it permanent.
Elevation can also be added via right-clicking > add elevation band.