Dear all,
I have problems with Elevation Band.
In Snap (i use 5.0.4 version) if i add Elevetion Band in a image (select a band, right click, add elevation band) I obtain elevation values incorrect.
In the following screenshot i put a pin in the sea: I expected that the elevation value was 0 or a null value, but the elevation is about 47 meters.
I also checked the other elevation values of the map and even those are wrong.
The same problem arises also with the elevation band’s output in Topographic Phase Remove and with DEM band’s output in Range Doppler Terrain Correction using both Snap internal dem (SRTM, etc) and external dem.
Do you have idea why it happens?
This problem could cause wrong results in DinSar processing?
Thanks a lot to everyone. 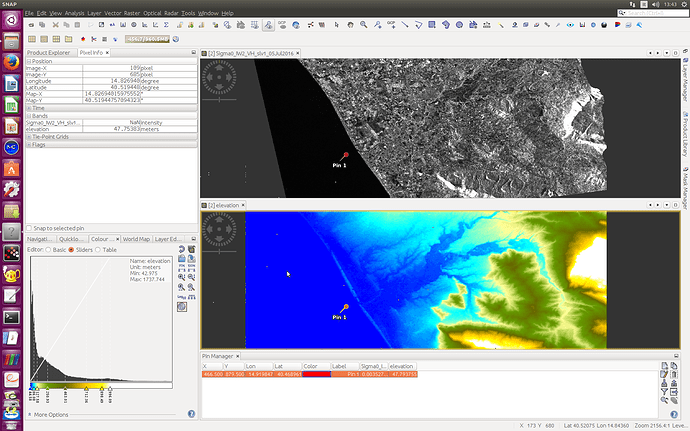 SRTM elevations are given as distance to the WGS84 ellipsoid, which does not follow mean sea level (which follows the geoid). In other words, sea level not being at 0m everywhere is a feature, not a bug

mengdahl thank you very mych for your help.