By selecting VV polarization and IW1 subswath I have applied the following interferometric processing:

And I got these results for coherence and interferometric phase (I only used matlab to generate the maps): 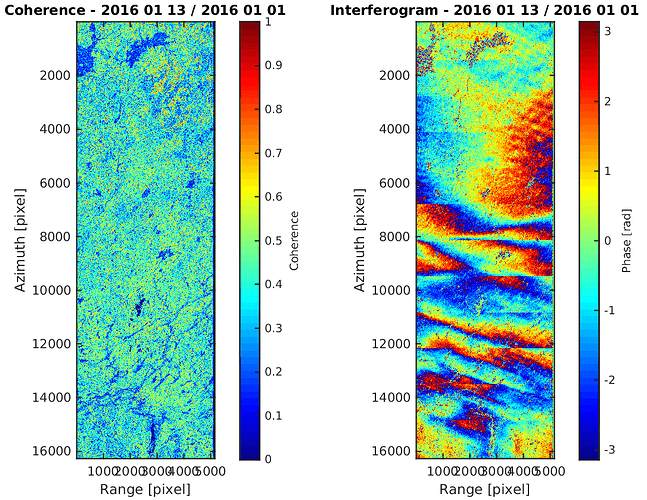 As we can see, there are some strange artifacts in interferometric phase which are clearly correlated with the bursts borders.

So in an attempt to mitigate these artifacts I repeated the processing but I used the “S-1 Enhanced Spectral Diversity” after the Coregistration step in the interferometric processing listed above. The results were even worse: 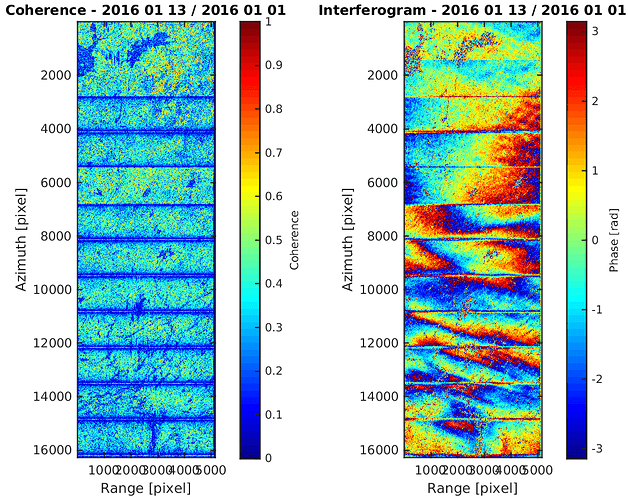 My question is: Is this the right approach to deal with this problem? If it is, am I doing something wrong? Why am I getting so bad results?

PS: I’m using the precise orbits and the ASTER DEM.

Which version of the software are you using? There was a recent module
update 3.0.4 which addressed phase jumps from products processed in
2016. Go to Tools -> Plugins and check for updates.

I’m using the latest version, for when I click in “Check for Updates” I get a message saying: Your application is up to date! 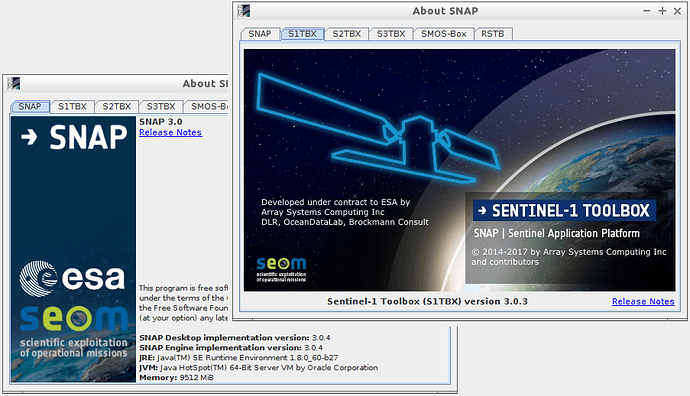 I don’t know if it is important but I have been using snap through python scripts (snappy).

I have processed two other images over the same location and I got similar artifacts, though they are dimmer.

This problem raised me some doubts about whether I have chosen the right approach.

Is the “S-1 Enhanced Spectral Diversity” intended to overcome this kind of errors? (When I click the help button nothing happens)

If it is, have I applied rightly?
That is, after the S-1 TOPS Coregistration and before the Interferogram Formation?

Were you using restituted or precise orbits?

I am using precise orbits.

I am farly new with dealing with SAR data, I have a methodology where I know that I need to do first some coregistarion and resampling of my images. I want to perform coherence and intensity correlation analysis.
I got 3 image.

All of my images cover the AOI that I want. They are all ASCENDING and have VH-VV polarization. Which i believe is important for what i want do to. The thing is, that they cover the same AOI, but they are not the same track, meaning like they are from different positions.

This means that for example the sub-swath of one image lets say IW1, matches with the sub-swath IW3 of another image, but only partially or some times not even. What do you recommend to do in this case?

I was thinkign about extractin the area of interest first from the images, but dont know how to create a single of image of all the sub-swaths and then subset my area.

Please ignore my last msg. I have figured out how my images need to be acquiered. Thank you so much!

Your work (appart) from the artifacts that you are getting, is very nicely done. I need to do coherence correlation analysis and was wondering if you could share with me some of your methodology to get the coherence and interferometry images.

However, I do not understan where can I check if my co-registration was successful or accurate? As you can see I am relally new at all this SAR data and would really appreciate your help.

After doing ESD Coregistration, can someone explain me please, how to interpret the results of the co-registration, to say it was good or bad?

Hi
I have problem about coregisteration of sentinel1 tops 2016 data
when I want to coregister the image S1 TBX says that" can’t download precise orbit file . you should download it and placed in a folder " I do it correctly but it doesn’t work!!
what should I do?

the software itself said that download orbit file from https://qc.sentinel1.eo.esa.int/ and placed it to C:\AuxData\Orbits\Sentinel-1\POEORB\2016

for the newer versions of SNAP the location of the aux folder has changed:
have a look if this folder exists

unfortunately I don’t have this address! 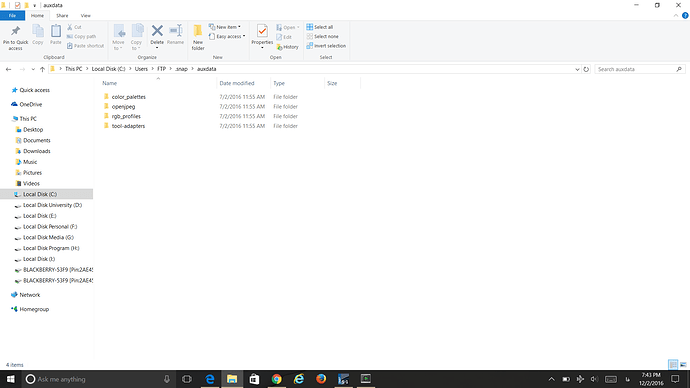 You could also try to apply an orbit file to another image so the folder is created automatically by SNAP.

Thanks for your guide but it doesn’t work for me! 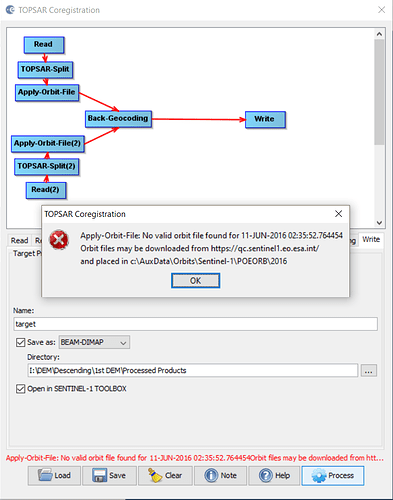 Hello
In auxdata folder create this root:
Orbits\Sentinel-1\POEORB\2016
if image acquisition date is different, change 2016 to appropriate year.
Then paste the orbit file (with .EOF or .zip extension) in created root.

Thank you Javad
I do it but it doesn’t work
I had S1TBX version 1.1.1 and update it to version 5 and this problem solve

Hi
do you know how we can choose the best polynomial degree for apply orbit file?