I’m wanting to determine the heading, or azimuth direction, of the Sentinel-1 satellite for a given interferogram I have produced over the Andes, so that I can find the satellite look vector relative to the ground surface.

I’ve looked at the metadata for the interferogram, but the heading doesn’t seem to be given explicitly, only the locations of the edge pixels are given (granted from which you can determine the heading).

Is there an automated way to find the Sentinel satellite heading direction in SNAP?

Go to the layer manager and add the mapping tools layer. Add look direction. You will get a cyan arrow representing the look direction overlaid on the image. It should be easy enough to add another for satellite heading. I’ll add it.
The overlays are useful after your interferogram has been projected.

Thanks for the information.

Although I can now see the look direction graphically, what the geodetic modelling community really needs is a quantitative value of the look vector orientation, which can normally be generated with a knowledge of the satellite azimuth, incidence angle and the assumption the look vector is within the vertical plane parallel to the range direction, which I’m not sure is valid for the TOPSAR mode (what we really want is the unit length look vector in North-East-Vertical co-ordinates relative to the ground).

Clearly this information is stored somewhere in the metadata in order to generate the look vector through the mapping tools, but I’m not sure how to access it. Is this also a feature that could be easily built into SNAP?

Ok we’ll add it to the overlay as well as to the metadata so it’s accessible from command line processing. Thanks

I wonder that this update has been applied or not?
Other than the yellow north arrow, It would be such a big help if SNAP could give quantitative measurement of this heading direction, especially with any post-processing work with other software. For now, i still calculate it manually, without any “official” azimuth direction comparison.

Thank you, so much.
Fabian

Is there any news on this? I too would like to be able to azimuth direction or look direction from the metadata. I am after the quantitative result, not an image layer, for further processing.

Is it reasonable to use 90 degrees to the right of the azimuth direction for the look direction? I am using orbit corrected, calibrated, ellipsoid corrected L1 GRD IW data, so I think the azimuth look direction movements used to make up the SLC image are averaged out in the further processing.

Heading, azimuth direction, of the Sentinel-1 product is provided in metadata as “platformHeading”.

It is explained in Sentinel-1 Product Specification as follows

Is this information what you are looking for?

Hi,
How do we calculate the heading angle for ALOS-2 Level 1.1 data?
The metadata shows blank values in its place.
Any help is appreciated.

did you open the ALOS-2 product with File > Import > SAR sensors > ALOS-2?

You can also insert the flight direction in the layer manager.

Yes, I have exactly done that.
Still there is no option in layer manager to add flight direction. 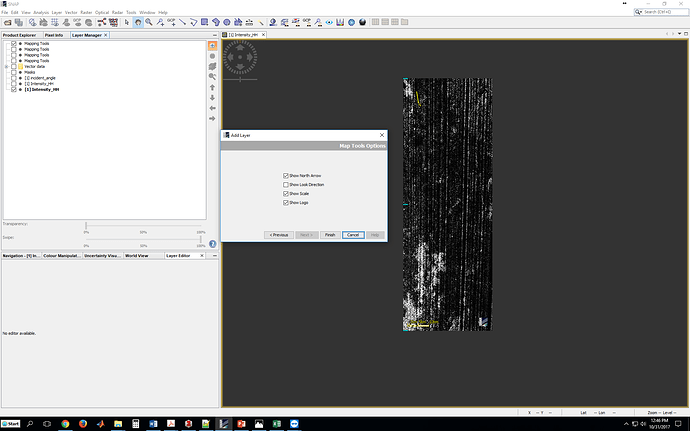 Hi,
This is related to my previous question on calculating the satellite heading angle.
Visually we can see the true north and flight direction.
But can we get a value for the heading angle from the software? since in ALOS-2 Level 1.1 metadata there is no value

I can imagine that it is somewhere hidden in the metadata but I don’t know exactly either, sorry.
Have you tried the search for metadata?

Yes, I have searched the metadata completely.
In the ALOS-2 SAR Product Description Manual it says ‘blank’ for platform heading angle. Also while reading the metadata in SNAP, there are no values.
So I wish to inquire if there are other means of finding the metadata from the other satellite parameters.

Hi, I am trying to find the value of the heading angle for ERS2 data. I can’t find the platformheading parameter you are talking about. Furthermore, for the modelling I am doing I would be better to obtain a file similar as the incidence angle. Is that possible ?

I’m not sure how the platform heading angle is defined but it should be equal to (or derivable from) the orbit inclination. 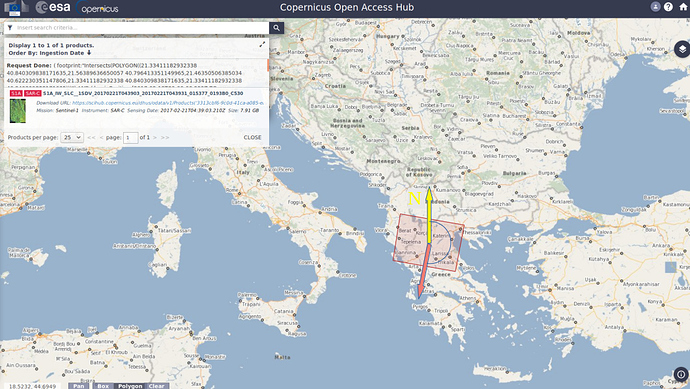 image.jpg1059×598 287 KB
When i open the product in SNAP v6 i can see the yellow arrow that denotes the North. The direction of the yellow arrow make sense because of the way that the Sentinel-1 sensor “writes” the data. After a mirroring in the E-W direction the angle between the azimuth and the yellow arrow looks like the blue arc in the scihub printscreen. Looking at the image, I expect that the heading angle is greater than 180 degrees (assuming that clockwise direction is positive). 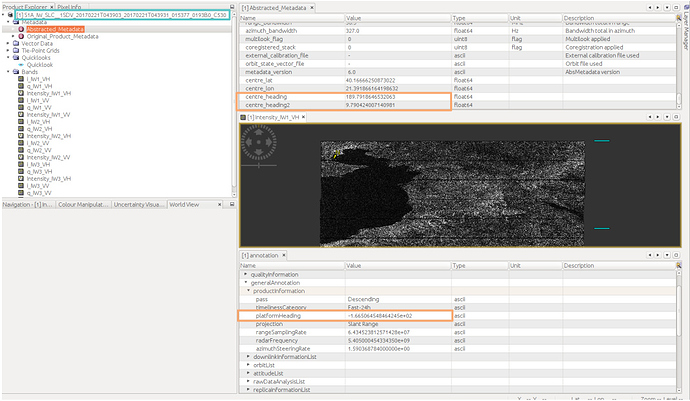 Let me now ask these questions.

I realize that this is already an older topic, but since I am basically struggling with exactly the same questions as @kleok and there isn’t a definite answer yet I didn’t want to open a new thread.

Specifically, I am trying to convert LOS displacement data from a PSI-analysis into vertical and horizontal displacement. In order to do so, I need the difference in satellite heading between ascending and descending orbits. While this shouldn’t be too complicated, I got somewhat confused when having a look at the S-1 metadata.

The product specification only states that platformHeading indicates the platform heading relative to North [degrees] (in azimuth direction). It can be observed that the value for platformHeading changes slightly across the three sub-swaths.

However, I am still unsure whether it is correct to use the differences between center_heading or rather the platformHeading of the respective sub-swaths for both orbits.

On a sidenote, I am slightly baffled by the fact that there doesn’t seem to be an easily accessible metadata description of S-1 data. The above mentioned Sentinel-1 Product Specification, is helpful to some extent, but does not seem to contain all information, though.

Abstracted Metadata is constructed by SNAP, I assume to harmonise the metadata parameters of the various satellites. I don’t think centre_heading and centre_heading2 are Sentinel-1 parameters - at least they don’t show in the Product Specification doc - so they are purely SNAP parameters and you have to look at SNAP documentation/ask SNAP team to find what their meaning is.

platformHeading is a Sentinel-1 parameter, and I’d take it to be the most accurate value for the satellite azimuth heading.

It can be observed that the value for platformHeading changes slightly across the three sub-swaths.

On a sidenote, I am slightly baffled by the fact that there doesn’t seem to be an easily accessible metadata description of S-1 data. The above mentioned Sentinel-1 Product Specification , is helpful to some extent, but does not seem to contain all information, though.

Are you refering to platformHeading, or to other cases?